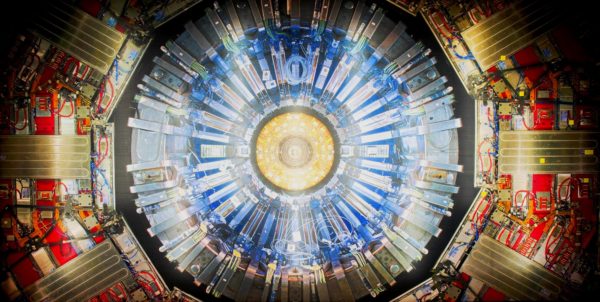 From celebrating zones of wonder to geeky collaborations, art is an integral part of science communication …

It is not surprising then that art should headline as part of this year’s National Science Week (13-21 August) and offer a moment to reflect and recalibrate how integrated the arts and science have become.

This list of exhibition demonstrations how that play in the petri dish continues to find fresh conversations.

Get inside the Large Hadron Collider

The world’s largest science experiment buried deep under the border between Switzerland and France – CERN’s Large Hadron Collider – has come to Sydney’s Powerhouse Museum as part of a city-wide program of exhibitions, talks and workshops for the 2016 Sydney Science Festival.

This immersive exhibition from Science Museum, London blends theatre, video and sound art with real artefacts from CERN to recreate a visit to the famous particle physics laboratory.

‘With its recreated tunnels and work spaces this is the place where the very hot meets the intensely cold, where the big sits alongside the extremely small and where art and science intersect,’ said Museum of Applied Arts and Sciences Director, Dolla Merrillees.

See history being made. Meet ‘virtual’ engineers who build the impossible and snoop around their benches. Walk the tunnels of CERN. Stand in the heart of a collision. Witness a moment of discovery. Step inside the world’s greatest experiment.

‘It is the perfect representation of the Museum’s ongoing commitment to showcasing human innovation and the intersection of art, science and technology,’ she added. ‘This exhibition puts visitors at the heart of an experiment that recreates the conditions that existed just after the Bing Bang occurred 13.8 million years ago.’

The precise circumference of the LHC accelerator is 42,903 km, containing thousands of the world’s most powerful magnets and could also be described as the world’s largest fridge. When in operation, trillions of protons race around the LHC accelerator ring 11,245 times a second. When the beams collection they generate temperatures more than 100,000 times hotter than the heart of the Sun.

Now you can do the impossible and stand in the middle of that collision.

Powerhouse Museum is additionally a venue for the Sydney Science Festival, an 11-day program in collaboration with museums, galleries, universities, businesses, scientists, engineers and community organisations. It attracted 39,000 participants across 132 events last year.