You are here: Home » Articles filed under: 'News' » Article: 'Challenges for AWM & government in'

Challenges for AWM & government in 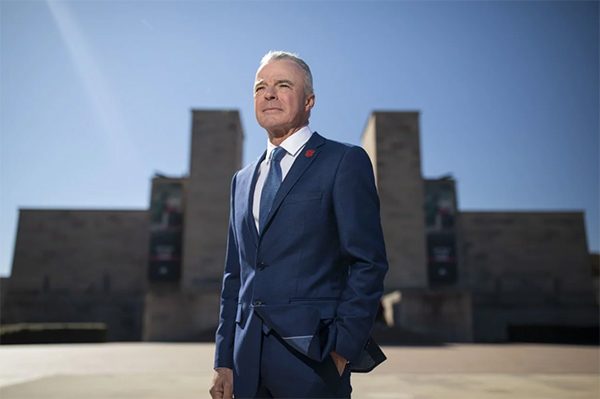 In Australia’s quest to become one of the world’s leading weapons exporters, the line between government and industry is becoming increasingly blurred.

He politely asked the outgoing head of the memorial, Dr Brendan Nelson, exactly how much had been given during the seven years of Nelson’s tenure in the job. Equally politely, Nelson said he didn’t know for sure.

But Nelson didn’t end his answer there. Instead, he engaged in a bit of advertising – for the War Memorial itself, saying he wished more such companies would donate money; and for a couple of the arms merchants. Lockheed Martin, the world’s biggest weapons maker, got a brief mention for having given $1 million. But Nelson went on at much greater length about a second donor, Boeing, which also had kicked in $1 million.

“The only reason we had an Afghanistan exhibition open on August 13, 2013, was because Boeing gave us $500,000. That was the only way it happened. On the night of the opening, the then chief of Defence, now our governor-general, General Hurley, spoke very proudly. Then prime minister Rudd, opposition leader Abbott [and] I spoke and I asked the Boeing representatives to speak,” Nelson lauded.

Nelson ended his answer a little defensively. Not “a single person” had criticised Boeing’s involvement, he said, “in fact quite the opposite”.

From there, things became hostile. Steele-John complained that under Nelson’s leadership the AWM had lately ceased reporting the quantum of donations in its annual report. Then came this statement from the Greens senator, who is the party’s spokesperson for peace, disarmament and veterans’ affairs:

“I personally find the involvement of weapons manufacturers in the memorial – and indeed their contribution to the memorial – to be morally repugnant and a stain upon the institution of the most profound nature,” Steele-John said.

There was an immediate pile-on. Liberal senator David Van called Steele-John’s views “repugnant” three times and also “rubbish”. Committee chair Eric Abetz hastened to assure Nelson that “everybody here” disagreed with the Greens senator. A series of paeans of praise for Nelson followed from both Coalition and Labor senators, before Abetz wound it up by inviting all present to join in a round of applause for the outgoing AWM head, who would not appear again at the hearing before his contract – salary package worth $470,000 – expired on December 31.

On January 20, three weeks after the end of that contract, came the media release: Dr Brendan Nelson, AO, had been chosen as the new president of Boeing Australia, New Zealand and South Pacific, and chairman of the board for Boeing Australia Holdings. Salary undisclosed.

And so, says former public servant David Stephens, Nelson has touched all three bases of what Stephens calls the “military industrial commemorative complex” – first as minister for Defence, then as director of the AWM, and now as Australasian boss of the world’s second-biggest weapons manufacturer.

Stephens is convenor of a group named Honest History, which includes historians, former Defence officers and diplomats, concerned about what they see as the militarisation of Australian history. They contend the AWM is becoming less an archive and memorial than a celebration of military might – a shift that began before Nelson took the director’s job but has accelerated greatly since. They are critical in particular that the $500 million expansion of the AWM, approved by the Morrison government and announced by Nelson in November 2018, will further push the memorial down this path.

In fact, says Stephens, Nelson was a full member of the complex long before he got his job with Boeing. Almost five years earlier, as AWM director, he took a position on an advisory board to the French company Thales, another of the world’s top 10 arms makers. Under the rules that apply to the AWM director’s job, the acceptance of paid outside employment may be grounds for termination. But Nelson undertook to donate his board fees to the AWM and was granted an exemption by the government.

So the AWM got a little more cash. It also subsequently put on permanent display a protected military vehicle known as the Bushmaster – made by Thales Australia. In a media release, Nelson pronounced himself “honoured” to have it, sang the Bushmaster’s praises and said the display would allow visitors to “get a sense of the danger Australian soldiers endure while on deployment”.

Of course, the display could also be seen as a permanent advertisement for Thales. This is what infuriates Steele-John.

“You go into the War Memorial and the first thing you see to your right is a revolving billboard with the logos of the manufacturers – Boeing and Thales and the rest – that have donated. Companies that are profitable because of the very men and women that gave their lives,” he says.

And while his concerns might have been humiliatingly dismissed by his senate colleagues in that estimates hearing three months ago, he is far from alone.

“I think it’s pretty tacky having Defence companies’ corporate branding involved with the War Memorial,” says Paul Barratt, a former head of the Defence Department. “The memorial was supposed to be a place of great solemnity, to remember our glorious dead.”

Barratt sees this, though, as only part of a much bigger issue: the revolving door that spins ever faster between government and military manufacturers as Australia pursues the goal of becoming a major player in the global arms trade.

He recalls that early in his public service career, when he worked in the Defence section of Treasury, the government and bureaucracy were very leery of that trade.

“We would not sell ‘arms or warlike stores’ – that was the phrase – to pretty well anyone except the Brits, Americans, Canadians and New Zealanders,” Barratt says. “The concern was we wouldn’t know where they’d end up or what they’d be used for, that they might ultimately find their way into the hands of insurgents or be used against oppressed minorities et cetera.

“Now our objective is to be one of the top 10 arms traders. You have to ask where this is leading us. You’re going to have senior executives and companies having to meet KPIs about selling some number of millions of dollars’ worth of kit, and in order to make those KPIs they’ll identify a customer that just requires us to bend the rules just a tiny bit. And they’ll go to the minister and argue that it’s about jobs.”

And indeed, that’s exactly what they argue. It’s what then prime minister Malcolm Turnbull argued in January 2018, as he unveiled a new “Defence export strategy”, underwritten by a $3.8 billion export facility to finance Australian manufacturers and help them sell overseas. Turnbull lamented that Australia sold “only” $1.5 billion to $2.5 billion worth of military kit overseas.

In purely financial terms, the scheme might be counted as a success. The value of Defence export permits issued for 2018-19 was more than $4.9 billion.

But the line between government and the military has become worryingly blurred, says Michelle Fahy, a researcher and writer on the arms trade.

“There is a body called Team Defence Australia. It’s a bringing together of Defence industry and government and they go off to arms trade fairs around the world selling weapons together,” she says.

The Team Defence website includes a rolling list of arms fairs around the world, and promises prospective weapons sellers that it “procures the floor space and builds the exhibition stand, with companies only needing to finance their flights and accommodation”.

This reality was underlined again only last week, when the results of a freedom of information request by Guardian Australia came back. It sought details on almost 100 export permits relating to weapons sales in 2018-19 to Saudi Arabia, the United Arab Emirates, Sri Lanka and the Democratic Republic of Congo – all of which have been accused of war crimes.

“Save for their existence and confirmation of country of destination, the documents are almost entirely redacted by the government, which has argued the information is commercial-in-confidence,” it reported.

Such secrecy is likely part of the appeal for global weapons makers to invest in Australia.

Serena Lillywhite, chief executive of Transparency International Australia, says Australia is exceptionally secretive. That is troubling, she says, “because the Defence sector is particularly corruption-prone, simply because of the fact that more often than not the deals and the procurement is done behind closed doors”.

Regardless of whether there is corruption, there is certainly a vast and growing amount of influence-buying. Thus it is perhaps unfair to single out Nelson’s case, for a large number of former politicians, staffers and ex-Defence personnel have done as he has.

Fahy keeps a list, and it is long. For every case that attracts controversy, such as Christopher Pyne’s recent jump from the Defence portfolio into the military-industrial world, many go largely unnoticed.

For instance, former Labor opposition leader and ambassador to the United States Kim Beazley was appointed to the board of Lockheed Martin in June 2016. After he left the board to become governor of Western Australia, he was replaced by former Liberal minister Amanda Vanstone.

In the 2019 WA budget, Beazley was given an extra $1.4 million to help him lobby for WA – as its governor – to get, among other things, a bigger share of Defence contracts.

The recently retired chief of Defence, Air Chief Marshal Mark Binskin, parachuted into a job with aerospace company BAE Systems. Likewise, former army chief Lieutenant-General Peter Leahy found a place on the board of EOS, an Australian firm that gained much negative media recently after it was revealed to be exporting weapons to UAE.

The revolving door works both ways: Jim McDowell was chief executive of BAE Systems in Australia and turned it into the country’s biggest Defence company, before being transferred to run the company’s operations in Saudi Arabia. In 2018 he became head of the Department of Premier and Cabinet in South Australia, which, Fahy notes, “prides itself on being ‘The Defence State’ ”.

There are many, many more examples. But the bottom line is clear: war may be futile, but it’s also very, very lucrative.