You are here: Home » Articles filed under: 'News' » Article: 'Challenges for ethnology collns' 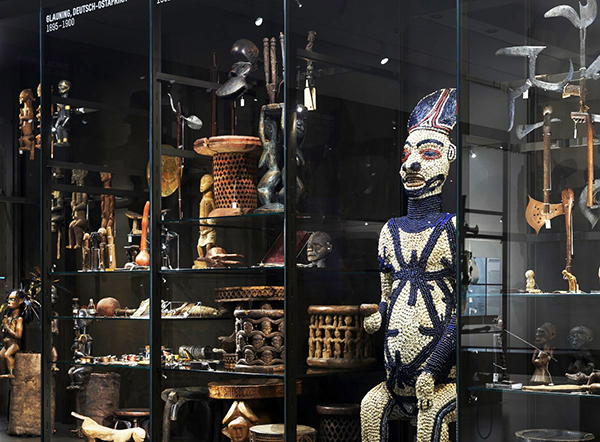 Exhibition view of the module “Open Storage Africa. Appropriating objects and imagining Africa” of the Ethnology Museum in the Humboldt Forum (all photos by Alexander Schippel, and all © State Museums in Berlin / Humboldt Forum Foundation in the Berlin Palace).

The Ethnological Museum and Museum of Asian Art were not included in the Forum’s grand inauguration in July, but instead, quietly opened in September.

Humboldt Forum bashing has become something of a participant sport in the world of cultural journalism. Much has been written about the spectacularly misconceived project of building a replica of Prussia’s former imperial palace and using it to house the collections of the Ethnological Museum of Berlin. To say that it is controversial is the polite way to put it. “Dead on arrival,” as art historian Bénédicte Savoy termed it upon resigning from the advisory board, would be another. Resurrecting the ghost of the Hohenzollern dynasty, largely responsible for German colonialism, the Herero and Nama genocide and the First World War, is not the kind of retro look that’s fashionable this millennium.

If ever there was an opportunity for brilliant curatorial efforts to step up and save a sinking museological vessel, the faux chateau marooned on Berlin’s museum island is it. Easier said than done. As Abby Klinkenburg argued in a recent opinion piece, no matter how progressive the content of its exhibitions, the Humboldt Forum’s mangled conceptual framework and problematic architecture put a damper on the best-laid plans. Even so, the new institution is bristling with good intentions and trying hard to please — from the friendliness of everyone who interacts with the public (an unusual feature in a city famed for its hard-nosed attitude) to the earnestness with which it tackles the intertwining of art, colonialism, and environmental destruction in its first temporary exhibition, Terrible Beauty: Elephant – Human – Ivory. 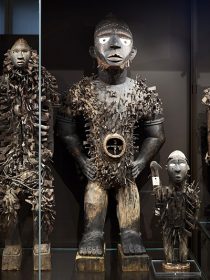 Given the backdrop of criticism and protests, the stakes could hardly be higher for the Ethnological Museum and Museum of Asian Art, the two permanent collections at the heart of the complex. Their removal from the outlying district of Dahlem to the museum island was a pillar of the project, meant to symbolize the newfound centrality of non-Western art to Berlin’s cultural sphere. They were not included, however, in the forum’s grand inauguration in July, but instead, quietly opened their doors in September. Another three months have passed, and still less than half of either museum is open to the public. The remainder is promised for mid-2022, including, crucially, the Benin bronzes that will go on show one last time before being repatriated to Nigeria. In the absence of so much of the exhibition plan, the galleries that are open can hardly be expected to work miracles. Even so, they manage to disappoint.

Upon entering the Ethnological Museum, visitors are confronted with an installation on Germany’s colonial past. In white letters against a black background, a huge banner reads: “I have a white frame of reference and a white worldview.” The words chosen to mark the entrance to one of the world’s leading ethnological museums are not by Franz Boas, the German-born pioneer of anthropology and father of cultural relativism. Nor are they the words of some fierce contemporary critic of the ethnographic museum project, such as James Clifford. They are taken from Robin DiAngelo’s 2018 bestseller White Fragility, setting the tone for an exhibition that is a monument to White guilt. Did it not occur to anyone that the epigraph to the museum’s African collections could be an African voice?

In the subsequent galleries, nearly every text revolves around the sins of European colonialism. As a result, the focus is, once again, not Africa but Europe. With that moralizing one-upmanship that has lately become a mark of Germany’s “culture of remembrance,” the myriad accomplishments of African civilizations are subsumed by the monolith of German penance. Despite the abundance of African objects on display, the voices of the continent are hardly heard; its vibrant life is reduced to the totemic stiffness of overstuffed vitrines.

This is especially palpable in a large gallery named “Open Storage Africa,” which purports to stage a museum storage room. Display case after display case hold a bounty of masks, figures, blades, drums, seats, combs, pipes, ivories, ceramics, baskets, all with museum tags attached but otherwise unlabeled, except for a caption at the top of each vitrine, naming the expedition that brought these objects to Berlin between 1500 and 1993. Missing are the taxonomies and hierarchies that, in an old-school ethnological museum, would have imposed (a Western) order upon the disarray of artifacts. But what is intended as a critique of ethnographic authority ends up leaving the uninitiated visitor clueless as to what meanings the objects might possess. Without classification, all that is left is the clutter. 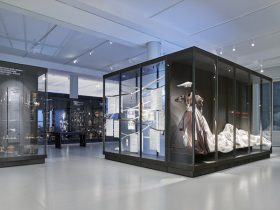 Exhibition view of the module “Open Storage Africa. Appropriating objects and imagining Africa” of the Ethnology Museum in the Humboldt Forum, with the exhibition Confronting Colonial Pasts, Envisioning Creative Futures about the cooperation project on collections from Namibia in the foreground, on the right a textile artwork by Namibian fashion designer Cynthia Schimming.

Displaying ethnographic objects is one of the great challenges of the museum world. Two exhibitionary forms tend to prevail: the typological, like jumbled together with like; or the sculptural, each object isolated as a free-standing work of art. Both are necessarily limited and distort the context in which artifacts were made and used. Neither pole of what James Clifford called “the art-culture system” succeeds alone in conveying a sense of the histories contained in objects. Yet, there is little attempt to get past these dated exhibitionary forms in Berlin’s revamped Ethnological Museum. In the gallery on Kamerun — the former German colonial possession that included today’s Cameroon — context is provided by a small number of panels of text. The only sources of liveliness are a few informational videos and a large installation by the artist Justine Gaga. 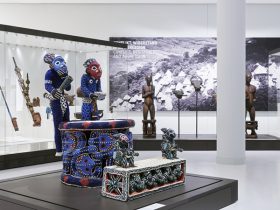 Throne “Mandu Yenu” with footrest (Cameroon, before 1885) in the module “Colonial Cameroon. Conquest and agency” of the Ethnology Museum in the Humboldt Forum. 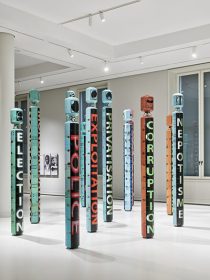 Installation “Indignation” by Justine Gaga in the module “Colonial Cameroon. Conquest and agency” of the Ethnology Museum in the Humboldt Forum

The strategy of using contemporary art to breathe life into ethnographic displays is a tricky one. Curators of ethnographic collections are not necessarily versed in artistic debates and often choose works based on instrumental criteria. It is not because an artist comes from the same country as an artifact produced there decades or centuries ago that a fruitful dialogue between past and present takes place. Sometimes it works, as in Greg Semu’s “Auto portrait with 12 disciples” (2010), included in the section of the museum dedicated to “Oceania: Rituals and Beliefs.” Other times the strategy just diverts attention from the more difficult question of how non-Western artifacts relate to the Western conception of art.

The fraught discussion surrounding art and ethnography is nowhere to be found in what has so far been made available of the Humboldt Forum’s permanent collections. Why is the Museum of Asian Art, upstairs from the Ethnological Museum, a museum of art while the other is not? The contrast between the two institutions is revealing. Whereas its downstairs neighbor is all jumble and darkness — with sleek showcases painted in matte black — the Museum of Asian Art is airiness and light. Its panels are colored in cream, gold, white. Its vitrines contain one or a few objects, not dozens. There is room for contemplation, rather than confrontation and prescription. Visitors are made to feel that they are in a cultivated setting, in which the purpose is to view extraordinary objects and appreciate them. 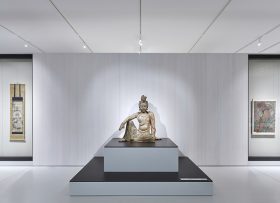 Bodhisattva Avalokiteshvara in water-moon-pose (China, Song Dynasty, 960 – 1279) in the module “Art and cult. Sacred art in China and Japan” of the Museum of Asian Art in the Humboldt Forum

On the day I went, the Ethnological Museum had many more visitors than the Museum of Asian Art. In these times of social media histrionics, learning about distant cultures seems to be a less tempting proposition than arguing about one’s own. And, yet, there is so much to be gained from the purposeful display of artifacts from afar, especially if their histories are duly contextualized. We can only hope that, when the remaining galleries are opened, the curatorial project will remember that bringing objects to life and giving voice to their makers is the most important political statement a museum can make.