You are here: Home » Articles filed under: 'News' » Article: 'Challenges for leadership as bushfires'

Challenges for leadership as bushfires 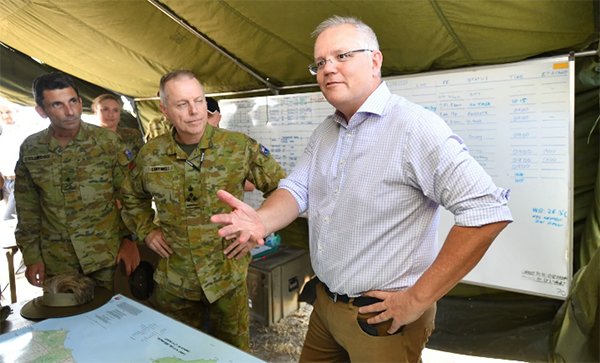 SWAN REACH, Australia — Scott Morrison famously held up a grapefruit-size lump of coal in Parliament and told the public there was nothing to fear.

“This is coal. This is coal. Don’t be afraid! Don’t be scared! Won’t hurt you. Won’t hurt you,” the future prime minister said in 2017, when he was a lawmaker. He accused his partisan adversaries as having “coalaphobia,” adding that “affordable energy is what Australian businesses need to remain competitive.”

But the wildfires raging now on his continent, supercharged by climate change linked to the burning of fossil fuels such as coal, have created a searing test of Morrison’s ability to lead his country through the crisis.

His reputation as a coal advocate has not helped as he has struggled to project empathy for victims of the fires, which have burned millions acres, killed an estimated two dozen people and hundreds of thousands of animals, and filled the usually clear Australian air with smoke.

The disaster has re-energized a long-running national debate over climate change and the country’s heavy investment in coal mining. Australia is one of the world’s biggest exporters of coal. Global activists have accused Morrison’s government of helping to scuttle progress on international climate talks late last year. Morrison skipped the climate meeting convened by the United Nations in September.

Protesters plan to take to the streets in a string of Australian cities Friday in demonstrations organized by Uni Students for Climate Justice. Morrison has mocked environmentalists as “apocalyptic” and has threatened to outlaw protests.

The prime minister has also been pilloried for taking a family vacation to Hawaii just before Christmas. His constituents saw pictures of him wearing shorts and a T-shirt on the beach, flashing a thumbs up and looking jolly. Australia was already deep into a devastating bush-fire season — one that would get even worse in the days ahead.

So would the optics for Morrison. A few days ago, as the prime minister toured one of the devastated fire zones, a video captured the awkward moment when a volunteer firefighter refused to shake his hand. Another clip showed citizens angrily heckling him. This week, murals mocking Morrison have popped up on streetscapes, including one in which he’s shown on fire, with a word balloon saying “This is fine.” 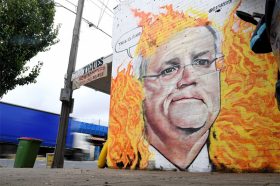 A mural depicting Morrison in Tottenham, outside Melbourne, on Tuesday. (James Ross/EPA-EFE/Shutterstock)

Morrison is fighting back on the image front. His right-of-center Liberal Party produced an advertisement highlighting Morrison’s efforts to fight the fires by calling out army reservists and sending in more equipment. But the upbeat, toe-tapping music and self-congratulatory message struck some Aussies as dismayingly tone-deaf.

“The prime minister is being revealed as a hollow spin doctor who is inept as a leader in a national emergency. He will never live this down,” said Robyn Eckers­ley, a political scientist at the University of Melbourne who has followed climate politics for three decades.

“What he lacked in this process was empathy. It wasn’t there,” said Barrie Cassidy, a veteran journalist. “He couldn’t find the right message.”

Southeastern Australia has been scorched by at least 200 fires, with close to 2,000 homes destroyed since the bush-fire season began in September. In recent days, some rain and lower temperatures have given firefighters a momentary break. But hotter, drier weather is expected this weekend, and no significant rainfall is in the forecast.

Morrison and his center-right coalition government have been the focus of widespread condemnation over accusations that they failed to heed warnings from experts that this would be a devastating bush-fire season. Greg Mullins, the former fire commissioner of New South Wales, was among 30 retired emergency officials who pleaded with the Morrison government for more aircraft and funding, but he told an Australian television show that Morrison would not meet with them.

Climate change makes extreme weather more likely and can intensify specific events. The area hit by the fires has been in a years-long drought. Prescribed burns, designed to lower the fuel load in the bush, have been reduced as the cool season when such fires are possible has shrunk, said Brian Myers, a forester and research scientist whose community near Cobargo was largely destroyed by the fires.

The driving force behind the planet’s warming is the spike in greenhouse gases caused by the burning of fossil fuels. So it can be a rough time to be a politician known as a champion of coal mining.

While public concern about climate change has fluctuated over the past two decades, a 2018 national poll found 59 percent of Australians agreed that “global warming is a serious and pressing problem” that should be tackled “even if this involves significant costs.”