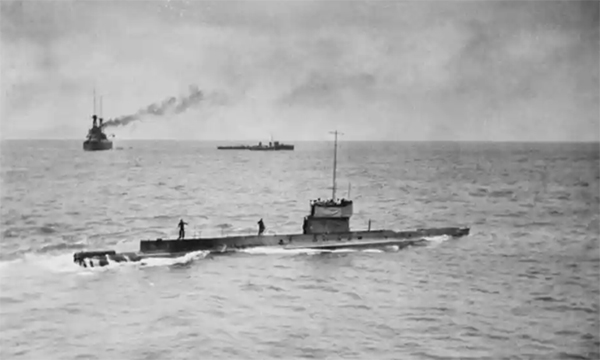 Some are worried that trophy hunters will target Australia’s first submarine, the AE1, which was found in 2017 after it disappeared in 1914.

There are concerns rising metal prices will lead to more illegal scavenging unless the government acts to protect wrecks.

Vera Ryan doesn’t know much about her uncle Jack. Petty officer Jack Messenger was one of 35 men who were on the HMAS AE1 submarine when it sank in the early days of the first world war.

But she knows the site of the wreck is an important place, a place of memories for her and the hundred-odd other descendants and families of the Australian and British sailors who died.

The location, off the coast of Papua New Guinea, is a secret. But it might not be secret enough to be protected from marauding metal thieves.

There are concerns that rising metal prices will prompt more illegal scavenging of Australia’s shipwrecks.

For years people have been pillaging wrecks, including those that sank with sailors on board, for metal. Some are worried that trophy hunters will target the AE1, which was found in 2017 after it disappeared in 1914.

There are people who are quite prepared to desecrate the wrecks, Rear Admiral Peter Briggs

Australia is struggling to protect wrecks, especially those in foreign territories.

“You can’t have a war grave that’s under water,” Ryan says. “But not having that respect for it is very upsetting.”

Ryan is the convenor of the AE1 descendant families’ association, which comprises about 100 people related to the 35 men who died when the AE1 went down.

Rear Admiral Peter Briggs, who led the search for AE1, says he is concerned the boat will be targeted by trophy hunters.

“The families hate the thought of that … to see that there are people who are quite prepared to desecrate the wrecks,” Ryan said.

So-called metal pirates are looking for high-value metals (such as bronze propellers or low background steel), souvenirs or just scrap metal. Metal prices are volatile but currently on the rise for a range of reasons. The British naval historian Phil Weir pointed out the connection on Twitter this week. When investigators discovered entire ships had vanished in 2016, it was described as a “perfect storm” of high metal prices and a lack of enforcement of existing rules.

Shipwreck expert Ian Macleod says high prices are likely to tempt more people to steal from war sites. People “will do anything for money”, the WA Museum fellow and authority on maritime corrosion and conservation says.

“Greed is what motivates people and it’s the job of government to control that greed within their capacity as being responsible for caring for Australian sites.”

Macleod points out that Australia has not ratified a Unesco treaty to preserve underwater cultural heritage.

“Why can’t you make that commitment? Why don’t you care?” he says.

A spokesperson for the environment minister, Sussan Ley, said the commonwealth was working on ratifying the Unesco convention and that Ley was “due to be briefed on this in the very near future”.

“[She] remains mindful of doing what we can to protect underwater cultural heritage,” they said.

Macleod says the AE1 is “out of sight, out of mind”, but that there are also wrecks closer to home at risk, such as HMAS Voyager.

His brother witnessed the devastating collision between Voyager and HMAS Melbourne off Jervis Bay in 1964, and developed post-traumatic stress disorder in the aftermath.

“That’s in Australian territorial waters and essentially there is nothing under the current legislation that protects it,” Macleod says.

Macleod says there are a range of ways Australia could better protect shipwrecks, including those outside its territory, with treaties or other coordinated programs.

“It’s the least we can do to give peace to the minds of the descendants and direct families of people lost,” he says.

The Underwater Cultural Heritage Act 2018 protects ships and aircraft that were sunk 75 or more years ago, and there are various state laws as well.

They said the department was consulting PNG about declaring a marine protected zone around the site of AE1.

The wreck of second world war cruiser HMAS Perth, which is in Indonesian waters, has already been heavily ransacked. Dr James Hunter, the curator of naval heritage and archaeology at the Australian National Maritime Museum, says that even with legislation, local support is needed to protect sites.

“You have to have someone on the ground,” he says. “You need someone at the provincial level, someone who’s right there, who can respond.

“And you have to have a good relationship with the foreign government you’re dealing with.”

But everything takes money. If that was unlimited, Hunter says, you could use satellites, or cameras attached to buoys, to monitor sites.

Ryan’s father was 20 years younger than Jack, the brother who died at sea. Her dad only met Jack a few times before he died, aged 27.

She says that for the families of AE1, it seems that the story of the submarine “just disappeared”, lost in the fog of war. But when searches for its final resting place kept going, she says, they all became part of a “submarine family”.

“They weren’t lost, they were waiting to be found,” she says.

Ryan says it’s not the bodies that are the important part about recognising and protecting the wreck.

“It’s important for [the families] to feel that there is a recognition of the place that holds the memory,” she said.