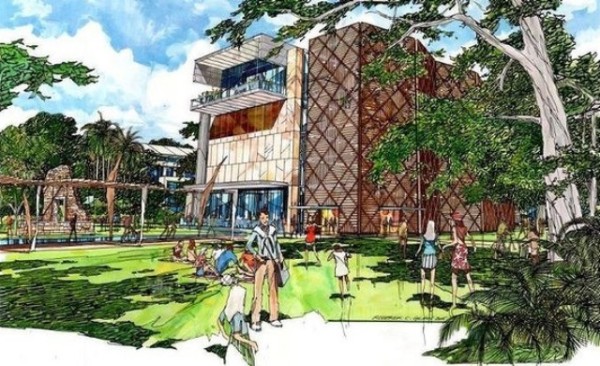 Concept drawing for the new Chan Building in central Darwin.

One of the most exciting architectural projects in the Northern Territory will be led by local firm DKJ projects.architects in partnership with the nationally acclaimed Fender Katsalidis Mirams Architects.

The re-purposing of Darwin’s Chan Building into a modern, dedicated visual art gallery was announced in the 2015 NT Budget earlier this year. And the $18.3 million project using a mix of private and public funds will transform the Chan with stunning proposed designs for the building.

“The Territory Government is extremely excited about the redevelopment of the Chan Building,” Chief Minister Adam Giles said. “I’m delighted leading designers DKJ projects.architects and Fender Katsalidis Mirams Architects have understood the vision for the project and produced some exceptional designs for it.This project will invigorate the CBD of Darwin and create a drawcard for locals and visitors alike.”

Arts and Museums Minister Gary Higgins said the project will deliver “a new cultural institution to further promote Northern Territory culture, especially our Indigenous art and culture, and to support cultural exchange with Asia. It will be a venue Territorians can be proud of and will expand the horizons of the Museum and Art Gallery of the Northern Territory substantially.”

MAGNT chair, Allan Myers AO QC – who’s determination to extend MAGNT into town from its suburban sea-side setting was instrumental in getting this project off the ground – said the project is an “..inspired initiative. The benefits for the people of the Northern Territory of having a great art museum in the civic centre of Darwin will be immense, both culturally and economically. The Museum and Art Gallery of the Northern Territory is proud to have the opportunity to display and interpret a far greater quantity of beautiful and significant art.”

It is not yet known whether all the art in MAGNT – including its significant collection of early Papunya boards and the annual Aboriginal & Torres Strait Islander Art Awards (the Telstras) – will move into the Chan, leaving only museum matters in the current building.