You are here: Home » Articles filed under: 'News' » Article: 'Change at NGA'

Gerard Vaughan will have to hit the ground running when he takes up his three-year term as National Gallery of Australia director in November.

The former National Gallery of Victoria director and University of Melbourne art historian will confront several immediate challenges when he begins work at the Canberra gallery on November 10.

Before Vaughan has even begun the role, NGA council chairman Allan Myers (with whom Vaughan worked at the NGV, where Myers was president) has identified three main challenges Vaughan will be expected to address: those include dealing with the after-effects of the stolen antiquities scandal, overseeing the second stage of the gallery’s expansion and dealing with a reduced budget for the gallery.

Vaughan makes no bones about the fact that the role presents some major challenges, but also huge opportunities.

“I’m really pleased about it,” he said in an interview with Fairfax Media after his appointment was officially announced by Federal Arts Minister Senator George Brandis on Thursday. “I feel very honoured to have been offered the position.

“From my perspective, having been director of the NGV for 13 years, the opportunity to make a significant contribution at is national level is a real challenge.

“In many ways, I think that a national institution has a more clearly focused and defined national role.”

That role includes what Vaughan calls “cultural diplomacy”, which reflects Australia’s place in the world, a focus on the art and artefacts of countries in the Asia-Pacific region and promoting our artists overseas.

Many of Vaughan’s ideas in this area were informed by the time he spent working at the British Museum, where he spent seven years as director of the institution’s Development Trust before returning to Australia in 1999 to run the NGV.

“I am a great believer in cultural diplomacy,” Vaughan said. “For many years I was at the British Museum, which was and is in every sense a museum for the material culture of the whole of mankind. It had that global view as to what it could and should be doing.

“For me it’s very much about being active both collecting the visual culture of our own region, whether that’s in the Pacific – Cambodia, Indonesia, Thailand – and the culture of East Asia – China and Japan.” 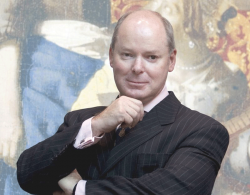 Gerard Vaughan, new Director, NGA. Source: ABC Blogs
Positions Vacant » View All
» Exhibition Experience Developer – Te Papa
» Operations & Science Centre Mgr – Otago Museum
Latest News » View All
MA Museums Change Lives Awards
2021 Shortlist announced Read more.
Tattooing as a cultural phenomenon & art
form – historic & current challenges Read more.
Oriel College’s retain & explain plaque for
Cecil Rhodes statue – what’s balance? Read more.
City of London to retain & explain statues
- Guildhall’s slave trader policy reversal Read more.
What to do if you find fossils or artefacts
A history worth protecting Read more.
Top +
Council of Australasian Museum Directors, c/o Ms Daryl Karp, Museum of Australian Democracy at Old Parliament House PO Box 3934 Manuka, Australian Capital Territory 2603 Australia, © CAMD 2021
Copyright: All information and resources provided on this website remain the copyright of the Council of Australasian Museum Directors. Permission is granted for viewing and downloading for personal and not for profit purposes. Those wishing to reproduce any materials for commercial, educational or other uses are requested to contact us.
Disclaimer: The content of this website is provided for information purposes only and is not intended as a substitute for professional advice. No claim is made as to the accuracy or authenticity of the content of the website. The Council of Australasian Museum Directors does not accept any liability to any person for the information or advice (or the use of such information or advice) which is provided on this website. The information on our website is provided on the basis that all persons accessing the site undertake responsibility for assessing the relevance and accuracy of its content. No responsibility is taken for any information or services which may appear on any linked web sites. Hostgator.
.