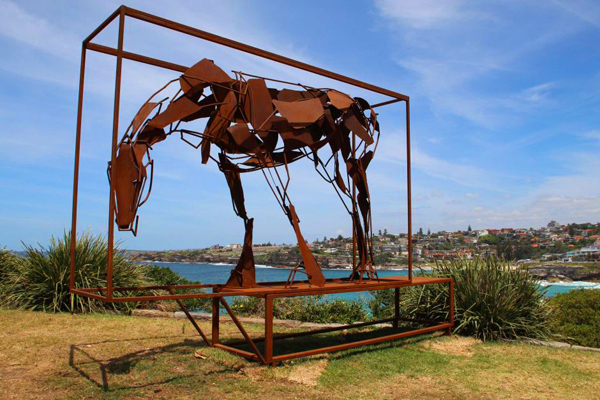 Sculpture by the Sea had better luck securing funding with Catalyst compared to the Australia Council. ABC News: Candice Marshall.

The head of the Australia Council wants to stop talking about controversies in arts funding, and return the focus to artists and their work.

Ten days ago the Federal Government announced it was abolishing Catalyst, the fund set up by then arts minister George Brandis in 2015, which allowed the government to have direct control over which artists and organisations were funded.

The establishment of Catalyst, originally known as the National Program for Excellence in the Arts, came as the Australia Council’s funding, delivered at arms’ length from government, was slashed by $100 million.

The council had remained tight lipped during the upheaval, but chief executive Tony Grybowski today said the latest move was a “significant endorsement” of its work.

Mr Grybowski said he hoped for a smooth transition as his agency took over $12 million of contracts that had been funded through Catalyst.

“Our interest is in ensuring that this wonderful creative sector, arts organisations, of all sizes, are supported to create great work,” he told RN’s Books and Arts.

“While the focus has been on arts funding over the last couple of years necessarily as we’ve gone through this significant change, I want to shift the conversation to being about the great work that individual artists do.”

He refused to describe Catalyst as a mistake, saying it was not his role to judge government policy.

But he said the lesson from the last few years was that arts funding bodies needed to have clear communications with grant recipients.

“Ultimately [we should be] making it as clear as possible so the artists, and the arts organisations, understand the opportunities that are available to them,” he said.

When he set up Catalyst, Senator Brandis said there was a widespread perception, “particularly outside Melbourne and Sydney”, that the Australia Council was a closed shop that excluded some artists.

That was the experience of Sculpture by the Sea’s founding director David Handley, who told Books and Arts that securing funding through Catalyst was fundamentally different.

“We found the ministry very open, very engaging. Quite frankly we’d been shunned by the Australia Council for 20 years,” he said.

“Unlike the Australia Council, where in most years we received no funding and on average about $9,000 or $10,000 per show, we received a quarter of a million dollars a year from Catalyst.”

Mr Handley suggested the popularity of his event on the beach in Sydney and Perth meant the Australia Council did not see it as fitting their agenda.

“People want that money where they want it to go, as opposed to viewing matters objectively … it’s only a certain type of sculpture that is favoured by the Australia Council,” he said.