You are here: Home » Articles filed under: 'News' » Article: 'Changing the Conversation' 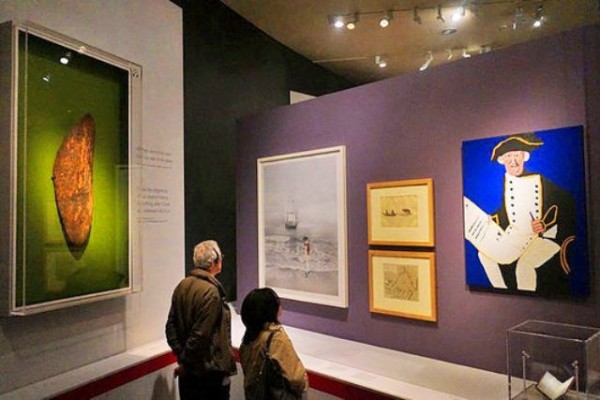 Maria Nugent, Forty millennia of Indigenous history at the British Museum, 8 May 2015

The British Museum’s Indigenous Australia exhibition could change the conversation about relations between Indigenous people, museums and collections, writes Maria Nugent in London

The wide press coverage of the opening of the British Museum’s Indigenous Australia: Enduring Civilisation exhibition was as much a result of Prince Charles’s quips about Prince Harry on “walkabout” in Australia as it was of the exhibition itself. The formal reception, held in the museum’s Great Court, was a memorable event – and not just because one museum trustee, Grayson Perry, attended as his alter ego Claire in full Victoriana garb, or because Kathy Lette was swanning about in a dress styled on the Aboriginal flag, or even because Prince Charles asked me if I had managed to submit the chapter I had written for the exhibition book on time. (I had, nearly.) It was memorable also because it felt momentous – as ceremonial occasions for landmark events often do.

And there is little doubt that the exhibition is a landmark event. This is the first time the British Museum has staged a major exhibition devoted to Indigenous Australia, a fact that Neil MacGregor, the institution’s soon-to-be former director, acknowledged more than once. He also observed what an anomalous and unacceptable state of affairs this was, given that Indigenous Australians are considered the “oldest continuing civilisation” in the world and the British Museum is an institution dedicated to telling the stories of the world’s great civilisations. Promises have been made to remedy the situation, with a permanent display of Aboriginal and Torres Strait Islander culture and history one possibility. It is late coming, but it is a start.

Indigenous Australia has been skilfully curated by Gaye Sculthorpe, a Palawa woman whose ancestors were from northeast Tasmania, who is responsible for the Oceania part of the museum’s Department of Africa, Oceania and the Americas. Earlier in her curatorial career, she led the development of the Bunjilaka Gallery at Museum Victoria before spending a decade or so with the National Native Title Tribunal. She was enticed to the British Museum in 2013 by another Australian, Lissant Bolton, who heads up the Department of Africa, Oceania and the Americas (or what is sometimes dubbed “the rest of the world”); by the time she arrived, the decision to mount an Indigenous Australia exhibition had already been made.

Since around 2007, the National Museum of Australia, or NMA, and the British Museum have been slowly developing a partnership that included staff exchanges and collection research. Some foundational research was undertaken by Ian Coates from the NMA, and that work, which had an emphasis on the collectors and the conditions under which objects were collected, has been bolstered by Sculthorpe and others since. This partnership eventually led to a successful Australian Research Council grant application for a project called “Engaging Objects: Indigenous Communities, Museum Collections and the Representation of Indigenous Histories,” led by anthropologist Howard Morphy, involving the British Museum, the NMA and the Australian National University. Along with anthropologist John Carty, also from ANU, I have been involved in the project since it commenced in late 2011.

The future dimly glimpsed in 2007 has arrived. On taking up the position at the British Museum, Sculthorpe was immediately faced with the considerable task of pulling together an exhibition in a reasonably short time with limited labour and resources. Indigenous Australia: Enduring Civilisation is largely due to her energy, unfailing efforts, and ability to bring people together. Early in the process, she developed a strong vision for the exhibition, which she envisaged would present an account of Indigenous Australia spanning 40,000 years and incorporate a component dealing with the almost 250 years since Captain Cook.

Her commitment didn’t falter, even though it was not common for British Museum exhibitions to deal with such “recent” history and even when early audience research indicated that some museum-goers didn’t want to be reminded of the terrible deeds done in Britain’s name. At the same time, Indigenous Australians were adamant that the truth should be told about violence on the frontier. The exhibition would not only need to be clear-eyed about the violence of that encounter and the dispossession and destruction it caused, but also attentive to Indigenous people’s agency, resilience and creativity. It is this doubled perspective that is captured in the exhibition’s subtitle, “enduring civilisation,” which signals the remarkable persistence of Indigenous Australian civilisation even as Indigenous Australians endured the imposition of European civilisation.