You are here: Home » Articles filed under: 'News' » Article: 'Chasing the Night Parrot' 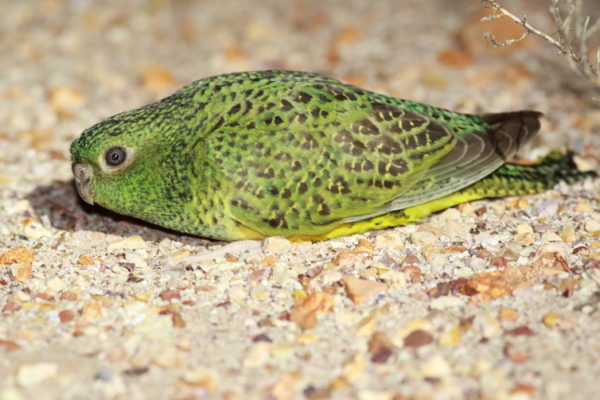 Dr Steve Murphy, Cracked it! A 30-year cold case involving an egg and the mysterious Night Parrot, The Conversation, 20 October 2016

Sometimes nature leaves little clues that can be difficult to interpret, so getting things right isn’t always easy.

Consider the case of an egg that was found in northern Australia’s remote Tanami Desert. It was spotted abandoned on the ground among spinifex in the early 1980s.

After being studied by ornithologists, the view was that it may well be an egg of the spinifex-nesting Night Parrot, described by the Smithsonian as one of the world’s most mysterious birds. The chances of finding such a rarity are astronomically small.

The bird’s scientific name is Pezoporus occidentalis and it is known in that part of the Northern Territory as Yurrupudpudpa by the local indigenous group, the Eastern Warlpiri.

But was this really the egg of a Night Parrot? There are no confirmed Night Parrot eggs among the extensive collections of the world, so nobody was really sure.

Nevertheless, the possibility drifted loosely into the literature that it was the only known egg of the Night Parrot.

The Night Parrot – as the name suggests – is a truly nocturnal parrot, and the only other one is the Kakapo of New Zealand.

This bird of the Australian outback is also extraordinarily elusive, known from fewer than 30 specimens scattered through the world’s museums, despite its range stretching all the way from the Pilbara to northwestern Victoria.

In 2013, the parrot was “rediscovered” after its almost complete disappearance in the early 20th century and despite considerable efforts to prove it was still around.

Naturalist John Young found a tiny population alive and seemingly well, if not in great numbers, in remote western Queensland.

Since then, research has yielded plenty of information about what the birds need for their conservation and management.

So what then of the fate of the Tanami egg find?

For 30 years the egg sat unstudied, first in the South Australian Museum and then in the Museum and Art Gallery of the Northern Territory, under accession code T2614.