With 2,000 square metres of exhibition space spread across four levels, the museum triples the space previously available for the University’s collections, which began with the opening of the Nicholson Museum in 1860. The new museum draws on the Nicholson, Macleay and University Art collections. The Nicholson Collection is the largest collection of antiquities in the southern hemisphere. The Macleay Collections include some of Australia’s most significant natural history objects. The University Art Collection comprises more than 8,000 historical and contemporary works spanning millennia.

“Our collections contain a remarkably diverse range of material from around the world,” said museum director David Ellis.

“Some of the objects on display are well-known favourites while others are on show for the first time in decades.”

Remains from the museum’s four mummies, which have drawn families to the Nicholson Museum for decades, will finally reside together in a dedicated Mummy Room. The custom-made space will also reveal details of the museum’s Mummy Project, which used the most modern scientific techniques to find out more about the remains of these ancieTnt Egyptians and the lives they might have led.

Elsewhere, four Australian shark specimens that have been part of the Macleay natural history collection for more than a century will go on show for the first time since the 1930s.

Mr Ellis says the museum gives curators opportunities to present the collections in new ways. The link between Cubism and mathematics, the rise of photographic studios and our relationship with the ocean are among the themes explored across 18 exhibitions opening with the museum. 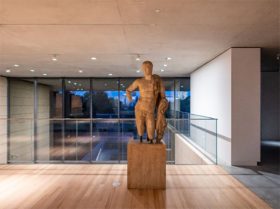 Indigenous perspectives also play a major role in the museum. The largest exhibition space, the Ian Potter Gallery for temporary exhibitions, will showcase the University’s extensive holdings of art from the Yolŋu communities of eastern Arnhem land. Indigenous ‘Ambassadors’, jointly curated displays dotted throughout the museum, were created by communities from across Australia to tell their own unique stories.

The new museum also makes it easier to bring objects from different collections together, said Mr Ellis. The Object/Art/Specimen exhibition explores these new possibilities, placing a mounted thylacine in front of modernist artwork, and displaying a Canaanite Bronze Age bowl alongside a West Papuan bag.

“It’s essential for a university museum to explore the myriad ways we look at objects,” he said. “A Russell Drysdale oil painting isn’t just about Australian art history. It also gives science and agriculture students an opportunity to consider the use of land, and how perceptions of land have changed.

“That is the essence of the Chau Chak Wing Museum, to provoke, to challenge, but also to delight.”

The museum’s construction was made possible by the generosity of benefactors, including a $15 million donation by Dr Chau Chak Wing in 2015.

“I am delighted to have donated as the initial donor to kick-start the museum,” Dr Chau said. “I anticipate that this place of educational enlightenment will both preserve the past and embrace the future for all generations.”