A new publication from our Museum team in partnership with the University of Western Australia.

The ties between Egypt and Australia are brought into a new light in our latest publication co-authored by Candace Richards, Richard Vokes, Yvonne Inall, Victoria Lowry and Jewel Oreskovich.

Divided into thematic sections, this report explores the entanglement of Egypt and Australia from the colonial establishment of Australian museums and support for British and European led excavations of ancient Egyptian sites through to the personal experiences of ANZACS, migrants and tourists in Egypt. 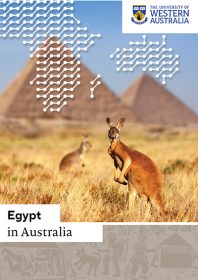 The authors offer a survey of the Egyptian cultural heritage known in Australia’s collecting institutions and examine who collected, what they collected and why. Although the report features many of the significant and well-known ancient artefacts known in Australia, also included are the social history collections, historic photographs, and artworks that were made in Egypt which highlight the varied nature of collecting practices and different ways in which Australians have engaged with Egyptian culture across the 19th and 20th centuries.

Throughout the report are mini-biographies of some of the key scholars and collectors who have influenced the dispersal of Egyptian cultural heritage across the nation. This includes key figures of Sydney University’s history from Sir Charles Nicholson to alumni Grafton Elliot Smith and Dr John Basil St Vincent Welch. This work builds upon the themes developed in the Chau Chak Wing Museum’s exhibition Pharaonic Obsessions: Ancient Egypt an Australian Story.

Significantly one section is dedicated to the ancestral remains of Egyptian people who currently reside in Australian museums. Each individual is, where known, identified by name and records how and when they were brought to Australia. The authors hope that this section contributes to a greater understanding of the scope of the dispersal of Egyptian people, including individual body parts, across the nation.

The final section focuses on the history of exhibitions of Egyptian cultural heritage in Australia. Beginning with the 19th-century displays of the University of Sydney and the ‘Mummy Room’ of the Melbourne Exhibition Hall, the chapter then surveys the rise of the blockbuster exhibition and recent travelling exhibitions of ancient cultural heritage. Of note, the authors also touch on some of the Australian exhibitions and artists that have been staged in Egypt including the 1977 Second Black and African World Arts and Culture Festival which included 63 contemporary Indigenous Australian artworks and toured through Cairo and Alexandria in Egypt.

Egypt in Australia is the second report of the ‘Africa in Australia’ research and exhibition project led by Richard Vokes, University of Western Australia. ‘Africa in Australia’ seeks to bring to the fore new stories about the history of Africa-Australia connections and their impact on Australia’s past and present, through the medium of museum collections. The aims of the project are to develop an Australia-based, and globally connected, infrastructure for digitising, researching, and exhibiting African heritage, and to forge new links between collections and communities in Africa and Australia.

Egypt in Australia is now available for download as a digital publication. Supplied as open access under the Creative Commons licence – Attribution-NonCommercial-NoDerivatives 4.0 International (CC BY-NC-ND 4.0)

The authors would like to thank our peer reviewers who offered constructive feedback in the editing and support for publication and the numerous institutions who contributed images and content in the making of the report.