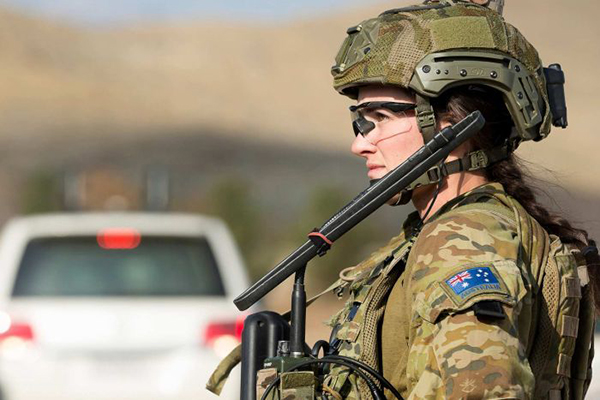 Controversial Chinese-born billionaire Chau Chak Wing is being hailed as a “proud and generous Australian” for donating more than $2 million to charities that help veterans.

Australia’s political parties have now stopped accepting money from Mr Chau but have not committed to returning money already donated.

Last year, speaking in the Parliament, federal Liberal MP Andrew Hastie, the chairman of the powerful intelligence committee, accused the businessman of being involved in a UN bribery scandal. It’s an allegation he strenuously denies.

Earlier this year, Dr Chau won a defamation case against Fairfax over an article that also linked him to the bribery scandal, an allegation he has strenuously denied. 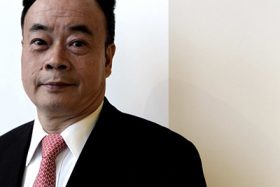 Chau Chak Wing has given more than $2 million to Australian veterans’ charities. Fairfax.

He was awarded $280,000 in damages, which was donated to veterans’ charities.

Nine, which now owns the former Fairfax metropolitan newspapers, and the ABC are currently embroiled in a second defamation case brought by Dr Chau. He has claimed the news outlets falsely portrayed him as a Chinese spy.

Charity Soldier On has benefited from an overwhelming share of Dr Chau’s generosity, with $1,560,000 already donated or pledged to the organisation.

The Australian War Memorial has also picked up a substantial sum of $620,000 in the last six years. 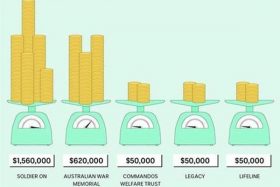 Dr Chau’s large donations to the Australian War Memorial have seen him named an honorary fellow of the institution, a title reserved for only 10 Australians. 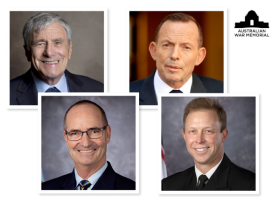 Former Australian Army chief and Soldier On chairman Peter Leahy praised Mr Chau’s substantial donation to the group, describing him as a “committed, proud and generous Australian” while accepting a cheque in November.

“We have no concerns about Dr Chau Chak Wing. He’s been generous with a broad cross-section of the Australian community and I think people who question his motives need to think again,” Mr Leahy told the ABC.

“Without a donation like this the work would be difficult and I’m quite sure this money will help save the lives of Australian soldiers.”

Earlier this month, Mr Leahy accompanied Mr Chau to China on a trip during which the prominent businessman was later personally greeted by China’s President Xi Jinping.

The Australian citizen is a self-made billionaire who amassed his fortune through real estate and lives between Vaucluse in Sydney and Guangzhou, north of Hong Kong.

Chau speaks little English and has knocked back almost all requests from journalists to interview him. 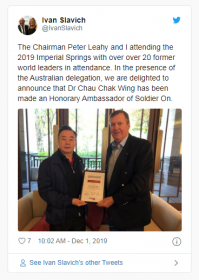 In a statement, a spokesperson for Dr Chau said he had “been personally touched by the stories of the families of our returned service men and woman and the struggles they face”.

“Like all Australians, Dr Chau is alarmed by the number of veterans taking their own lives and the fact that charities, such as Soldier On, [have] at times been forced to turn away veterans seeking psychological support due to lack of funding.”

The billionaire is also one of Australia’s most generous political donors, gifting about $4 million to the major political parties.

He is also believed to have donated up to $45 million to two Sydney universities and had a building named after him, colloquially known as the “crumpled brown paper bag”.