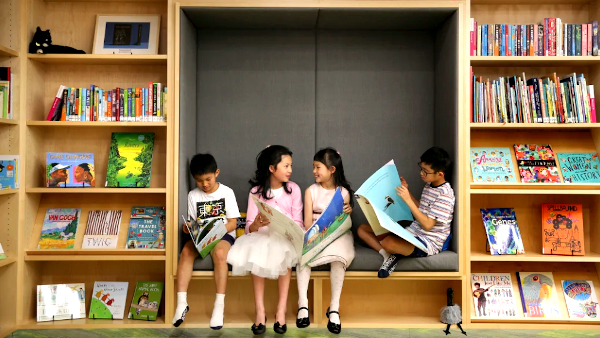 The State Library of NSW’s new children’s space will house up to 20,000 books, but strictly no screens. Credit: James Alcock.

“Children are the final frontier,” he said. “And children are some of the most voracious readers. It’s really quite paradoxical they’ve been left out for so long.”

The Children’s Library, which will be unveiled during an open day on October 12, will house up to 20,000 books, but strictly no screens, in shelves that form a maze and line the walls.

“What we are trying to do with this library is remind children of the value of physical books,” Dr Vallance said. “So we don’t have screens, we don’t have iPads.”

Fake books hang from the ceiling, with titles such as Fun with Spreadsheets by Philip Barter (the library’s chief financial officer) and Prometheus Loses It by Dr Vallance. The library is also developing an automated way to provide reading recommendations for children based on a series of questions that assess their interests and reading ability.

Philippa Stevens, the State Library’s manager of information and access, said the new children’s space will offer one of the few quiet, free spaces in the city.

“When you come in to the city as a family, especially on the weekend, there aren’t many quiet places,” she said.

The opening of the Children’s Library follows a $15 million renovation of the historic Mitchell Building, with new and refurbished galleries as well as the John B Fairfax Learning Centre.

Dr Vallance said the launch of a space dedicated to children’s literature was a continuation of efforts to open up the library’s collection of art, manuscripts and rare books to the public.

“What we’re trying to do is make the library a little bit more friendly,” he said. “Traditionally, it’s been a place you only use if you know what you want before you come to visit.”

The State Library of Victoria received a $2 million donation earlier this year from billionaire couple John and Pauline Gandel to build a new children’s space and literacy programs.

But Dr Vallance said the Children’s Library, funded with $500,000 in donations from 442 members of the public, would be Australia’s pre-eminent collection of literature for children used by writers and researchers as well as kids.

“Adults have very, very low expectations of what children can comprehend,” he said. “Some of the most sophisticated writing in Australia at the moment is writing for children.”

Libraries have experienced a renaissance in recent years, with the number of visitors to the state’s public libraries has increased by 6 million over the past 20 years to 35 million in 2017-18.

Local councils across NSW have also embarked on a library building spree, with dozens of new and refurbished libraries opening or under construction.

Dr Vallance said it was assumed in the past libraries would not survive the rise of the internet.

“What people failed to realise is that libraries are fundamentally social places,” he said. “They are places where you meet people, you have conversations, where you’re not communicating electronically, but face-to-face.”

The Children’s Library will be launched as part of an Open Day at the State Library of NSW on October 12.