You are here: Home » Articles filed under: 'News' » Article: 'Christmas – but where have all the'

Christmas – but where have all the 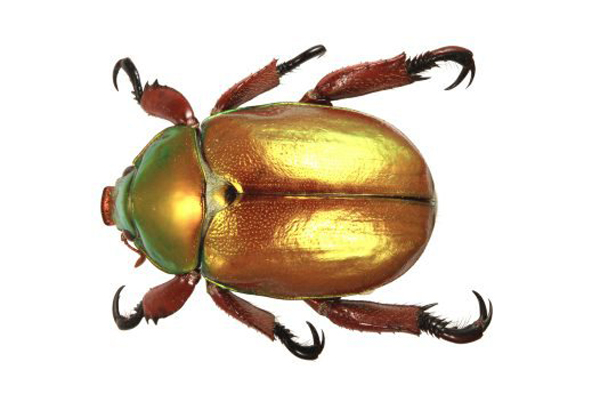 Where have all the Christmas beetles gone?, Australian Museum, 11 November 2o18

The evidence suggesting a decline is anecdotal yet compelling.

It’s that time of year when retailers bemoan the fickle habits of consumers, people clean out their barbeques and Christmas beetles crash into windows and pile up around streetlights . . . or do they? Entomologist Chris Reid investigates.

Christmas beetles are a type of scarab (a group that includes dung beetles and chafers). Compared to other scarabs, Christmas beetles (genus Anoplognathus) are large and chunky, somewhat flattened in shape and with metallic brown, yellow or pink colours. They most obviously make themselves known in midsummer by swarming around lights in towns throughout eastern Australia.

The adults generally feed on eucalyptus leaves. They prefer open woodland to forest and thrive in pastures wherever trees have been left in place. In farmland they can form dense masses on the remaining eucalypts, chomping through leaves, sometimes killing their hosts. In contrast to the adults, the larvae (grubs) feed on roots, usually of grasses. Some species are economically important pests of eucalytpus plantations while others are implicated in dieback – the decline of mature trees in landscapes like those in NSW’s New England Tableland.

There are 36 species in the genus with all but one unique (endemic) to Australia and 21 species found in New South Wales. At least 10 species occur in the Sydney region – more if the Blue Mountains are included. Because they are such a feature of the eastern Australian experience some common species have been given English names, such as the Washerwoman, Anoplognathus porosus, and (rarer) King Beetle, Anoplognathus viridiaeneus (see photos, right). Distinguishing some species can be tricky, but it helps to examine the hairs on their ‘bums’ (posterior). (This is something of an in-joke among entomologists but it actually works for this group!)

The evidence suggesting a decline is anecdotal yet compelling. In the 1920s, they were reported to drown in huge numbers in Sydney Harbour, with tree branches bending into the water under the sheer weight of the massed beetles. You won’t see that these days, and I’ve never seen a Christmas beetle come to light where I work, next to Hyde Park. While public concerns suggest that numbers are also much smaller in the suburbs, I’ve found at least five species near my home, clustered around street lights at the southern edge of Royal National Park, 55 kilometres south of Sydney.

If we accept that Christmas beetles have declined in central Sydney, the next question is ‘why?’. The dual life history provides a clue. The adults need eucalypt leaves, and the larvae need the roots of grasses, presumably native grasses. An important habitat for them, the Cumberland Plain woodland, was once widespread in Western Sydney, but less than 10% remains.

Sydney is now bulging at the seams with 4.5 million people, and Western Sydney has absorbed much of the growth. The beetles’ former habitat is now a brick, concrete and tarmac jungle. Christmas just isn’t what it used to be, is it?

For a fully illustrated key to the Christmas beetles of New South Wales, go to keys.australianmuseum.net.au.