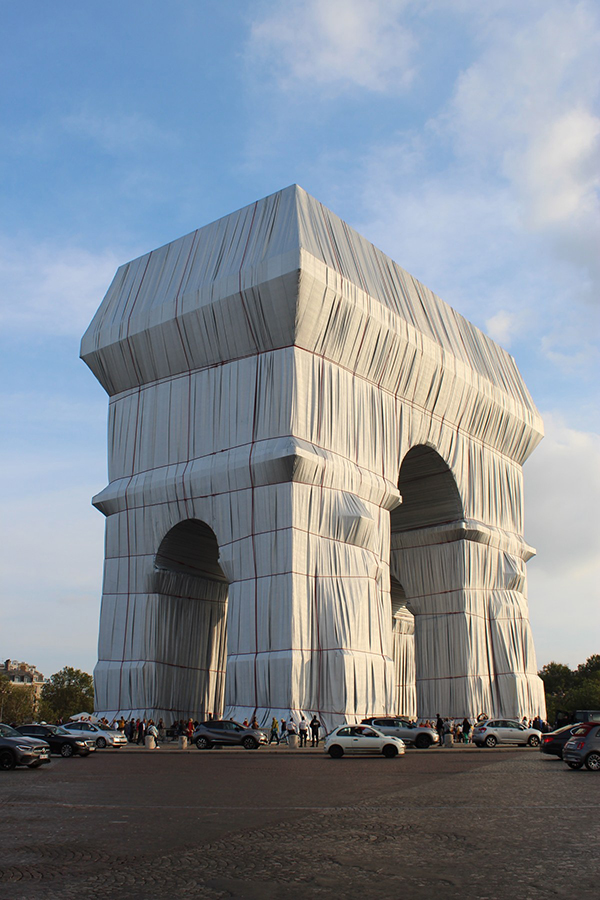 Christo and Jeanne-Claude, “The Arc de Triomphe, Wrapped” (2021) (all photos by the author for Hyperallergic).

PARIS — Christo and Jeanne-Claude’s final public work, “L’Arc de Triomphe Empaqueté” or “The Arc de Triomphe, Wrapped,” finally opened in Paris earlier this month. Following lengthy delays caused by the COVID-19 pandemic and Christo’s untimely death in May 2020, the installation will be on view for a mere 16 days, through Sunday, October 3. Originally intended to coincide with the Centre Pompidou exhibition held in summer of 2020, “The Arc de Triomphe, Wrapped” instead exists as a standalone coda and silent memorial to the artist couple’s prolific career.

The idea to wrap the monument came to Christo in 1961 when he was an art student living in a small apartment not far from the Place de l’Étoile and was revived in 2017 with the planning of the Pompidou retrospective. Now, 60 years later, the posthumous realization was spearheaded by the couple’s nephew, Vladimir Yavachev, with support from the Christo & Jeanne-Claude Foundation and the Centre des Monuments Nationaux. 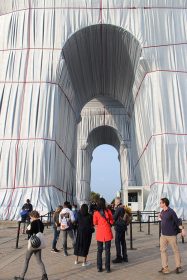 While the final result might look effortless, its planning was far from it. Preparations required many months to navigate numerous bureaucratic hurdles, overcome technical challenges — such as the design of temporary scaffolding that would both protect the monument’s sculptural reliefs and not disrupt its nesting falcons — as well as select a date within the narrow window between Bastille Day celebrations in July and World War I commemorations in November, since the Arc de Triomphe is also home to the Tomb of Unknown Soldier and Europe’s first modern-day eternal flame. Additionally, the sheer scale of the project necessitated heroic efforts, comprising 269,000 square feet of silvery-blue polypropylene fabric, 32,300 square feet of red rope, and the combined efforts of 1,200 workers. (As with other temporary works by the duo, all materials used in the project are recyclable.) 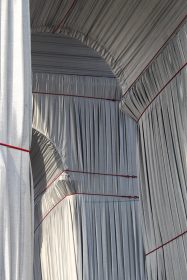 In contrast to Christo and Jeanne-Claude’s earlier installations in Paris (the “The Iron Curtain” in 1962 and wrapping of the Pont Neuf in 1985), public response to the “Arc de Triomphe, Wrapped” has been overwhelming positive, and perhaps grimly supports the adage that artists are only appreciated after death. French news outlets, however, have focused attention on a single aspect: the work’s price tag — and who will bear its cost. With a stated budget of 14 million Euros, such a question is no small matter; yet as with all of Christo and Jeanne-Claude’s public-facing installations, the project was entirely self-financed through the sale of original works including collages, models, and lithographs.

Prior to her death in 2009, Jeanne-Claude vehemently argued that such a funding mechanism was the only method to maintain complete artistic freedom. In turn, “Arc de Triomphe, Wrapped” is free and open to all, with viewers able to visit and interact with the installation on ground level at any hour of the day — though the standard 16 Euro ticket remains in place for the viewing platform. (Neither have enterprising visitors been stopped from profiting from the artwork, with listings for swatches of the wrapping’s fabric appearing on leboncoin, the French equivalent of Craigslist, for upwards of 50 Euros.) Still, it is this aspect of interaction that the Christo & Jeanne-Claude Foundation stresses most, describing the work as a sensual invitation, from the alluring appeal of the fabric’s reflective shine to touching — or even hanging from — the rope’s sturdy heft. 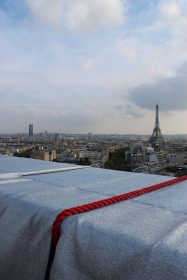 Outside of France, positive reception has hailed the event as a sign of Paris’s resurgence post-lockdown and after the monument was last featured in the news for its defacement by Gilets jaunes protestors in December 2018. More critical accounts have questioned that very symbolism, asking what it means to conceal or shroud a monument espousing national glory predicated upon autocracy and colonial conquest. Such readings are likely encouraged by the current moment, in which France has been forced to contemplate its real-versus-perceived power on the world stage in an uncomfortable act of self-reflection spurred by the American-Australian submarine deal. 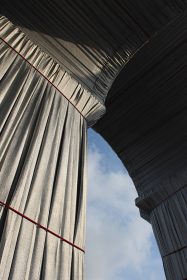 But the mood on-site is joyful. Each weekend, the Place de l’Etoile is pedestrianized so that onlookers can have a safer and unobstructed viewing experience, free from the notoriously chaotic traffic surrounding the monument. Trained guides dialogue with perplexed onlookers and the billowing fabric serves as a hide-and-seek course for children and popular selfie background for adults. Part funeral and part rebirth, the “Arc de Triomphe, Wrapped” demonstrates that now more than ever, public art and engagement are cause for celebration.

“Arc de Triomphe, Wrapped” continues at Place de l’Étoile, Paris through October 3. For those who cannot view the work in person, a continuous live feed is available on YouTube and the Christo & Jeanne-Claude Foundation website.