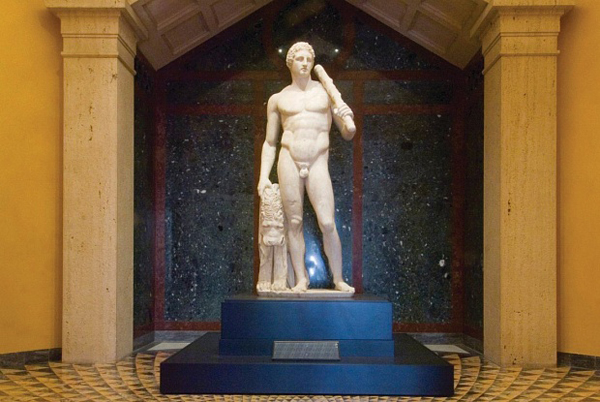 Chronological displays opening in 2018 at the Getty Villa will supersede themed galleries.

When the Getty Villa reopened in 2006 after a nine-year, $275m renovation and expansion led by the disgraced antiquities expert Marion True, curators made the bold decision to abandon the formerly chronological installation in favour of a thematic approach. Greek, Roman and Etruscan antiquities were presented in galleries devoted, for example, to gods and goddesses, and stories from the Trojan War.

That is all due to change next spring, when an ongoing overhaul of the Villa is complete. The project, which began in January, will add 3,000 sq. ft of gallery space, new display cases and LED lighting, and a fresh coat of paint, but focuses primarily on reintroducing a clear chronology. The budget is undisclosed.

The Australian director of the J. Paul Getty Museum, Timothy Potts, proposed the rehang when he was first recruited to lead the Los Angeles institution in 2012. Themed galleries are “fine as a social history of art”, says Potts, who is a specialist in ancient art. But chronology, he says, is “the only way you can understand the direction of stylistic change”.

The Getty’s return to chronology is part of a wider trend in US museums. The National Gallery of Art in Washington, DC, reopened its East Building last September with a clear historical narrative of Modern art. In New York, the Museum of Modern Art recently closed a year-long presentation of works from the 1960s, installed by year across nine galleries.

“There was a time when [a thematic] approach was a novel way to do things,” Potts says. “But there is a logic to how things evolve in technological and iconographic terms.”

At the Villa, curators first reviewed the museum’s holdings to determine if any major works were not on show. Among the rarely seen objects coming out of storage are Roman frescos from the first century AD that were unearthed in Boscoreale, near Naples, in the early 20th century.

The 3,000 sq. ft of additional displays will support the curators’ key mission: to make objects more visible. The space will be converted from programming areas, including a reading room and a cloakroom.
Although the number of antiquities on view will remain stable at around 1,200, the result will be a “more intellectually coherent” presentation with a clear sense of stylistic development over time, according to Jeffrey Spier, the Getty’s senior curator of antiquities.

To put the mostly Graeco-Roman collection into a global context, a dedicated gallery will also house ancient objects from non-European cultures on long-term loan from other museums. The first such installation, in partnership with the Ny Carlsberg Glyptotek in Copenhagen, will focus on Palmyra in Syria.

Meanwhile, the Getty Center is preparing an exhibition on ancient Egypt, Rome and Greece, scheduled to open next March, that heralds a series of shows exploring how ancient civilisations learned from one another.

But the most important goal of the project is to allow masterpieces to shine. “There are museums where subject matter is the primary question, but we’re an art museum,” Potts says. “For me, that is really the focus.”

Timothy Potts says: “This is one of our great masterpieces, and one of the earliest of a fertility goddess. It’s about a foot high and we think it came from Cyprus, but we can’t be sure. It’s in a similar style to eastern

Mediterranean work from Turkey, the Levant or Cyprus. It illustrates the phenomenon that the oldest work can be the most Modern-looking. The head could be straight out of a Picasso from the 1940s.”