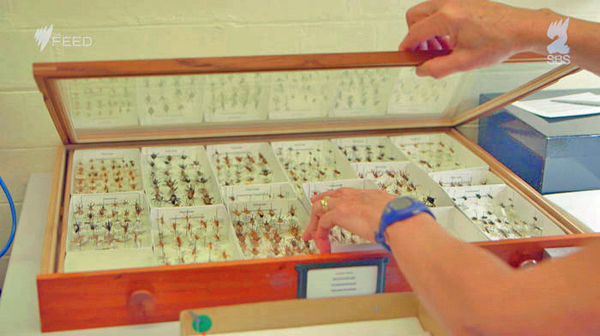 Natural history museums are such a natural fit for playing a leading role in the rapidly developing citizen science movement. source: The Feed, SBS.

Citizen science manager at the Australian Museum Paul Flemons talks about how important everyday people have been to their scientific discoveries.

The advent of the internet, social media and mobile devices has seen the democratisation of many professions previously the domain of only those with suitable training and credentials. Science has been no exception, witnessed by the rise of the citizen scientist and the practice of citizen science.

Yet the involvement of the enthusiastic and highly motivated individual in science, particularly through natural history museums, is not a new phenomenon. The Australian Museum (AM) has been engaging volunteers in science for decades, yet the term citizen science has only received broad recognition in recent years, a response to the growing numbers of people looking for ways to contribute meaningfully to things they care about.

In the 1960s, AM Entomologist Courtenay Smithers was working with citizens to understand the distribution of butterflies on hilltops around Sydney. In the 1990s the Birds in Backyards program was started by the AM’s bird researcher Richard Major, who continues to be active and innovative in the citizen science space with projects that engage the citizen scientist, such as Hollows for Homes and Cockatoo Wingtags which are both highly engaging programs rooted solidly in answering meaningful research questions.

In 2011 the AM and the Atlas of Living Australia (ALA) joined forces to create DigiVol, the world’s first citizen science website for scientific data capture as part of virtual expeditions into the collections of museums across the globe. DigiVol has been a pioneer in this area, currently being used by more than 25 institutions internationally and inspiring similar initiatives around the world, most notably the Smithsonian’s Transcription Centre. DigiVol has hosted more than 700 citizen science projects, capturing almost 400,000 specimen records and field note pages from more than 20 countries around the world.

Positions Vacant » View All
» Te Ao Māori roles – Canterbury Museum
» Producer, Public Art Program – Queensland Museum
Latest News » View All
Te Papa funding preserving & digitising
Spencer Digby–Ronald Woolf photo archive Read more.
MAAS Powerhouse Parramatta contract let
LendLease building 6-stars to open 2024 Read more.
New Gold Mtn filmed @ SHM to show on SBS
Chinese miners’ voice from Vic Goldfields Read more.
AMaGA 2022 Natl Conf WAM Boola Bardip
Call for abstracts open to 30 Sept 2021 Read more.
UK Govt yo-yos on arts education funding
"a lack of joined-up thinking from the govt" Read more.
Top +
Council of Australasian Museum Directors, c/o Ms Daryl Karp, Museum of Australian Democracy at Old Parliament House PO Box 3934 Manuka, Australian Capital Territory 2603 Australia, © CAMD 2021
Copyright: All information and resources provided on this website remain the copyright of the Council of Australasian Museum Directors. Permission is granted for viewing and downloading for personal and not for profit purposes. Those wishing to reproduce any materials for commercial, educational or other uses are requested to contact us.
Disclaimer: The content of this website is provided for information purposes only and is not intended as a substitute for professional advice. No claim is made as to the accuracy or authenticity of the content of the website. The Council of Australasian Museum Directors does not accept any liability to any person for the information or advice (or the use of such information or advice) which is provided on this website. The information on our website is provided on the basis that all persons accessing the site undertake responsibility for assessing the relevance and accuracy of its content. No responsibility is taken for any information or services which may appear on any linked web sites. Hostgator.
.