You are here: Home » Articles filed under: 'News' » Article: 'City of Ballarat votes to wind up MADE'

City of Ballarat votes to wind up MADE 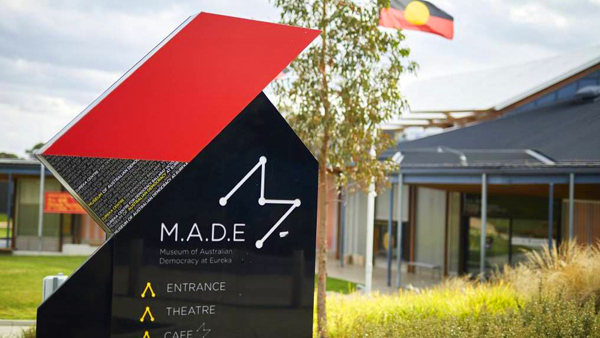 Ashleigh McMillan, City of Ballarat votes to wind up MADE and rename it Eureka Centre, The Courier, 22 February 2018

Ballarat City Council have finally made a decision on the future of the financially beleaguered Museum of Australian Democracy at Eureka (MADE).

It’s the pivotal nail in the coffin for one of Ballarat’s most loved and loathed cultural institutions as it currently functions; operations at MADE will now be led by City of Ballarat and funding will be rolled back.

MADE will be ‘rebranded’ and called the Eureka Centre. The current governance board will be disbanded with the company wound up, following a 2.30am vote at an ordinary council meeting last night.

The alternative motion successfully proposed by Ballarat mayor Samantha McIntosh states the operation of the facility will now fall under the direct management of the City of Ballarat’s development and planning directorate.

The decision follows the completion of a feasibility study into the museum which council was subsidising by $1 million per year. Annual visitation had reached around 60,000 people, with only half of those paying visitors, well below the forecasted 125,320 paying customers projected in MADE’s 2011 business plan.

Cr McIntosh said there had been some “really emotional and important presentations” during the early hours meeting. The discussion around the MADE decision took more than an hour, including public presentations.

“It’s really clear to me and to councillors that the Eureka story is significant to Ballarat and our future,” she said.

After months of deliberations, Cr McIntosh said there needed to be “heart and soul” in the decision to retain the flag and tell to the story to students and the community.

MADE CEO Rebecca MacFarling also addressed the council chamber, saying that as a business the museum had consistently operated within budget, with governance from a board of committed and skilled professionals.

Seconding the motion, former MADE board member Cr Daniel Moloney said the ambitious MADE feasibility study had put museum staff and governance on a difficult path for the last year.

“The most disappointing element is that it disbands the board,” he said. “It gives it a future – to give it a closer link to council and the City of Ballarat’s resources to call on – but perhaps diminishes the incredible work that the board has done.”

“This is a wonderful institution, it has suffered from its branding, and we have the opportunity to rectify that.”

As the commercial operations cease, the site will be developed for community use, in the form of library and research services, as well as supporting a profitable onsite cafe.

City of Ballarat have also agreed to develop and action a fundraising plan, which will include advocacy for State and Federal funding and private investment.

A skills-based Eureka Centre Consultative Committee is to be appointed, and City of Ballarat will now investigate re-installation of iconic flag sale.