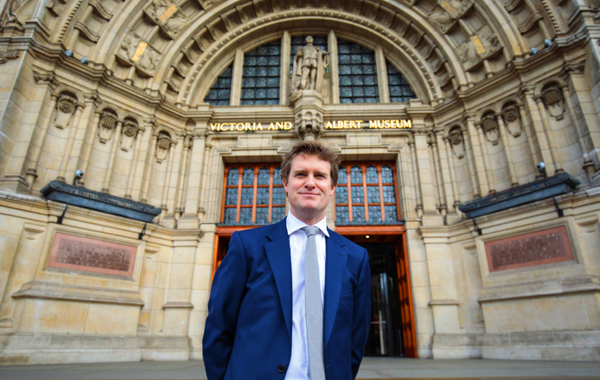 Tristram Hunt, the director of the V&A in London. (Photo by Jack Taylor/Getty Images).

Tim Schneider, The Gray Market: Why Museums Like the Victoria & Albert Might Want to Take Political Sides (and Other Insights), ArtNet, 4 June 2018

Our columnist on the Victoria & Albert controversy, plus surprising turns in provenance research and the market for Felix Gonzalez-Torres.

Every Monday morning, artnet News brings you The Gray Market. The column decodes important stories from the previous week—and offers unparalleled insight into the inner workings of the art industry in the process.

This week, stories about the eternal conflict between stasis and change….

On Monday, Tristram Hunt, the director of London’s Victoria & Albert Museum, penned an op-ed in The Art Newspaper defending the decision to exhibit pieces of a historic housing project outside the V&A’s pavilion at the 2018 Venice Architecture Biennale.

The museum owns “a three-story façade and interior flat fittings” from Robin Hood Gardens, a low-income housing complex and New Brutalist “masterwork” designed by Alison and Peter Smithson in 1970. Critics on the left now charge that the V&A’s choice to acquire and display these pieces in a prestigious institutional setting tacitly endorses the gentrification wave now crashing onto the building’s former east London neighborhood.

Zooming out further, Hunt argues that the fire and fury directed at the V&A owes to “the increasingly popular conviction that not only can museums not be neutral sites, but that they also have a duty to be vehicles for social justice.” He goes on to advocate for his conception of “the role of the museum not as a political force, but as a civic exchange: curating shared space for unsafe ideas.”

He also charges that this function is “more important than ever” in “an era of absolutist, righteous identity politics”—one that he contends is being fought by “keyboard warriors and ‘art-wash’ agitators” frantically flitting between more pots to stir than a workaholic witches’ coven.

Broadly speaking, I agree with Hunt about the ideal role of the museum. I worry—a lot—about polarization and the loss of nuance in all aspects of contemporary culture. It’s the single factor that scares me most about our ability to find sustainable solutions to hard problems on a whole range of critical issues, even more so outside the arts than inside.

At the same time, most museums are struggling financially, thanks in no small part to dwindling government funding, and attendance is not tracking with the growth and increasing diversity of the general population. At some point, it’s inevitable that some leaders somewhere will ask themselves whether taking political action could position them better with the sensibilities of the audiences they need to court to stay relevant (and solvent) in the future.

As a reminder, museums as we generally think of them today are neither all that old nor all that fixed in their identity. The V&A has existed for fewer than 250 years, yet it’s still one of the model’s eldest. “Curator” wasn’t a profession until the 20th century, meaning museum collections have only been curated for a few decades more than cocktails or salad. And even some of the most prestigious arts institutions in the world are just now radically reshaping fundamental traits like their admission policy and programming strategy.

Is it implausible that museum leadership could follow the same logic as the major brands—like Gucci, Delta Airlines, and Adidas—that have recently pivoted into deliberate stances on what would previously have been viewed as third-rail social and political issues, partly because some data shows that, at least in the US, the majority of the population now wants their brands to have an opinion?

Personally, I don’t think so. I’m confident that Hunt is still very comfortably in the majority among his peers on this issue at present. But if current funding and demographic trends continue, I also know this: Survival instincts have compelled people to do far wilder things than abandon neutrality before. And with contemporary life driving political polarization to new levels worldwide, the appeal of “shared spaces” ain’t what it used to be.

Last Friday, The Economist examined the unorthodox, enlightened approach taken by Germany’s Zeppelin Museum—which, FYI, collects neither blimps nor memorabilia from historically debauched ‘70s rock gods—toward the provenance of the artworks on view in its current exhibition. Despite the institution’s relatively small stature, its leaders have set a new standard for transparency in the murky waters of (potentially) misbegotten art.

“The Obligation of Ownership: An Art Collection Under Scrutiny” includes dozens of the nearly 4,000 pieces in the museum’s permanent collection. Yet what sets this show apart is that the works’ origins—and the lingering questions around them—are as much on display as the works themselves.

The curators have installed each painting, work on paper, and sculpture to showcase the identifying marks added by past owners, broadcasting their behind-the-scenes historical record for all to see. Wall text and supporting materials expand on important findings.

Even more compelling, “The exhibition’s transparent, systematic research is made clear to even the casual observer with a ‘looting danger’ classification system of green, yellow, orange, and red stickers on the artwork’s card.”

If you’re keeping score, “around half the labels are green, and almost as many are yellow. Only two have been assigned the more precarious orange, and none are labelled red.”

At the same time, museum officials emphasize that they are still digging into the past, meaning new information could disrupt some of the current classifications at any moment. Which is all the more reason this effort strikes me as so commendable.

While it’s not a stall tactic in every instance, requesting more time for research is one of mankind’s most time-honored methods for staving off embarrassing results. At some point, the research can easily transform from a fact-finding quest into a smoke-bomb plume allowing you to retreat from responsibility unscathed. As long as you’re still probing, no one can definitively say you screwed up, let alone compel you to face the consequences.

To their credit, the Zeppelin Museum is offering the best of both worlds. They seem to be taking further provenance research seriously, while literally shining floodlights on what they’ve learned about the collection right now. They’re showing their work in both senses of the phrase, and letting the public judge whether the knowledge gaps on display threaten the legitimacy of the collection.

It’s a refreshingly mature, nuanced way to handle a complex issue. Hopefully the art industry can learn from it on a conceptual level as much as one specific to restitution, because we could desperately use it on everything from art market reports to pricing to appraisals.