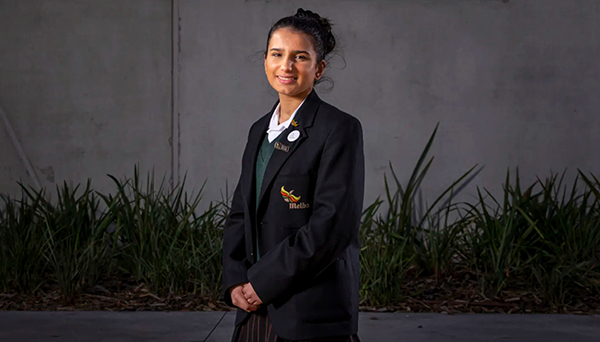 Year 12 student Elin Murray is calling for an overhaul of civics and citizenship education in schools. Credit: Daniel Pockett.

Henrietta Cook, ‘I don’t know who to vote for’: students trigger civics revamp, The Age, 18 July 2019

The teaching of civics and citizenship is set to be overhauled in Victoria, following a campaign by students who are concerned young people are disengaged from politics.

The state’s peak student body, the Victorian Student Representative Council, has called for youth-run “Politics 101” workshops to be rolled out to secondary schools, professional development sessions for teachers, and resource packs that detail how to vote and why it’s important.

Education Minister James Merlino has responded to their calls, instructing the Victorian Curriculum and Assessment Authority to work with students to improve civics and citizenship education.

“If we want to get the best out of our students, we need to listen to them,” he said.

“I think it’s important we look very closely at the civic and citizenship issue and that is why today I have asked the VCAA to begin working with VICSRC about what changes we could make.”

Melba College Year 12 student Elin Murray, who put forward the proposal at the council’s recent congress, said too many young people were disengaged from politics and this was fuelling informal voting.

Ahead of the May federal election, the 18-year-old’s Facebook feed was filled with posts from friends who had no idea who to vote for.

“People were posting: ‘I don’t know who to vote for, who should I vote for?’, or ‘I’m just going to pay the fine and don’t care’,” she said.

She said while she’d learnt how parliament worked, she hadn’t been taught the basics of how to vote, how votes were counted and the platforms of different political parties.

Her concerns are backed by national  research, which shows schools are not adequately preparing students to participate in democracy.

Every three years, a sample of about 10,000 Australian students are tested on their knowledge of the Australian government, judicial system and democratic processes.

The latest assessment found 55 per cent of year 6 students reached or exceeded the standard, but this dropped to just 38 per cent for year 10 students.

According to Monash University senior politics lecturer Zareh Ghazarian, this is the lowest results for year 10 students since testing began in 2004.

“Many young people are really passionate about all sorts of social issues going on in the world but when it comes to participating in the democratic process, they feel they are not well prepared or confident,” he said.

“That lack of confidence can lead to young people feeling unsure about their rights and responsibilities.”

He doesn’t blame teachers for the situation, but said a crowded curriculum and a nervousness about appearing biased meant civics and citizenship education was often not prioritised.

Civics and citizenship is enshrined in the Australian curriculum, with Year 7 students expected to explain features of Australia’s constitution and identify ways they can become active, informed citizens. By the end of year 9, students should be able to identify and analyse what influences people’s political choices and explain the key principles of Australia’s judicial system.

Rumaan Baryalai, a Year 11 student at Minaret College, said it was important young people understood who was running their country.

“What is going to happen to our country if this generation does not know the simple things, like the people who run their country?” he asked.

Braybrook College Year 11 student John-Paul Tran, who is an executive member of the council, said he’d be eligible to vote next year and was concerned about gaps in his knowledge.

“The more we learn about our political system the more engaged we are and the more informed decisions we will make about the future,” he said.

David Zyngier, an adjunct associate professor at Southern Cross University, said the civics and citizenship content in the curriculum was “dull and boring”.

“It is all about teaching democracy rather than teaching for democracy,” he said.

“Even though it talks about active citizens, students never get to act.”

He said students should be taught how to get involved in democratic action, which could involve lobbying the local council for lights at a basketball court.

“They might put in a submission to local council, attend the meeting, then they learn through doing that people can have an impact.”