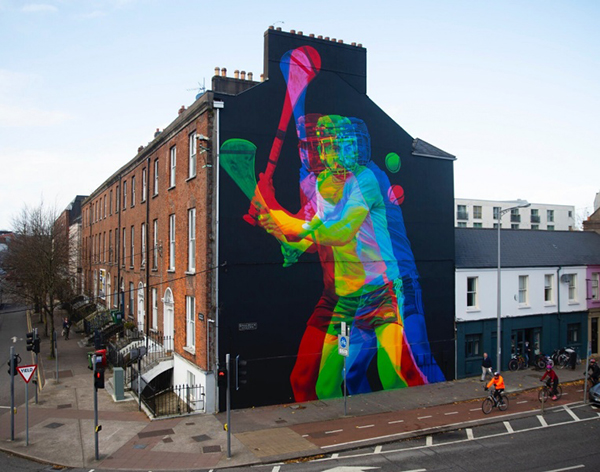 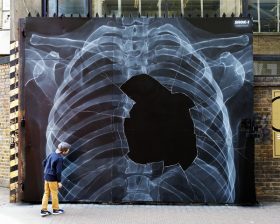 More than 60 urban artists are at work in 35 spaces across five floors of the almost-empty Museum building including rooms never seen before by the public.

Canterbury locals will recognise ROA’s work from the iconic moa mural he painted on the side of the Museum in December 2013 for the exhibition RISE: Street Art. ROA is one of a number of RISE artists returning for SHIFT. 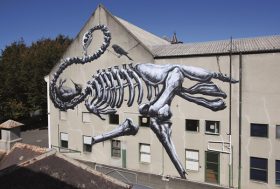 Moa mural on the side of the Museum building painted by ROA in 2013.

The overseas artists will be in good company working alongside top talent from Aotearoa New Zealand representing a range of urban art approaches. Other names from around the motu include Benjamin Work, Flox and Sweats, Charles and Janine Williams, Ross Liew, Haser, Tawck, Chimp, Milarky, Berst, Component and Margarita Vovna. 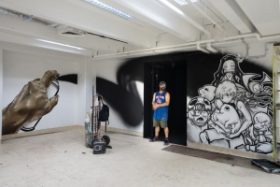 Christchurch has one of New Zealand’s most vibrant urban art scenes and will be well represented in the exhibition by artists which include Wongi ‘Freak’ Wilson, Ikarus, Jacob Yikes, Dcypher, Kophie, Jessie Rawcliffe, Ghostcat and Dr Suits.

Exhibition curator and urban art expert Dr Reuben Woods says the SHIFT project is proving to be a dynamic undertaking with the list of contributing artists still growing.

“One of the fantastic things about getting a big group of artists like this together is that there are heaps of opportunities for sharing ideas and cross-pollinating.”

Woods says the exhibition will showcase the huge variety of work grouped under the label “urban art”. Works will include murals, sculpture, video, tattoo art, installations and more.

“RISE, the 2014 street art exhibition at the Museum, was all about urban art’s emergence. These artists will showcase how urban art has evolved since then.

“We’re asking the artists to respond to the Museum as a space, so in curating the exhibition we’ve tried to include artists whose practices contrast or connect with the work of museums.”

Museum Director Anthony Wright says it’s been fantastic to see the exhibition so well received by the urban art community.

“All the artists we’ve talked to have been really keen to be involved. This project and the Museum setting are really sparking their imaginations. I think visitors will be really staggered when they see SHIFT for the first time. I’ve been blown away by the creativity and stunning works that are appearing all around the building and the artists are only just getting started!”

SHIFT: Urban Art Takeover opens on 28 January and runs until 11 April, after which the Museum will close for 5 years for a major building redevelopment. Tickets are on sale now. All proceeds will go towards the Museum’s redevelopment.