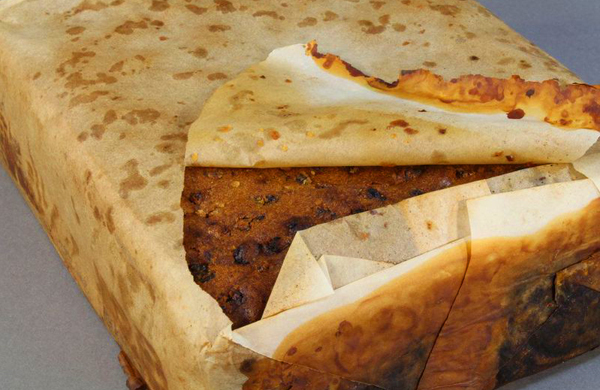 Even generations of penguins refused to touch the concoction believed to have been brought south by the Terra Nova Expedition.

Conservationists working to preserve artifacts in the first buildings ever constructed in Antarctica have found something extraordinary: a perfectly preserved, 106-year-old fruitcake. No, the cake is not a sign that Santa Claus hails from the South Pole, rather it is likely a leftover from Robert Falcon Scott’s ill-fated 1910 to 1913 Terra Nova expedition, where the explorer sought to be the first to reach the geographic South Pole, reports Christine Dell’Amore at National Geographic.

According to a press release from the Antarctic Heritage Trust, the cake was one of approximately 1,500 artifacts taken from buildings that were first constructed at Cape Adare, Antarctica, in 1899. The cake was found a tin from the bakers Huntley & Palmers. While the tin was corroded, the cake itself was intact and still wrapped in wax paper. “There was a very, very slight rancid butter smell to it, but other than that, the cake looked and smelled edible! There is no doubt the extreme cold in Antarctica has assisted its preservation,” says Lizzie Meeks, the Trust’s program manager for artifacts.

Yonette Joseph at The New York Times reports that researchers believe the cake belonged to the Terra Nova team because Huntley & Palmers was the bakery Scott commissioned to supply biscuits and cakes for his expeditions.

Dell’Amore reports that it’s likely the cake was left at the cabin by Scott’s Northern Party. Scott, with a team five men, eventually made it to the South Pole, only to find they were 34 days behind an expedition led by Norwegian polar explorer Roald Amundsen. Scott and his team all perished on their return journey.

The expedition’s Northern Party did scientific investigations in the area around Cape Adare before moving to another location for a six-week mission. But heavy ice kept their ship from picking them up, and the six men had to spend an entire winter with few provisions and little shelter. They dug ice caves for shelter, hunted penguins and seals and rationed their meager tinned food. After months of illness and near starvation, the men were able to complete a six-week journey to the expedition’s main camp.

So why would Scott load up on fruitcake—generally reviled these days—in the first place? “Fruitcake was a popular item in English society at the time, and it remains popular today,” Meek tells Dell’Amore. “Living and working in Antarctica tends to lead to a craving for high-fat, high-sugar food, and fruitcake fits the bill nicely, not to mention going very well with a cup of tea.”

But this particular fruitcake will not be served at tea time. According to the press release, conservators at the Canterbury Museum lab in Christchurch, New Zealand, have removed rust from the cake tin, deacidified the label, repaired the torn wrapper and added chemicals to stabilize its preservation. The cake, along with all the artifacts from the Cape Adare huts, will be returned to Antarctica and put back exactly where they were found when the man-made structures’ own conservation efforts finish up.

The fruit cake is not the only surprise conservators have found in the huts. Earlier this year, the Trust announced it had found a very detailed watercolor painting of a Tree Creeper, which was created by Scott’s chief scientist Edward Wilson, who later froze to death along with Scott and the rest of the team just 11 miles away from a depot with food and water.

The Terra Nova cake is not the world’s oldest preserved fruit cake. While there is no official organization keeping track of such things, for more than a century, a family in Tecumseh, Michigan, has preserved a cake made by family matriarch Fidelia Ford who prepared the cake in 1878 and died before she had a chance to slice into the fruity loaf.