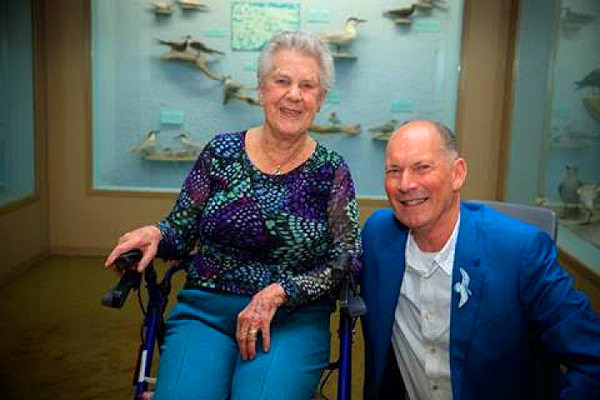 Sally Burrage, Emeritus Curator of Canterbury Museum’s History returned to Christchurch this week to celebrate her 100th birthday with family and Museum staff.

Selina Emily Aldridge (Sally) was born on 6 September 1917 in Sydenham, Christchurch during the First World War.

This was the same year the first female city councillor was elected in Christchurch and just two years after the first electric lights were switched on in the city. It was also the same year the Memorial to Robert Falcon Scott and the Polar Party was originally unveiled – the statue will be unveiled again today on its original site, having been removed and repaired following its fall in the February 2011 earthquake.

Sally has lived through some of the defining events of the last century: the 1918 flu epidemic, the 1929 Murchison earthquake, the Second World War and the more recent Canterbury earthquakes, after which she moved to Wellington.

In the late 1950s, Sally joined Canterbury Museum Archaeology Society. As part of this group, she took part in surveying and digs for nearly 50 years. By 1974, Sally had assumed leadership of the Museum’s Junior Club, which introduced many young Cantabrians to the research and collecting activities of the Museum.

She later worked with a wide range of our collections – ethnology, antiquities and archaeology in particular. Her work on describing the Museum’s various cataloguing systems through the ages and compiling a timeline of the history of the Museum culminated in her appointment as our first Emeritus Curator of Canterbury Museum History in 2001.

Sally was awarded the QSM for Public Service in 1988, a Christchurch City Council Community Services Award in 1998 and a Canterbury Volunteer Recognition Award in 2010

Museum Director, Anthony Wright says Sally is truly remarkable. “While she retired from the Museum in February 2011, she still helps us with queries and support. Sally is full of energy and has as enquiring a mind as ever. In fact, she looks and acts so youthfully that several times she had to produce her passport to convince people she was indeed 100!”