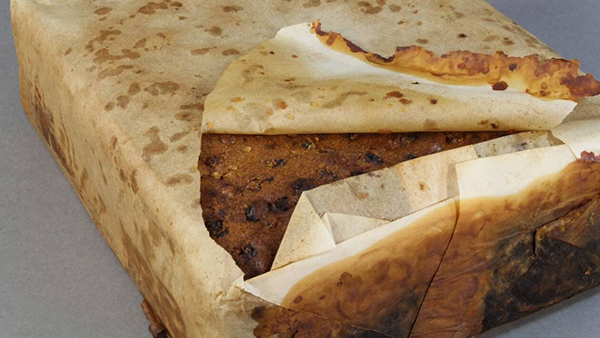 Relics from the earliest hut established on Antarctica are being conserved by Canterbury Museum staff and overseas experts. This century-old fruitcake was found in almost pristine condition.

If you’re facing a meal of grim leftovers, a squirt of sauce and dash of seasoning can go a long way.

Maybe that’s why Antarctic Heritage Trust staff found more than 30 bottles of Worcestershire sauce abandoned in huts by the first people to spend winter on the frozen continent, with the oldest relics dating back over a century.

Among the 1200 objects collected and conserved by a team of international experts were bottles of chutney, chocolate-covered lime juice nodules, pea soup, marmalade, kippers and a preserved meat called pemmican, with many still looking “fresh” in their original tin packaging.

Breaking the Ice, an exhibition at Canterbury Museum opening on 18 May, covers the British Antarctic Expedition and the first people to spend a winter on the ice in 1899.

The objects date to Carsten Borchgrevink’s Southern Cross expedition and members of Captain Robert Falcon Scott’s group. The explorers erected the first buildings, took the first steps on the Ross Ice Shelf, were the first to use dogs and recorded the first full year of climate data.

Borchgrevink and his party inhabited the area now famous for its harsh weather and the world’s largest Adelie Penguin colony from 1899, paving the way for the expeditions of Roald Amundsen, Ernest Shackleton and others.

Despite packing numerous condiments, explorers often complained their diet was boring. In his account of the expedition, Borchgrevink wrote that seal beef and roasted penguin flesh had become a “frequent repast as we grew frightfully tired of tinned food”.

A “perfectly preserved” 107-year-old fruitcake believed to have been taken down by Robert Falcon Scott’s northern party in 1911 would also be on display at the public’s only chance to see the items, including scientific equipment, clothing and sledging supplies. Under the government permit required to remove the items from Antarctica, they must be returned to the huts following their temporary removal for conservation.

Antarctic Heritage Trust executive Director Nigel Watson said the huts were the only example left of humanity’s first dwelling on any continent so sharing their stories gave “a glimpse into what these men endured in the first year on the Antarctic continent.”

Museum Director Anthony Wright said Canterbury Museum has almost 7000 objects from the heroic age of Antarctic exploration and discovery. Breaking the Ice will run until 13 October.