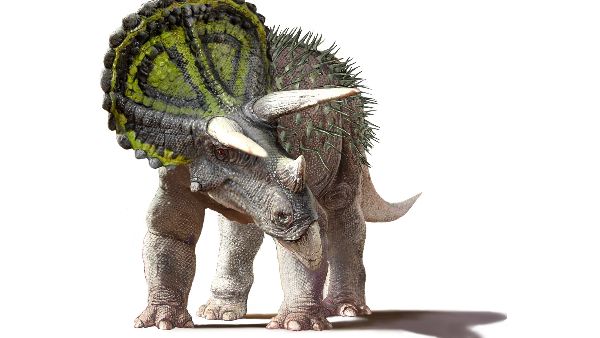 Cantabrians can discover the dinosaurs’ secrets of survival in a new exhibition at their Museum.

Developed in Australia by Gondwana Studios, Dinosaur rEvolution: Secrets of Survival showcases recent discoveries that have revolutionised the way we picture dinosaurs.

Now, new fossils found in China’s Liaoning Province, including skin, soft tissue, spikes and feathers, have shown that some dinosaurs were more like their modern descendants, birds, than we realised.

Dinosaur rEvolution tells the story of two branches of the dinosaur family, the Ornithischia and the Saurischia.

The Ornithischia had beaks, quills, scales, spikes, horns and massive body armour, while the Saurischia – the branch that includes the massive Tyrannosaurus rex – had feathers paired with scales, claws and sharp teeth.

Both branches adapted in different ways to their changing environment, but only one survived to fly away into the future.

Visitors can become dinosaur experts, learning about how different types of dinosaurs fed, fought and reproduced.

Canterbury Museum Senior Curator Human History Dr Paul Scofield says the exhibition is one of the biggest the Museum has hosted in recent years.

“It has been a huge hit in other parts of New Zealand and we’re sure it’ll go down just as well with Cantabrians.”

International touring exhibitions like Dinosaur rEvolution are expensive to stage in the Museum. The Museum is charging for entry to help cover the costs.

See also: Dinosaurs roar back to life at Canterbury Museum