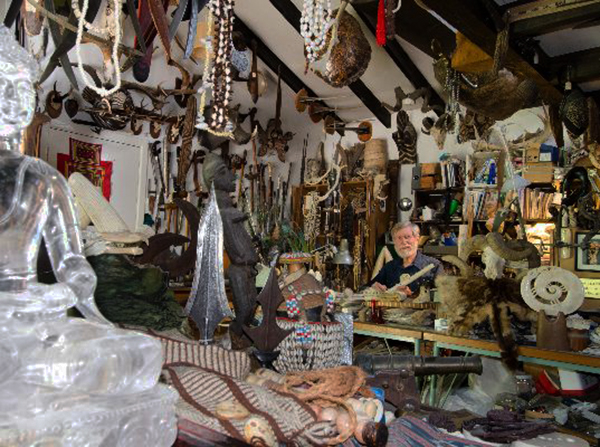 Owen Mapp in his studio. Photo by Hanne Eriksen Mapp.

An exhibition of works by the most eminent living artist carver of bone in Aotearoa New Zealand opens at Canterbury Museum on Friday.

Mapp has played a key role in the revival of bone carving in New Zealand. When he began to carve in the late 1960s, bone was considered a less desirable material for artist carvers.

Mapp’s unwavering dedication to the art form has played a vital part in its revival and the desirability of finely-carved bone today. His works are highly sought-after.

In 2019, Mapp was made a Companion of the New Zealand Order of Merit for his services to carving and bone art.

Mapp has sculpted a great variety of materials including whalebone, horn, pounamu and mammoth ivory.

The assembled works demonstrate the influence of Scandinavian and European carved objects on Mapp’s practice as well as that of his richest source of inspiration, Māori taonga and culture.

Mapp says his interest in Māori art stems in part from an early association with Canterbury Museum.

As a teenager, he worked in the Museum’s storerooms alongside archaeologists who took him to digs at some of the earliest sites of human settlement in the South Island.

“My work at the Museum was the first time I’d handled carved bone and jade, and it obviously made quite an impression on me,” Mapp says. “I’m quite chuffed that it’s all coming home, in a way.”

“Owen is one of New Zealand’s foremost artists and his works are exquisitely crafted. Dragons and Taniwha is on until November and I’d urge Cantabrians to come and see it while they have the chance,” he says.

Owen Mapp: Dragons and Taniwha – 50 Years an Artist Carver opens 11 September at Canterbury Museum and will close on 22 November 2020.