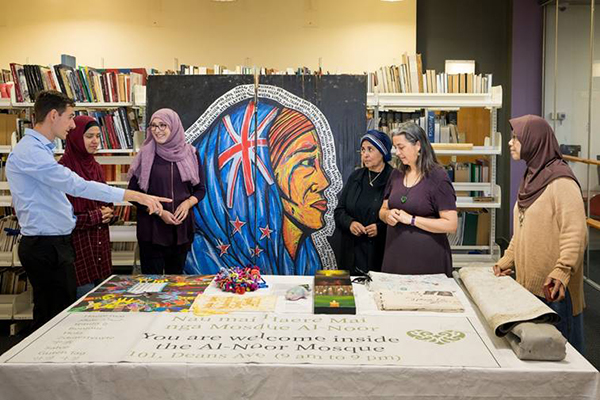 About 100 tributes out of the thousands laid throughout Christchurch after the mosque attacks will be cared for at Canterbury Museum.

Museum staff have worked with representatives of Christchurch’s Muslim community to select the tributes. They have now been formally registered as part of the museum collection.

Said Jumayah Jones, a survivor of the attack at Al Noor mosque and one of the representatives who helped select tributes for the museum: “When I see all the work that went into these tributes I feel loved and supported.

“I feel like the wider community has our backs. I feel the aroha.”

She said the museum is the best place to house the tributes as the Muslim community will be able to access them in the future.

“The months after the attacks were very busy for our community and many of us did not have as much time as we would have liked to engage with the tributes.

“Having them in the museum means members of our community can see them whenever they are ready to.”

Said museum curator special projects, Daniel Stirland, who worked with the community representatives: “It was a real challenge to choose from the thousands of tributes.

“The final selection represents the diversity of the tributes in terms of media and source, but also the emotions that they evoke and the stories behind them where they were known.”

“Those not selected for the collection were offered to the victims’ families to choose from, if they wished. The remaining toys were donated to the Salvation Army and condolence books will be archived by the Christchurch City Council.”

Said museum director Anthony Wright: “We think it’s important to preserve these objects and the stories behind them so our Muslim community and the wider Canterbury community can access them in future.

“Hopefully this will ensure that when we remember this awful act of hatred, we also remember the outpouring of love, compassion and solidarity that followed it.”

Some of the smaller tributes are on display at the museum alongside UNITY, an artwork by Simone Johnstone (aka The Flower Girl) made from colourful plastic wrapping salvaged from the floral tributes.

UNITY is on display in the Museum Visitor Lounge on Level 3 until March 22.