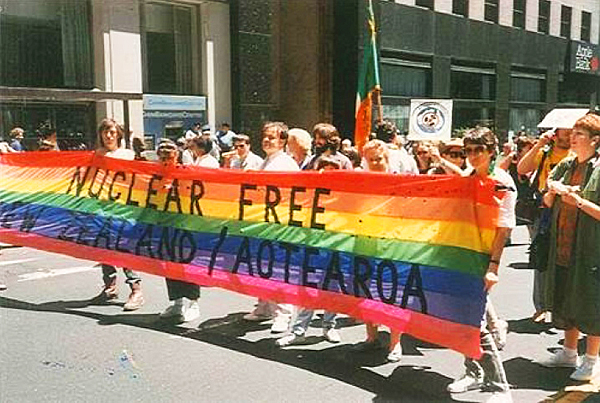 Kate Dewes and others carrying the banner at the NGO march in New York City in 1988. Image courtesy of Kate Dewes.

A colourful banner used by New Zealanders at anti-nuclear protests around the world has been gifted to Canterbury Museum.

Christchurch anti-nuclear campaigner Dr Kate Dewes donated the 5.5 metre-long banner, which she and others carried at demonstrations over the last 30 years, to the Museum earlier this year.

The banner bears the message, “Nuclear Free New Zealand/Aotearoa”. It was created for Dewes’ 1988 trip to New York, where she represented citizen groups on the New Zealand Government delegation to the United Nations Special Session on Disarmament III.

During that trip, Dewes and a group of New Zealanders carried the banner at a march through New York’s streets to promote the New Zealand Nuclear Free Zone, Disarmament, and Arms Control Act 1987.

In subsequent years the banner appeared at protests, events and conferences, including being displayed at a French submarine base protest in 1991 and attached to the side of the Greenpeace flagship Rainbow Warrior during the 1992 Rio Earth Summit.

It was also taken to most international meetings of the World Court Project, a 20-year international campaign to get the International Court of Justice to rule on the legality of nuclear weapons.

The banner’s most recent outing was in July 2017 in New York, when the United Nations adopted the Treaty on the Prohibition of Nuclear Weapons.

As part of Canterbury Museum’s collection, the banner will be used to inform and educate people about the efforts of New Zealand’s anti-nuclear campaigners.

Dewes says that while she’s sad to part with the banner, she is excited it will be cared for by the Museum.

The banner began life as a “symbol of hope” and was designed to show New Zealand was leading the way on anti-nuclear issues, she says. “It’s a real taonga (treasure); it carries a huge story and it brings people together.”

Canterbury Museum Director Anthony Wright says the Museum is honoured to be entrusted with the banner’s care.

“We started our Peace Collection in 2005 to recognise the important role peace movements have played in Canterbury’s history. This banner is a really exciting addition to that collection. It’s visually stunning and there are so many stories we’ll be able to tell with it.”

Note: Due to its size, the banner is not currently on display at the Museum, but it is planned to be used in future special exhibitions and public programmes.