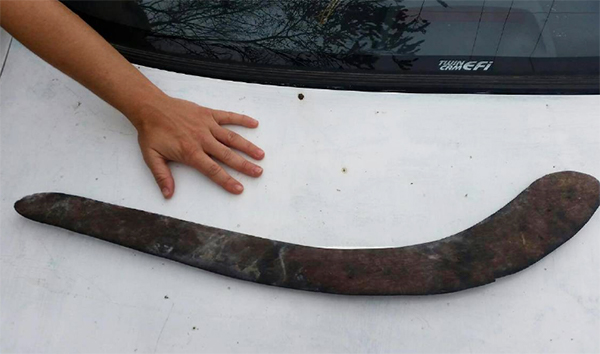 A stone-carved boomerang has been discovered by landowners in the bed of a creek next to their burnt out property at Cobargo. Picture: Supplied.

The ongoing bushfire crisis is quickly uncovering significant parts of Australian culture, some of which has remained hidden for years within the natural landscape.

A stone-carved boomerang has been discovered by landowners in the bed of a creek next to their burnt out property at Cobargo, after fire tore through the town on New Year’s Eve.

The fire can hurt some sacred sites, but there’s another side to fire – that it’s uncovered this. Rodney “Murrum” Kelly

Noting the significance of their find, the landowners contacted museum artefact repatriation campaigner Rodney “Murrum” Kelly, who said residents should be aware the fires may expose valuable cultural items and sites.

Traditional custodians have recently shared concerns culturally-significant sites between Biamanga and Gulaga mountains may be damaged or destroyed due to bushfires burning in the area since the start of the year.

“The fire can hurt some sacred sites, but there’s another side to fire – that it’s uncovered this,” Mr Kelly said. 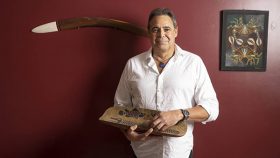 “I want to make people aware that this kind of stuff may be laying around. This is special because it’s one of the first things found around here from back in the day that’s not made from stone.”

Mr Kelly said he has heard of another boomerang being discovered in the region, adding it is uncertain how the stone tool carved item ended up in the creek.

“Either someone had it in Cobargo, or a blackfella has lost it before Europeans came here,” he said.

Director of the Australian Indigenous Archaeologists’ Association Dave Johnston said he is extremely interested in the discovery, and said the artefact could be carbon dated through his work with the National Centre for Indigenous Studies at the Australian National University.

“We would need to check with elders to see what they would like to do,” he said.

Mr Johnston said it was likely the boomerang had been in oxygen depleted swamp conditions before ending up in the creek where it was found.

Alongside university researcher Dr Duncan Wright and members of the Canberra Archaeological Society, he is offering to help communities undertake cultural heritage audits on Country in bushfire affected areas.

“This is the perfect time, and we are on call to come to communities whenever they are ready,” he said.

Last year Mr Johnson lobbied unsuccessfully for the creation of a national Indigenous heritage commission to oversee the preservation of cultural history.

Flinders University senior lecturer and Ngarrindjeri man Christopher Wilson is also interested in the Cobargo boomerang discovery, and said the oldest wooden boomerang, dated at 10,000 years old, was found in the Wyrie Swamp at Coorong by Dr Roger Luebbers in the 1970s.

Dr Wilson is currently both Indigenous liaison officer and co-chair of the Indigenous heritage team with the Australian Archaeological Association, and has successfully helped repatriate culturally significant items from institutions overseas.

Ms Manne said the complete removal of all ground cover in many areas due to the fires, could be seen from an archaeological standpoint as a “silver lining” to the fires, as it offers a short window of time to assess sites before regrowth occurs.

“With the approval of Traditional Custodians, these newly discovered sites can be placed onto heritage registers to protect them into the future,” she said.

“The communities can also have the opportunity to incorporate these places into living heritage narratives.

“Fires will have destroyed culturally modified trees, such as canoe trees; and fires can cause soft sandstone to crack or exfoliate, causing the complete destruction of grinding grooves for axe manufacture or for food production as well as painted or engraved Aboriginal art.

“Other cultural heritage made of stone, such as stone artefact sites, quarries and tool manufacturing sites and rockshelters with occupation deposits, are less vulnerable, but even stone artefacts can crack in intense heat and soot deposits can affect rock art pigments.

“In addition, with the loss of vegetation cover, erosion can damage the integrity of surface archaeological sites,” she said.

Mr Kelly said given the fact many culturally significant items still remain in museum basements and private collections around the world, he wants newly found artefacts to be cared and looked after by local communities and their elders.

He has now spent years lobbying the British Museum for the repatriation of Gweagal artefacts looted during Britain’s initial contact with Australia.

“I want there to be a museum somewhere on the coast, because items like this deserve to be appreciated while remaining on Country,” he said.

“It can’t go to a museum far away, or sit in a lands council office. It can’t be taken off Country. These things need to be respected.

“I’m hoping we can get all the research done on it here. At the moment I’ll keep hold of it until I know it’s going to be looked after. It could be a very significant find.

“This could be the stepping stone to where council starts to think about a central keeping place in our local area.”

He said it is likely more artefacts will be uncovered as the fires continue to burn on bushland where people were displaced during British colonisation.

“I am positive that if we had a crew, we would definitely find more stuff,” Mr Kelly said.