You are here: Home » Articles filed under: 'News' » Article: 'Collaboration as curatorial model' 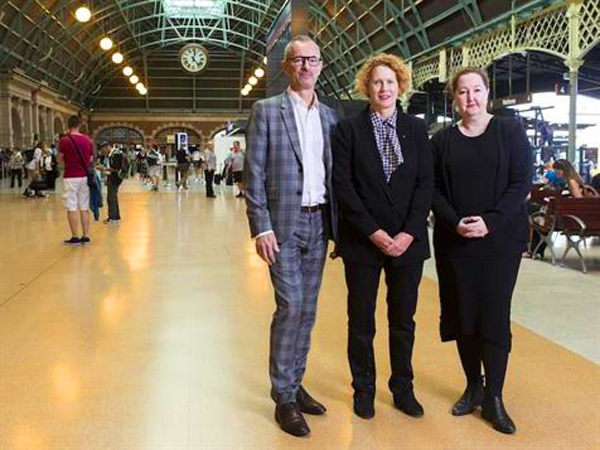 Michael Brand, Elizabeth Ann Macgregor and Lisa Havilah join forces to announce The National: they chose Central Station in Sydney to make the announcement to ensure neutrality and reinforce their joint platform; supplied.

A growing trend stimulates a rethink and a conversation about the effectiveness of curatorial collaborations as a new model for galleries.

This month the Bayanihan Philippine Art Project will be presented across five Sydney city and metropolitan venues, each exhibition individually curated but marketed under a single banner.

Earlier in the year (March-May), we welcomed the inaugural edition of The National: New Australian Art, a biennial style exhibition across three of Sydney’s major arts organisations, steered by a jointly formed curatorium.

And completing the trifecta in curatorial collaborations, Destination Sydney bought together three, second-tier metropolitan galleries in a shared narrative to bolster clout, trailblazing the idea back in 2015. Again, each show took its own curatorial direction but were packaged together to increase visibility and promote foot traffic.

What we appear to be witnessing is a new model within curatorial circles that attempts to better utilise resources between organisations – not just by partnering from a branding perspective, aka the traditional “cultural tourism trail” and shared advertising, but by shaping a shared curatorial vision.

This is not easy to do within a competitive environment where future programming is as guarded as hidden treasures. Traditionally, galleries and museums have welcomed partnering but have held their curatorial IP as sacred.

Katrina Cashman, Curator at Mosman Art Gallery (MAG) told ArtsHub: ‘This approach offers so much more than notions of simply sharing costs or marketing resources. It’s a meaningful opportunity, and offers a “testing ground” amongst trusted colleagues for curatorial ideas to incubate.’

MAG will be hosting a forthcoming seminar on the topic, which describes: ‘The model of art galleries and museums working collaboratively on innovative curatorial projects is the currency of our age.’

It continues: ‘Increasingly there is an expectation from funding bodies for institutions to develop successful partnerships and curatorial projects to support their programs.’

Director Mosman Art Gallery, John Cheeseman added: ‘Thinking collaboratively is thinking bigger and smarter, and is a clear sign that participating institutions are curatorially ambitious, innovative and open to ideas. I believe there are substantial opportunities for galleries and museums to engage in a greater range of collaborations that could range from regional groupings of institutions, to national and international partnerships of scale.’

The seminar, titled Collaborations and Partnerships – Towards new curatorial models and modes of working, will look at four case studies and will be held on 1 September.

‘One lesson from these case studies is that there is no standard way for institutions to collaborate – each project has taken a bespoke approach,’ Cheeseman added.

So is it really a new idea?

Collaboration is hardly a new concept within the visual arts. Artists have been collaborating on making work for centuries, if we think back to Atelier studios.

The touring exhibition has long been the primary mode for connecting galleries, through the sharing of exhibitions across multiple audiences. Parallel to that, there has been a growing adoption of cultural tourism as a means of broadening audiences – that is, strategically looking beyond your plot to the neighbourhood to partner and package programming. It is a way of minimising – or parcelling – expenditure for a maximum result.

So what is new here?

There is arguably another model emerging. This is where a single exhibition is presented across multiple venues. In an odd way it has the framework of a biennale, but when applied to the regional and metropolitan gallery sector it becomes a powerful way of aggregating programming and audiences.

He added: ‘The three participating venues created a temporary multi-­venue institution that has the size, reach and breadth of vision to compete with any major gallery in Australia.’

Director of SH Ervin Gallery, Jane Watters added: ‘Destination Sydney as an exhibition would not have had the same impact had it only occurred in only one of the galleries.’