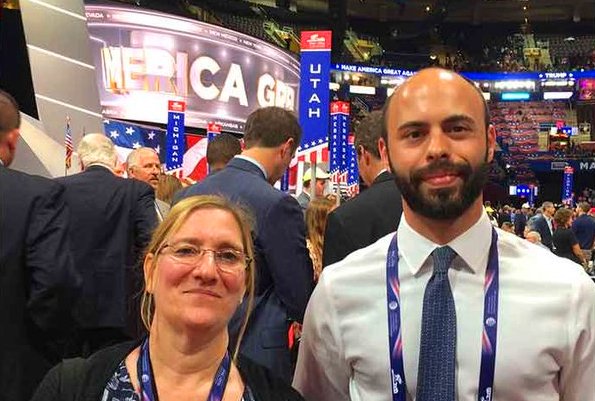 T.A. Frail, How Do Smithsonian Curators Decide What to Collect at the Political Conventions? Smithsonian, 27 July 2016

For Smithsonian’s Lisa Kathleen Graddy and Jon Grinspan, it’s trying to guess what people of the future will want to know about 2016

Here’s how glamorous it is to be a Smithsonian curator collecting artifacts at a national political convention: You’ve been working up to 12 hours a day for four days, most of them on your feet. You’ve been toggling between the great outdoors, where the heat index has been pushing 100 degrees, and an arena air-conditioned to the chill of a meat locker. You‘ve been asking intensely impassioned strangers to donate some of their most prized possessions for the sake of history, and you’ve finally scored an artifact you’ve been coveting from the opening gavel—a pair of those three-sided vertical state signs from the convention floor that direct delegates where to sit.

They are made of something like cardboard, so you don’t want to crush them. Yet they are triangular, and the edges are sharp enough to imprint the skin on your hand. Other convention attendees are heading out for their final night of partying, but you are heading for your car so you can entrust the signs to the safety of your trunk. Your car is parked many blocks away.

Then a pedicab looms out of the traffic. As you climb in, you might be tempted to think of divine intervention.

Yet this is the life Lisa Kathleen Graddy and Jon Grinspan, curators with the political history division of the Smithsonian’s National Museum of American History, have chosen. After the Republican National Convention ended in Cleveland last week, they shipped roughly 100 pounds of ephemera back to Washington, D.C. Then they headed for Philadelphia, for another round of collecting among the Democrats.

That’s what they do to document this moment in the nation’s political history—to gather the physical objects that express the passions and issues of the 2016 campaign.