You are here: Home » Articles filed under: 'News' » Article: 'Coming to terms with nature & ticking clock'

September 23rd, 2021 | Browse other: News. | Tagged with: Coming to terms with matters of nature and a ticking clock, Questions Raised by Quolls - Harry Saddler | 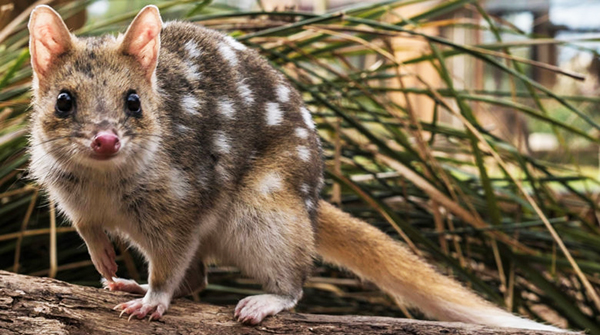 Before Harry Saddler puts down his pen, many quoll populations start to bounce back. Credit: Rewilding Australia.

Tim Flannery, Coming to terms with matters of nature and a ticking clock, The Brisbane Times, 21 September 2021

In 1956 Melbourne’s The Argus reported that a colony of eastern quolls inhabited the “wilder parts” of Melbourne’s Studley Park, just a few kilometres from the CBD. Gone by 1959, they were the last survivors of what had once been among the most abundant and conspicuous of all of Victoria’s marsupials. Indeed, a visitor to the state in the 1850s was more likely to see a quoll than a brushtail possum, which were then avidly hunted for their pelts. As foxes spread, eastern quolls vanished. By 1900 they were gone from most of Victoria, so their survival in the centre of the “great wen” that was 20th-century Melbourne is surprising.

In Questions Raised by Quolls, naturalist Harry Saddler tells us that quolls were the first carnivorous marsupials that he became aware of. They later became very important to him, and in the years before the COVID-19 pandemic, he describes searching those “wilder parts” of Studley Park. He discovered a “surprisingly empty bush”, devoid of small birds, and silent even at dawn.

Questions Raised by Quolls is a deeply philosophical book whose principal concern is questions that preoccupy its author as he searches for the last surviving eastern quolls. Saddler tells us about a visit to Studley Park on the first date in 2019.

“I was 39 years old, an awkward age to be single, an age when a person’s interest in having kids … [is] an instant deal maker or breaker.” Saddler still seems to be trying to make up his mind about fatherhood, and a large portion of his book is given over to arguments, made against a ticking clock, both for and against the idea.

Wider family concerns also feature. Saddler traces his family line back to his four-times great-grandfather Michael Farrell, who came to Australia in 1816, his convict transport passing what was to become the last home of the mainland eastern quolls in Australia – at Vaucluse.

The slender connection provides Saddler with the opportunity to quote the editor of Construction, who in 1953 said that one resident of Vaucluse had already killed five quolls in rabbit traps that year. By the time Farrell died in 1882, the quolls were already giving way to foxes. Sadly, we know nothing about Farrell’s interactions with quolls or any other native mammals, but Saddler does a good job of imagining what they might have been.

It was Saddler’s father who instilled a love of bushwalking into his son. The book opens with a reminiscence of bushwalking in the Walls of Jerusalem National Park when Saddler was in his late teens – old enough to join his father “on deep hikes … as something approaching equals”. Later in the book, Saddler describes how, as his father aged, Saddler became the adult, helping his father enjoy the walks that are so important to him.

Saddler lives in a shared house near Abbotsford Convent. The convent’s terrible history as a place where unwanted, neglected, disabled, destitute or “uncontrollable” females were forcibly detained and made to labour is deeply disturbing. But today it is a place of healing and a centre of community activity. Sitting there, watching the bees and sipping coffee, Saddler seems to reconcile with a decision not to have children – “if that’s the decision I make”. 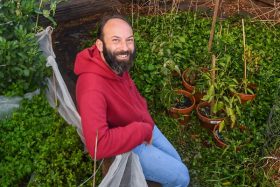 Harry Saddler’s book is important for its insights into the minds of a new generation of naturalists. Credit: Justin McManus.

Written during the Black Summer bushfires of 2019-20, and then the COVID pandemic during which Melbourne experienced five lockdowns that separated Saddler from the restorative therapy of his beloved deep and long bushwalks, he writes that “living in the present moment can feel like living under a rain of blows – with no hope of them ending any time soon”. 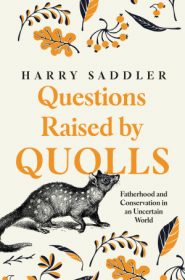 But before Saddler puts down his pen, the bush itself begins to recover from the flames, and many quoll populations start to bounce back. But Saddler also writes of regions such as subalpine Tasmania and the rainforests of the Border Ranges in Queensland, which will, researchers opine, never recover.

The eastern quolls of Vaucluse almost made it to safety. While I was curator of mammals at the Australian Museum in Sydney I received a letter, accompanied by a photograph of a litter of baby quolls, from a retired schoolteacher who explained that each year until the early 1970s eastern quolls bred in the pantry of his house, which was adjacent to Nielsen Park. Had the species hung on just a little longer, growing environmental awareness might have led to protection. But as it was, the council decided to clear the park of an infestation of lantana. Once it was removed, the teacher never saw the quolls again.

Questions Raised by Quolls is an important book – as much for the insights it provides into the minds of a rising generation of naturalists as for its documentation of the lives of quolls. If I can pick one fault, it is a lack of curiosity about the last mainland eastern quolls: why did they survive in the very centre of our two largest cities for so long?

They persisted in the face of an extraordinary density of domestic cats, all kinds of pollution, and even rabbit traps and speeding cars. Their valiant endurance in that heart of environmental darkness that is the inner city should teach us something. A deep understanding of the enigma might even enlighten us as to how we could restore eastern quolls to the mainland in future.

Tim Flannery’s most recent book, The Climate Cure, is published by Text ($24.99).