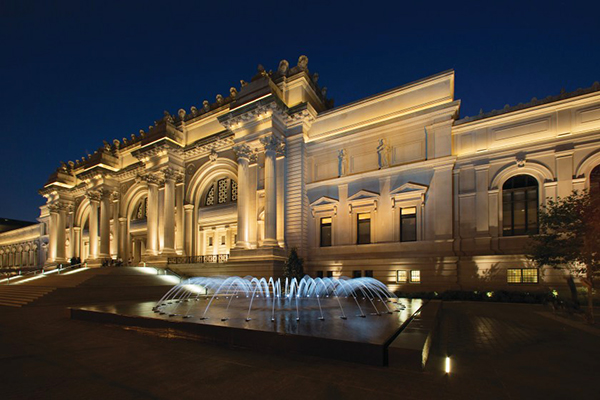 he David H. Koch Plaza at New York’s Metropolitan Museum of Art is named for the late billionaire trustee. Source: The Met.

That was some bombshell that New York’s Metropolitan Museum of Art dropped into the news cycle the other day.

The nation’s flagship art museum, sprawling home to the nation’s greatest collection of global art, is mulling whether to sell off paintings, sculptures and other art objects in order to help pay off a projected $150 million operating deficit caused by the COVID-19 pandemic.

Not wow to the size of the museum’s expected deficit, which we’ve known about since April. But a definite wow to the possible plan for settling it, a scheme the Met has hitherto always opposed.

The nation is in the throes of an epic catastrophe, one that has had a profound impact on all segments of daily life, including the cultural sector. Nothing short of an epic response will do. But, not one to let a good crisis go to waste, the museum with more resources and mor.e clout than any other is deliberating a plan to sell art to pay bills.

That is a stark admission of administrative failure. The COVID-19 crisis is effectively defeating America’s greatest art museum.

It gets worse. If the mighty Met dumps a traditional best practice, which prohibits cannibalizing the art collection to make operational ends meet, expect the floodgates to open. Museums from New York to Los Angeles and everywhere in between will follow the Met’s lead. A tipping point will have been reached.

But are we really supposed to believe that the Met needs to start rummaging around in its collection for buried treasure it might unload to make ends meet? When I reached out to the Met for clarifications, a spokesperson declined to discuss the possible sale of museum art to pay off the looming deficit.

The projected $150-million shortfall is an accumulation over slightly more than a year, ending this June. A typical Met annual operating budget is about $320 million.

Roughly half is covered by income on the museum’s $3.6 billion in endowments. The rest is realized through earned income — admissions, exhibition rental fees, shop sales, etc. — plus grants and gifts.

The Met is a tourist museum, so earned income has been battered. Its budgets rely on a sector of New York City’s economy not expected to recover anytime soon. The hit is big.

Yet, it’s that last item — gifts — that is most shocking. Met trustees established a special fund to deal with the pandemic crisis. So far, according to the museum’s spokesperson, the board has raised “just north of $25 million.”

That is, in a word, pathetic.

Since the pandemic began, America’s billionaire class has seen its wealth rise to astonishing levels. Americans for Tax Fairness, a coalition of 425 national and state organizations, reports “a staggering $1.1 trillion growth in the collective wealth of America’s billionaires — a nearly 40% leap — during the past 10 months of national emergency.”

Just for the sake of argument, let’s use Michael R. Bloomberg as an example. He’s not a Met trustee, so he won’t be pounced on at the March board meeting, but he is a well-known New York art maven and philanthropic billionaire.

According to USA Today, between mid-March and mid-October, his wealth increased by $6.9 billion. With a pledge of just 2.25% of that, he could settle the Met’s entire projected deficit all by himself.

Not 2.25% of his net worth, mind you, merely 2.25% of the unexpected pandemic windfall. I don’t know how many billionaires sit on the board of trustees, arguably the most prestigious and desirable in Manhattan, but I am comfortable going with the adjective “plenty.” Time to start writing lots more checks, or time to step aside.

I don’t know about you, but I am sick to death of reading about art museums and their scandalous schemes for stress-free fundraising by throwing principles to the winds and selling art from their collections to pay for programs, staffing and other operational costs, pandemic induced or not. In the last 10 months, museums in Long Beach, Palm Springs, Baltimore, New York’s Syracuse, Brooklyn and now Manhattan have been behaving badly.

No, the museum is not planning to wiretap patrons to find out what’s in their cellphones. But it is exploiting an ill-conceived directive issued in April by the hapless Assn. of Art Museum Directors.

AAMD was in a panic. With the confusingly new pandemic raging and cultural organizations being shuttered left and right, normal revenue streams, like admissions and gift-shop sales, had ground to a halt. A month before, the stock market crashed in a free-fall scarier than the Great Recession. Wall Street was in turmoil, interrupting the predictability of typically safe museum endowment investments and clouding the future availability of wealthy donors.

The directors group decided to temporarily lift the longtime ban on using deaccession funds to underwrite operations. Deaccessioning is the process by which art that is irreparably damaged, fake, duplicative, of lesser quality or otherwise no longer relevant to the museum’s mission is removed from the collection and disposed of, often through sale.

Deaccessioning is a routine activity of art collection management, but it is not a general fundraising tool. Such funds can be applied only to future art purchases. Heretofore, any museum trying to skirt that would be professionally shunned, its accreditation likely to be yanked.

Under an emergency two-year waiver, though, AAMD decided a museum confronting a pandemic-initiated financial crunch could use the proceeds from deaccessions to support direct care of the rest of its collection. All that it needed to do was publish on its website a statement itemizing what parts of the annual budget direct care might include. For two years, AAMD would look the other way.

What a museum could not do, however, is start sorting through the storage racks looking for salable merchandise. The revised directive is explicit: Money gained from routine collection management, past or present, could be redirected to cover some operating costs, but “this temporary approach is not intended to incentivize deaccessioning.”

Apparently, though, the waiver has incentivized the Met.

“This is the time when we need to keep our options open,” Met Director Max Hollein told the New York Times. As the story put it, the museum “has begun conversations with auction houses and its curators about selling some artworks to help pay for care of the collection.”

That’s not routine collections management; that’s treasure hunting down in the storerooms. Earned income remains low, but the Met marches on as if it hadn’t heard about restored investment markets.

What the Met is doing poses two grave dangers.

First, even the many art museum directors who oppose a rule change will begin to feel pressure from their own trustees to follow the leader: “Hey, the Met does it, why can’t we?”

Second, university art museums will face a special threat. Building a significant art collection is not the leading priority of the schools that house them: “Hey, we need a new chemistry building, let’s sell the Van Gogh!”

Selling art from the collection to pay the bills is tantamount to eating the seed corn. A museum’s collection is the reason it exists. But here comes the Met to tell us that, well, you know, sometimes things are so bad maybe you just gotta.

The irony is that the Met, with deep pockets and incomparably deep collections, is unlike almost every other art museum in America. It’s an anomaly — a tourist mecca in a wealthy international city that is the nation’s financial center. Those terms just don’t apply to art museums in Sacramento, Tulsa, Okla., or Coral Gables, Fla., which will shoulder the unintended consequences of what the Met decides.

In fact, the only analogous museum in the nation is a neighbor just down Fifth Avenue — the Museum of Modern Art, with its own deep pockets and incomparably deep collections. Other American art museums don’t enjoy the same privileges and resources as these two. (The Getty Trust’s endowment is almost twice the Met’s, but its museum is only one of four Getty programs.) MoMA’s director, Glenn Lowry, is on record favoring relaxation of standards to allow deaccessioning to fund programs, exhibitions and publications.

“None of us have a full perspective on how the pandemic will play out,” Hollein warned the newspaper, which apparently had been tipped off on the sales discussions by a hungry auction house. “It would be inappropriate for us not to consider it, when we’re still in this foggy situation.”

It was odd that Hollein was tasked with speaking on behalf of the museum. Yes, he’s the director, but he does not hold the administrative reins.

Those belong to Met President and CEO Daniel H. Weiss, a former college president. The Met is distinctive in giving the top job to an administrative chief executive officer, while the director ranks No. 2. The board of trustees has the ultimate say in establishing policy, and Hollein has an advisory role. But the final managerial decision rests with Weiss.

The CEO was nowhere to be seen in the story. Hollein was likely meant to lend a veneer of director credibility to the appalling plan. After all, when you are making the outlandish claim that the art market is an ideal solution to your museum’s pandemic crisis problem, best not to have the budget guy standing out front.