You are here: Home » Articles filed under: 'News' » Article: 'Communication as the cure, language can'

Communication as the cure, language can 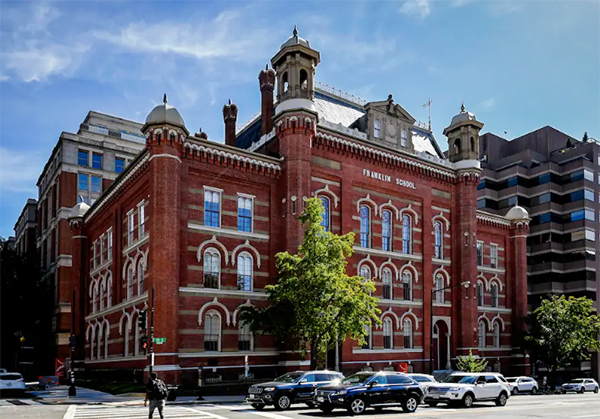 The Franklin School in downtown Washington has been empty for more than a decade, except for a brief period in 2011 when the Occupy Movement used it as a homeless shelter. One of the most significant historic structures in the city, and one of the most beautiful, the school was neglected and severely dilapidated. Preservationists have considered the brick building endangered since at least the 1970s, when the D.C. school board planned to tear it down.

On Thursday, the historical 1869 landmarked school will reopen, entirely refurbished and partly restored to its original condition, and once again serving something close to its original educational purpose. Planet Word, a museum devoted to language, is the new occupant, and it will pay the city $10 a year on a 99-year lease. The purpose of the $60 million museum, according to its gallery map, is to “inspire and renew a love of words, language, and reading in people of all ages.”

Created by Ann Friedman of Bethesda, Md., a real estate heiress and teacher who is married to New York Times journalist Thomas Friedman, Planet Word opens amid a pandemic that has decimated tourism in Washington. And it arrives less than a year after the closing of the Newseum, another immersive-experience venue that often struggled to define its scope, purpose and mission. Planet Word is a modestly scaled museum devoted to a huge subject: the way we learn, use and manipulate the words and grammar that define us. 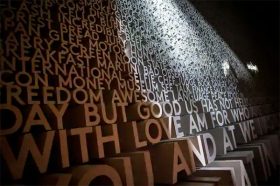 For humans, a museum of language may seem a bit like a museum of water for fish. There is nothing of our ordinary lives (except perhaps music, art and spiritual matters) that isn’t defined, exchanged or understood without it. But Friedman’s exhibition designer, Local Projects (which created the bombastically nationalist National September 11 Museum in New York City), has attempted to break down a vast subject so that visitors can be more cognizant of something they use reflexively and unconsciously.

In the first gallery, a video montage shows young children trying out their first words; in the second gallery, an interactive display with a 20-foot “wall of words” traces the complexity of the linguistic roots of English. Another large interactive space explores the diversity of the world’s languages, with native speakers explaining how differences in grammar and linguistic richness can create fundamentally different conceptual understandings of the world, and time. Smaller galleries explore rhetoric, humor and the use of language to sell us things, and to manipulate our emotions.

The exhibitions were designed to appeal to 10- to 12-year-olds. “There was a very specific reason for that,” Friedman said in an interview. “Kids at that age are the ones who are most likely to stop being readers, to stop reading for pleasure.” The museum, she says, will appeal to all ages, but to give the exhibitions focus, the designers decided to target kids who, on the cusp of adolescence, “are developing the social cognitive ability, the empathy to care about what people think, to know about the world, other people and other cultures. We thought that was the sweet spot.” 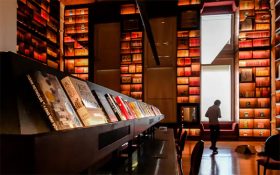 Although the museum includes a gallery focused on books (which come to “life” when placed on a little stand that triggers animations), it would be stronger and more engaging for adults if it included objects and artifacts beyond books. The use of technology is mostly effective, although sometimes unnecessarily complicated for the minimal didactic value, as in a gallery of digital paintbrushes that change the color and mood of a room based on basic adjectives that serve as the “paint.”

Nevertheless, even adults will learn things. A native speaker of Quechua, for instance, tells us on a video screen that her language conceives of the future as “behind” us because we can’t see it, while it is the past that lies in front of us. In “Words Matter,” the last of the museum’s 10 galleries, a gender nonbinary speaker explains the importance of enlarging our use of pronouns beyond “he” and “she,” one of several testimonials that touch lightly on the political and cultural fault lines of contemporary language.

The museum, which won’t charge admission, avoids directly engaging in partisan politics, but there is a distinct world view to its message, which is essentially that the old liberal idea of communication and exchange is a cure for all ills. This arose, in part, from an incident Friedman cites as her inspiration to create the museum, when a stone thrower in Jerusalem targeted her family’s rental car because of its Israeli license plate.

“I felt like you don’t know me, you don’t who I am,” she says, noting that her family had lived and worked throughout the Middle East.

“Right then and there, I vowed that when we moved back to America I would do something that would build community,” she said. That is, communication is the cure, reading is a form of cultural exploration, language can connect rather than divide us. What the world needs is more earnest efforts at honest communication.

All of this is true, and the idealism of it is as inspiring as the naivete of it is disquieting. Yes, the world needs more well-moderated panel discussions and inspiring TED talks, but even those are beginning to feel like luxury items enjoyed mainly by people with privilege. The world also needs a fundamental reordering of its priorities, a revolution of its political hierarchies, and a reconstitution of its economic systems. 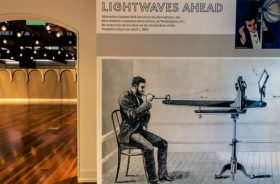 A mural on the wall is a nod to the historical significance of the building that houses Planet Word. (Bill O’Leary/The Washington Post).

Planet Word, which feels a bit like a museum conceived at the cocktail hour, doesn’t aim for anything so radical, but instead inhabits essentially the same universe as most of the museums that preceded it a century ago: It hopes to raise up the discourse, and spread the blessings of the educated and elite to those who hope to be educated and elite. Rather like the Newseum, which moved to a swanky new space just as the old world of print newspapers was imploding, Planet Word arrives just as we may be entering a post-liberal and even post-literate age. Language, today, is governed by new rules about who can tell what kinds of stories and, increasingly, a substitution of digital iconography — emoji and acronyms — for old-fashioned words composed of letters and phonemes.

Everything is up to date in this museum of video screens and touch panels except its founding principle, which is the old noblesse oblige. And one might overlook that but for one thing: Planet Word opens after one of the ugliest, saddest and most alarming chapters in the history of local historic preservation. 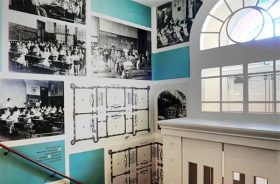 In September 2018, the city ordered all renovation work on the Franklin School to cease after the project’s architects at Beyer Blinder Belle discovered that large portions of the historically protected interiors, walls, plaster and tin ceilings, wainscoting and baseboards had been removed and destroyed. The mandate to preserve those interiors, which limited the possible uses of the building, had made the Franklin School a particularly difficult problem for the city and discouraged many developers who might otherwise have been interested in the structure.

Friedman, who had promised and was contractually obligated to preserve the interiors, said it was a mistake, despite having hired some of the most respected architects and preservation consultants in the city. Blame was never fixed, a minimal fine of $8,136 was paid — a trifle compared to the $35 million final cost to renovate the building — and Friedman’s team pledged to reconstruct much of what was removed. The building is beautiful inside, clean and light, just as Adolf Cluss, its original architect, intended. But it is no longer a historic interior, a fact not acknowledged in a museum souvenir book.

So, Planet Word opens under a significant cloud, and a museum that normally would be greeted with cautious optimism and goodwill arrives with a bitter sense of what might have been. The Franklin School is back, but it is now a monument to the loss of cultural patrimony and public trust.

If the pandemic ends and tourists flock to Planet Word, or if it becomes a beloved field-trip destination for students, the vast majority of its audience won’t care about this. But the old spirit of noblesse oblige was often troubled by a certain condescension, a sense that rules are for the little people. It’s still not clear what happened or who was to blame when the historic interior of the Franklin School, from which Alexander Graham Bell sent the first wireless communication in 1880, was destroyed. But it’s clear that words can never fix it.