You are here: Home » Articles filed under: 'News' » Article: 'Concern after Whitworth director forced out'

Concern after Whitworth director forced out 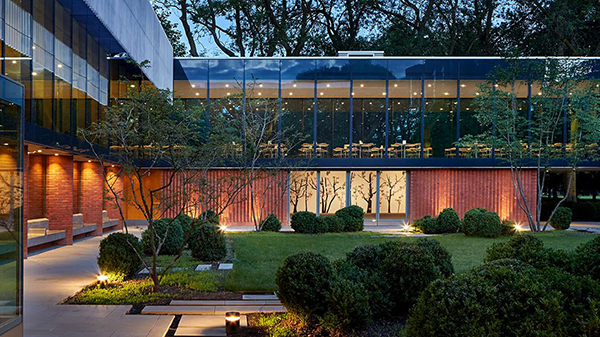 A view of the Whitworth Art Gallery Alan Williams.

There are calls for freedom of expression to be protected after a reported attempt to dismiss Alistair Hudson.

The reported attempt to dismiss of Alistair Hudson, the director of the Whitworth Art Gallery and Manchester Art Gallery, by the University of Manchester has caused widespread concern in the culture sector.

According to the Guardian, the University of Manchester has asked Hudson to leave his post after a dispute over a statement expressing solidarity with Palestine that appeared in an exhibition last year.

The newspaper reported this week that Hudson is being “forced out” following complaints about his handling of the situation. The university has not confirmed the report, with a spokesman saying: “Staffing matters are strictly internal to the university and we do not comment on questions of this nature, including in relation to our current Whitworth Art Gallery director.”

It is not clear how Hudson’s role as director of Manchester Art Gallery is affected by developments.

The controversy arose when the Turner Prize-nominated research agency, Forensic Architecture, published an introductory statement in solidarity with Palestine at the entrance to its Cloud Studies exhibition, which examined human rights abuses linked to chemical weapons and air pollution and opened in July 2021, around the same time as the most recent conflict between Gaza and Israel.

Statement from the Forensic Architecture exhibition

While working on this exhibition we witnessed with horror yet another attack by Israel’s occupation forces on Palestinians. Partners and friend in Gaza told us first-hand about their experiences of the attacks that destroyed multi storey buildings, homes, the offices of news organisations, schools, hospitals, and businesses. The ferocity of the bombing produced man made environmental disasters, with underground explosions leading to artificial earthquakes under Gaza city. At the same time, the targeting of agricultural storage facilities produced massive ‘air quakes’, with clouds of toxic fumes covering entire residential areas. Elsewhere across Palestine we saw the ethnic cleansing of Palestinian neighbourhoods by Israeli police and settlers, and raids and tear gas use against cultural centres, including that of our collaborators and friends in Dar Jacir.

We honour the courage of Palestinians who continue to document and narrate events on the ground and to struggle against this violence, apartheid, and colonisation. We believe that this liberation struggle is inseparable from other global struggles against racism, white supremacy antisemitism, and settler colonial violence and we acknowledge its particularly close entanglement with the Black liberation struggle around the world.

This led to an objection from a legal trust that works to support Israel, UK Lawyers for Israel (UKLFI), which said the statement was “factually incorrect and dangerously one-sided”. The gallery agreed to remove the statement, whereupon Forensic Architecture said it would close the exhibition. Hudson then reversed this decision, saying the exhibition would reopen with the statement published in full, as well as a statement from the Jewish community.

Jonathan Turner, chief executive of UKLFI, told Museums Journal that the trust had objected to several “misrepresentations” in the text. “The allegation that Israeli bombing caused earthquakes and ‘airquakes’ is particularly egregious,” he said.

Turner said the trust had submitted two complaints – one about the statement itself and another about a statement of support for Palestine and “decolonialisation” that was posted on the gallery’s website in June 2021.

Turner confirmed that the trust had urged the university to “consider appropriate disciplinary action” against Hudson in September last year.

He said that this was because Hudson had allegedly given the university’s vice chancellor assurances that the accuracy and legalities of the statement had been established, despite a Freedom of Information request showing that no such investigation had been carried out.

Forensic Architecture has said it strongly refutes the suggestion of any inaccuracies in the exhibition.

The development has led to fears about curatorial independence and artistic freedom among the arts and culture community.

Sharon Heal, director of the Museums Association, said: “Reports that the University of Manchester has dismissed Alistair Hudson are extremely concerning. The Code of Ethics for museums is clear that museums and all that work in with them should support free speech and freedom of expression and respect the right of all to express different views within museum spaces.

“Museums should be able to promote debate and engagement on controversial issues, including working with artists and communities that are directly impacted by those issues. People working in museums should not fear for their jobs as a result of this work, and it is vital that governing bodies defend their organisation’s freedom to explore contemporary issues.”

A spokeswoman for Forensic Architecture told Museums Journal: “One would think that a university-run art museum would be doubly protected from this kind of targeted intervention, as a matter of both freedom of research and freedom of expression; in this case the university has failed to uphold experimental, creative research-based practice and in so doing, sided with those who seek to suppress knowledge.”

Earlier this week, Forensic Architecture tweeted: “All members of FA are shocked and enraged at this blatant punishment and vengeful attempt to suppress solidarity with Palestinians who continue to face violent human rights abuses and apartheid by Israel in Palestine and beyond.”

Another commentator, Naomi Waltham-Smith, called Hudson’s sacking “a flagrant attack on his freedom of expression and, in closing down the sharing of knowledge on campus, on free inquiry, reflecting a breach of institutional autonomy”.

In a statement on 24 February, the University of Manchester said: “We would […] like to address the explicit criticism in the coverage that the university has in some way suppressed academic and artistic freedoms, particularly in relation to the Cloud Studies exhibition by Forensic Architecture last year.

“We refute such claims entirely; indeed the university went to great lengths to ensure that the Cloud Studies exhibition remained opened for the full period that had been planned. The University’s position was clearly articulated in a statement that accompanied the exhibition.

“Museums and galleries have traditionally been a space of experimentation and challenge and we hope that the Whitworth is a place where we can debate, discuss and disagree well. As a university and gallery, there are various rights and duties which apply across our work, including the protection of academic freedom, freedom of speech and expression and duties under equality laws (including the public sector equality duty.)

“We work tirelessly to ensure that these rights, and our duties (including our public sector duties), are considered fully and carefully.

“Such media speculation and reaction is very unhelpful and will have caused unnecessary concern and questions for many of our staff, students and stakeholders.”

Museums Journal has reached out to all parties for further comment.

The headline and some wording has been changed to reflect the fact that Alistair Hudson is reportedly under pressure to resign but has not yet left the organisation.