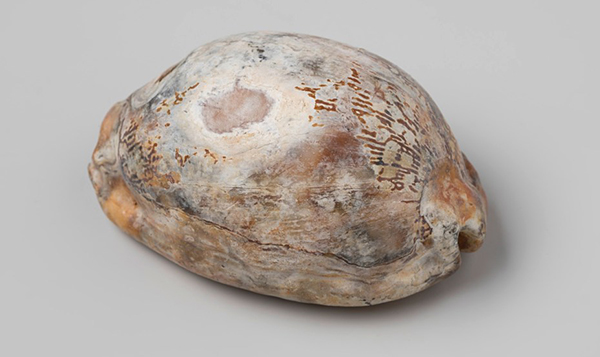 From Leonardo to Rembrandt, artists were drawn to these soft and glowing forms.

Shells have long been valued by societies all over the world for their diversity, beauty, and luminescence. Evidence from the Middle Stone Age tells us that shells were the first objects to clearly be used as personal decoration, and in more recent history, shells were a crucial inspiration for artists like Leonardo da Vinci, Rembrandt, and Clara Peeters.

In Conchophilia: Shells, Art, and Curiosity in Early Modern Europe published by Princeton University Press, Marisa Anne Bass, Anne Goldgar, Hanneke Grootenboer, Claudia Swan, and other art historians explore why shells appeared so frequently in the curiosity cabinets, paintings, prints, furniture, vessels, and other arts of Holland, Germany, France, Italy, England, and other areas of Europe from the 16th to 18th centuries. The exquisitely illustrated, thought-provoking book examines the complicated provenances, varied uses, and key role of shells in shaping this period’s visual and aesthetic culture. 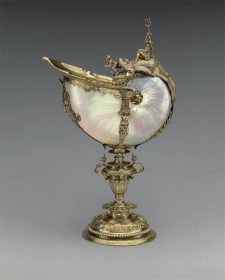 Treasured shells came from Europeans’ expanding global trade routes and colonization networks, which made shells from distant lands like Indonesia, the Cape of Good Hope, and the Antilles suddenly available to eager collectors. For the wealthy aristocrats and elite citizens who coveted them, exotic shells were sensual, fashionable status items that sparked wonder about nature’s bounty and God’s vast powers of creation.

Most Europeans never saw the crustaceans and mollusks that originally occupied their shells, and few were concerned with the places and people that provided them. But Conchophilia emphasizes that the trade of shells and slavery were closely linked. “European trade in the East sourced the cowries to conduct the slave trade,” Swan writes. What’s more, enslaved people and servants executed a great deal of the labor that shells required before entering collectors’ hands.

“Someone gathered the shells, scrubbed them, and cleaned out their original inhabitants, and someone may have polished and even carved them before they were shipped halfway around the globe,” Swan continues. Shells found on the beach were often damaged by exposure to the sun, waves, and sand, which meant that perfect (and sometimes venomous) specimens often had to be caught live, and in risky conditions.

Though most Europeans ignored this phase of their shells’ lives, the process is alluded to in a hand-colored engraving and frontispiece of “The Ambrose Curiosity Cabinet” (1705), where two Black figures — one just a small child — gather rare shells on the ground outside of an elaborate chamber while European men sort and speculate over these imported luxury goods at a large table inside.

A fascinating essay by Stephanie S. Dickey explores Rembrandt’s own obsession with shells, and the parallels between the shell and print collecting markets of his time. Rembrandt produced three versions of “The Shell (Conus Marmoreus)” (1650), an etching of an Indo-Pacific snail. Some years earlier, he’d paid the highest price for a shell recorded in 40 years of Amsterdam auctions, which became part of his own personal collection of naturalia. As delicate multiples, shells and prints fetched similar prices, and both required special containers — cabinets or albums — for their storage. Sharing these objects with visitors provided “an experience that was both privileged and intimate, and often tactile as well as visual,” Dickey explains.

As with other popular collectibles like coins, porcelain, and stones, part of shells’ draw came from the pleasures of touch. When handled, some shells evoked soft, glowing skin, and even human orifices; especially anthropomorphic species appeared in the era’s artworks as allusions to male and female genitalia. Shells and bodies also collided in elaborate drinking vessels, which often featured idealized nudes, mermaids, and love deities in their gold and silver mounts. But ultimately, the shells Europeans coveted were “a fragment of a former life, an architectural remnant that has outlived its former architect,” Bass notes. The rich scholarship in this book is worth a deep dive. 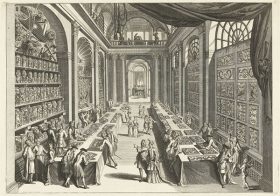 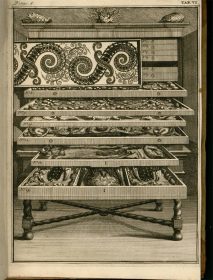 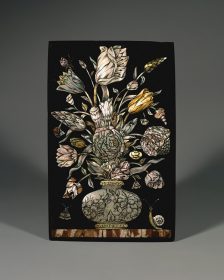 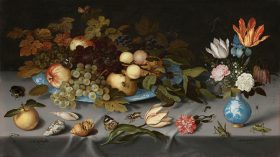