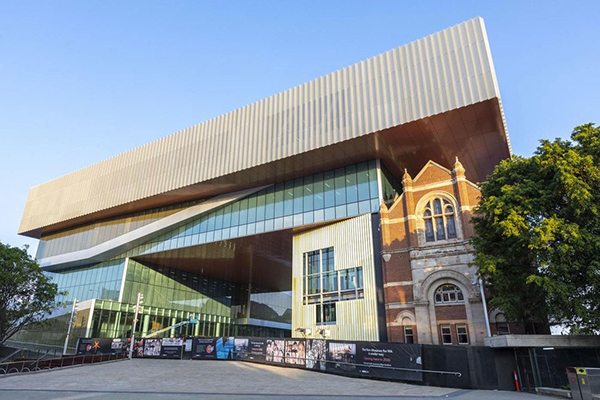 Ashlea Halpern, 9 Museum Openings Worth Planning Trips Around in 2020,3 March 2020

Go ahead and add them to your calendar.

Some people travel to try out critically acclaimed restaurants, jockeying for dinner reservations before they even lock in a flight. Others are motivated by the promise of an extraordinary hotel or resort. But as for the culture vultures? Well, nothing gets us moving quite like word of a groundbreaking new museum—and fortunately, this year will see a flurry of development on that front, all across the globe. From an ultramodern shrine to Olympic greatness in Colorado Springs to the long-awaited Grand Egyptian Museum in Cairo, 2020 is gonna be big. Here are nine openings to keep on your radar.

This new contemporary art space, a satellite of Crystal Bridges Museum of American Art, opened late last month in downtown Bentonville after much anticipation—and for good reason. With project lead Calli Verkamp at the helm, Chicago’s Wheeler Kearns Architects transformed this former Kraft cheese factory into a multi-functional venue that caters to the visual, performing, and even culinary arts. Some 24,000 square feet are earmarked for galleries and The Momentary’s first exhibition, State of the Art 2020, features more than 100 works by 61 U.S. artists including Mae Aur of Memphis, Jiha Moon of Atlanta, and Alice Pixley Young of Cincinnati. In mid-July, The Momentary will unveil Nick Cave: Until, an immersive exhibition in which the prolific artist will engage with issues of race, gender, and gun violence. 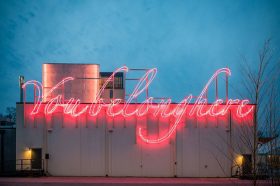 Courtesy of the Momentary / Stephen Ironside.

The Ainu term upopoy means “singing in a large group,” and when the museum and park of the same name opens in Japan on April 24, it will give voice to a culture verging on extinction. Concentrated largely in Hokkaido, the northernmost of Japan’s main islands, the Ainu people were among the country’s earliest inhabitants; UPOPOY, built on Lake Poroto in Shiraoi, about 60 miles from Sapporo, will serve as a long-overdue hub for the preservation of their ancient indigenous culture. Exhibits in the project’s museum will cover the Ainu language, history, beliefs, and traditions, and a 100-seat theater plans to screen films about Ainu culture, while the lush, landscaped outdoor park will host traditional Ainu cultural experiences such as cooking classes, wood carving, and embroidery. “The Ainu people have developed their own language, oral literary arts, traditional dance, unique rituals, and original musical instruments,” says Yoshiyuki Takasago, director for comprehensive Ainu policy office, cabinet secretariat. “[But] the Japanese people have not fully understood the value of the Ainu culture historically. We believe that UPOPOY will promote a broader and deeper understanding.” 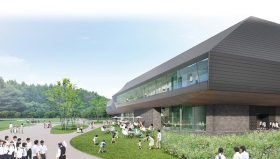 When it celebrates its grand opening in late May, the $90 million U.S.O.P.M. will mark a surprising milestone, becoming the only museum in the United States dedicated exclusively to the past, present, and future of the Olympic and Paralympic games. Roughly a third of the 60,000-square-foot building, designed by New York–based firm Diller Scofidio + Renfro, will be devoted to interactive exhibitions, including a simulator room that allows museum-goers to test their skills at six different sports, like a 30-meter dash, alpine skiing, and archery. It will also house the U.S. Olympic & Paralympic Hall of Fame, as well as one of the most extensive medal and torch collections in the world, with items from the Atlanta 1996 Summer Games, Sydney 2000 Summer Games, Sochi 2014 Winter Games, and PyeongChang 2018 Winter Games. At the heart of it all, though, is a focus on the personal journeys, triumphs, and challenges of various Team USA athletes. In fact, the museum teamed up with StoryCorps at a U.S.O.P.A. reunion in Colorado Springs this past November so that athletes, coaches, and family members could share and preserve their stories for future generations. 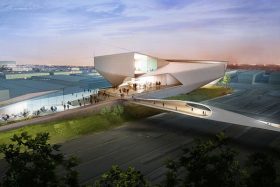 Once among the city’s centers for trade, Paris’s 131-year-old Bourse de Commerce building is on track to reopen in June as the city’s newest contemporary art museum. Only a five-minute walk from the Louvre, the building’s $170 million overhaul was spearheaded by Pritzker Prize-winning Japanese architect Tadao Ando (of the Chichu Art Museum in Naoshima, Japan, and the Pulitzer Arts Foundation in St. Louis). When complete, the museum will showcase more than 5,000 works of 20th- and 21st-century art from Kering fashion group founder François Pinault’s personal collection, plus a restaurant helmed by French father-son culinary duo Michel and Sébastien Bras (of Michelin-starred Le Suquet in Laguiole, France), and a 300-seat auditorium for screenings, lectures, concerts, and black-box performances. In addition to themed shows featuring contributions from multiple artists and career retrospectives, be on the watch for newly commissioned works and site-specific projects. 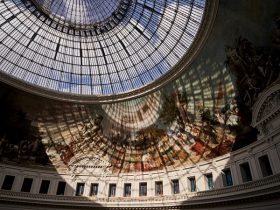 True to its name, the forthcoming Museum of the Future, whose opening this fall will coincide with Expo 2020 Dubai, will explore the challenges and technologies that shape and change our modern world. Exhibits at the museum will tackle issues like climate change, sustainability, artificial intelligence, food security, and medical breakthroughs, with interactive displays that invite museum-goers to learn about innovative prototypes and inventions. Even the building itself—a 322,917-square-foot LEED-certified torus with an elliptical void, dreamt up by local architecture firm Killa Design—is pioneering, with windows that take the form of Arabic calligraphy, featuring quotes from Sheikh Mohammed bin Rashid Al Maktoum, the ruler of Dubai. 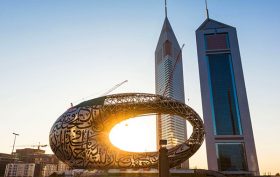 For far too long, the museum dedicated to Edvard Munch, the 20th-century Expressionist painter and arguably Norway’s most famous artist, was scrunched into a far-too-small venue east of Oslo’s city center. That will all change when it reopens this fall in a landmark building designed by Spanish architects Estudio Herreros on the city’s Bjørvika waterfront. The collection will finally have room to breathe, with more than 400 of the artist’s pieces displayed across seven floors and 11 exhibition halls. Though Munch is best known for The Scream, the museum’s comprehensive collection of original artworks, texts, photographs, documents, and personal belongings captures the full scope of the Norwegian painter’s artistic genius. 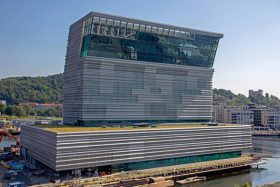 We reported everything we know about this landmark opening in January, but it bears repeating: When this $1 billion project finally wraps in late 2020, it’s expected to be the largest archaeological museum in the world, attracting five million visitors right out of the gate. Located on the Giza plateau, just outside central Cairo, the GEM’s main galleries will house the world’s largest collection of Egyptian artifacts (including the complete contents of Tutankhamun’s tomb) and will overlook the great pyramids of the Western Desert. Visitors may want to set aside two days to take it all in; GEM’s eight restaurants and 28 gift shops will keep them busy on-site. 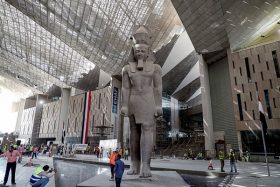 Come November, Western Australia will see its history reimagined when a $261.6 million complex devoted to the plants, animals, and people of its region opens in Perth. The project incorporates parts of the area’s existing Western Australian Museum Perth—including four heritage-listed buildings that have been refurbished—and also sees to the addition of a new state-of-the-art museum, effectively tripling the size of the former institution. The purpose-built space will feature eight new galleries, including a space devoted to touring exhibitions, plus learning studios and a new retail boutique and café. International design studios Hassell and OMA are behind the wildly imaginative project, whose cavernous spaces, gold glass, and metallic finish were, according to press releases, inspired by the wild landscapes of Western Australia. In that same spirit, forthcoming exhibitions will spotlight the state’s rich mineral heritage and celebrate its Aboriginal culture. 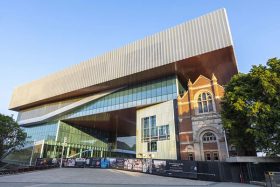 The second half of 2020 will see a major shift in Moscow’s already influential art scene, when GES-2, a contemporary art center, opens in a former power plant near the Kremlin. Backed by Russian billionaire Leonid Mikhelson, the conversion was handled by the Renzo Piano Building Workshop and now the massive, 430,556-square-foot complex will house an artist residency block, education center, library, and 420-seat playhouse. It will also serve as the new, permanent home of the V—A—C Foundation, an international non-profit that aims to promote emerging contemporary artists in Russia and the former USSR. Its opening exhibition, Ragnar Kjartansson: Emotion as a Medium, will feature a site-wide takeover by the Icelandic performance artist, followed by a mix of temporary exhibitions, events, workshops, music, and theater spotlighting artists living and working in Russia and beyond. Seasonal themes will wrestle with “the clichés and cultural tropes around Russia,” according to a press release, that include “great literature, tyranny, the mother archetype, a propensity for melodrama, moral relativism, [and] cosmos as an emblem of geo-cosmo-political superiority.” We can’t wait to dive in. 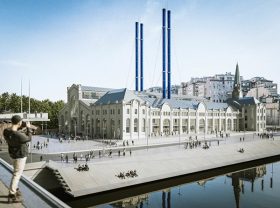