You are here: Home » Articles filed under: 'News' » Article: 'Conservation on show' 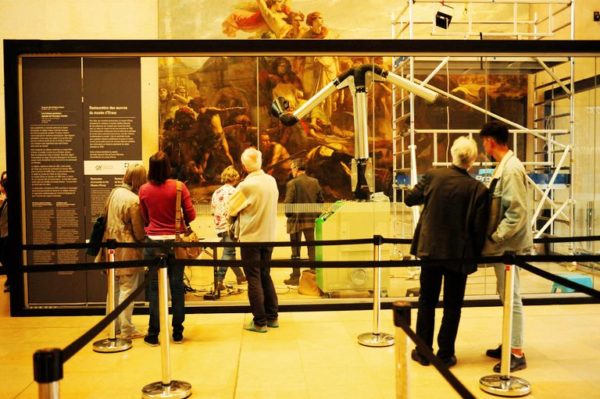 Auguste-Barthélemy Glaize’s “The Women of Gaul” being restored at the Musée d’Orsay. Credit Agnes Dherbeys for The New York Time.

PARIS – It’s showtime at the Musee d’Orsay – the electric moment when visitors pause in the grand public art galleries here, all to watch varnish dry.

They gather in silence to gawk at the paint whisperers – small teams of conservators poised on scaffolding and encased in two glass cubes.  From these makeshift stages, they swipe away centuries-old dark grime on precious works – from Gustave Courbet’s enormous oil painting of his crowded studio to Auguste-Barthelemy Glaize’s violent battle of a stone-throwing female revolt against Roman invaders, ‘The Women of Gaul’.

Ordinarily such a delicate task is carried out in the tranquillity of a laboratory.  But the once mysterious craft is increasingly turning into a high-end reality show – long-running spectacles that appeal to donors who lavish money on makeovers, but trouble some conversators accustomed to quiet and absolute concentration.

In Cincinnati, the city’s public measure featured its chief conservator, Serena Urry, last winter in a three-month exhibition, “Conservation on View: Zaragoza’s Retablo of St. Peter’.  She worked in a white lab coat in the middle of a public gallery across from the café – her work table spread with tools and swabs to remove varnish and overpaint from a gilded, 600-year-old Spanish altarpiece.