Conviction Politics: The Convict Routes of Australian Democracy explores the story of radicals and rebels transported as political convicts to Australia, their activism in their place of exile, and spirited collective resistance by ordinary convict workers. This international digital history project is proud to launch its centrepiece: an online Transmedia Hub and a sequence of short documentaries. Using a mixture of compelling animation, live action and music, the documentaries reveal the enduring impact of democratic reformers, labour protestors, and revolutionaries exiled as political prisoners to Australia in the late 18th and 19th centuries.

The launch is part of the UK/Australia Season – an initiative of the British Council and Australian Government – showcasing cultural and higher education collaborations between the two countries.

The Hub will be formally launched by ACTU Secretary Sally McManus on Thursday 2 December 2021 at the Exhibition Space H116 of Building H, Level 1, on the Monash Caulfield Campus.

The launch event will showcase several documentaries, animations and songs developed by award-winning media production partner Roar Film in collaboration with the team. Finally, a panel discussion featuring several of the project’s researchers will explore this shared history of struggle with lessons for today. 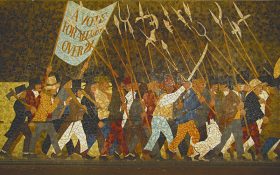 Conviction Politics is an international digital history project funded by the Australian Research Council and based at Monash University in Melbourne, with researchers and collaborators based at universities in Australia, the UK and Ireland. Its partner institutions include archives, museums, libraries and unions, such as the NSW Teachers Federation, the ACTU’s Union Education Foundation, the Australian Manufacturing Workers’ Union, the Tasmanian Musuem and Art Gallery and Libraries Tasmania. The project also partners with Roar Film, an award-winning digital media production company based in Hobart with expertise in documentary, drama, educational content and musical theatre. Click here to find our more about Conviction Politics.

The project is located in Monash University’sSchool of Media, Film and Journalism– a dynamic environment for teaching and researching across these disciplines in the Faculty of Arts – working in close collaboration with the Monash Sensilab, a bespoke interdisciplinary laboratory at the intersection of technology and creativity. Both the School of Media, Film and Journalism and Sensilab are located at Monash’s Caulfield campus – a vibrant, creative precinct encompassing teaching, research, and collaboration contributing to innovative dialogue and exchange.

Positions Vacant » View All
» Public Programming Specialist – Te Papa
» Procurement Manager – MAAS
Latest News » View All
Vale Terry Teachout – remarkable critic, biographer & playwright
- Washington Post’s obituary Read more.
6 really, really small (and really good)
museums around the world Read more.
Bendor Grosvenor’s idiosyncratic best
of art world 2021 Read more.
Dutch cultural instns reopen as nail salons
& gyms to protest unequal covid restrictns Read more.
Perniciously polarized democracies – where
next? - Carnegie Endowment for Intl Peace Read more.
Top +
Council of Australasian Museum Directors, c/o Ms Daryl Karp, Museum of Australian Democracy at Old Parliament House PO Box 3934 Manuka, Australian Capital Territory 2603 Australia, © CAMD 2022
Copyright: All information and resources provided on this website remain the copyright of the Council of Australasian Museum Directors. Permission is granted for viewing and downloading for personal and not for profit purposes. Those wishing to reproduce any materials for commercial, educational or other uses are requested to contact us.
Disclaimer: The content of this website is provided for information purposes only and is not intended as a substitute for professional advice. No claim is made as to the accuracy or authenticity of the content of the website. The Council of Australasian Museum Directors does not accept any liability to any person for the information or advice (or the use of such information or advice) which is provided on this website. The information on our website is provided on the basis that all persons accessing the site undertake responsibility for assessing the relevance and accuracy of its content. No responsibility is taken for any information or services which may appear on any linked web sites. Hostgator.
.