Caroline Baumann was reportedly forced to resign from the New York museum after concerns raised about her 2018 wedding. 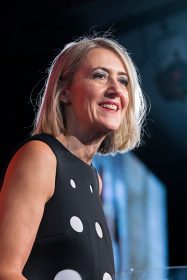 The Cooper Hewitt, Smithsonian Design Museum in New York is under the interim directorship of the Smithsonian Institution’s provost following the controversial ouster of its director arising from an inquiry related to her 2018 wedding.

The provost, John Davis, who also holds the title of undersecretary for museums, education and research, already oversees all 19 of the Smithsonian museums, many research units, the National Zoo, multiple offices and programs related to education and the Smithsonian press and libraries. A Smithsonian spokeswoman, relaying Davis’s interim role at the Cooper Hewitt, says that the institution was also preparing to begin a hunt for a new director and would form a search committee.

The New York Times reported that the museum’s director, Caroline Baumann, was forced to resign from her position on 7 February after an investigation by the Smithsonian’s inspector general into how she obtained the dress for her 18 September 2018 wedding and secured the site for the ceremony. The newspaper said that the inspector general had questioned the discrepancy between the $750 Baumann paid for the dress, created by the designer Samantha Sleeper, and the $3,000 starting price for gowns advertised on Sleeper’s website.

The Cooper Hewitt plays a key role in showcasing design and designers through its exhibitions and events like its National Design Awards.

The Smithsonian’s inquiry also focused on the location of the ceremony, LongHouse Reserve in East Hampton, New York, which has ties to the Cooper Hewitt and did not charge Baumann for the use of its facilities, the Times reported.

The museum declined to comment on the inquiry or the reason for the director’s ouster, saying that her departure was a confidential personnel matter.

Six trustees on the Cooper Hewitt’s advisory board have resigned to protest the removal of Baumann on the ground that the action was unwarranted and that in any case they should have been consulted, the Times reports. “Caroline’s treatment violates every principle of decency, and I feel that remaining on the board tacitly condones this behavior,” the board’s secretary, Judy Francis Zankel, says in a resignation letter, according to the newspaper. She called Baumann “an exemplary leader who gave everything to her job.”

“To say that the punishment does not fit the crime is an understatement,” the Times also quoted the letter as saying.

The museum’s website lists 27 trustees, including the six who have reportedly resigned.

“I know some of them were unhappy,” the Smithsonian spokeswoman says. “I can’t comment.”

Positions Vacant » View All
» Head of Collection Care – AWMM
» Director, Comms, Powerhouse Program – MAAS
Latest News » View All
Benin Prince seeks return of Bristol’s
Benin Bronze - broader restitution dialogue Read more.
ACE asks Institute of Art & Law to develop
guidance for UK museums on restitution Read more.
Magnetic Is giant clam bleaching extends
QMN & clam-raiser Rick Braley monitoring Read more.
SAM & UC Riverside describe Ediacaran
fossil as earliest bilaterian organism Read more.
Te Papa visitors consider self-isolating
due to Ruby Princess passenger contact Read more.
Top +
Council of Australasian Museum Directors, c/o Ms Daryl Karp, Museum of Australian Democracy at Old Parliament House PO Box 3934 Manuka, Australian Capital Territory 2603 Australia, © CAMD 2020
Copyright: All information and resources provided on this website remain the copyright of the Council of Australasian Museum Directors. Permission is granted for viewing and downloading for personal and not for profit purposes. Those wishing to reproduce any materials for commercial, educational or other uses are requested to contact us.
Disclaimer: The content of this website is provided for information purposes only and is not intended as a substitute for professional advice. No claim is made as to the accuracy or authenticity of the content of the website. The Council of Australasian Museum Directors does not accept any liability to any person for the information or advice (or the use of such information or advice) which is provided on this website. The information on our website is provided on the basis that all persons accessing the site undertake responsibility for assessing the relevance and accuracy of its content. No responsibility is taken for any information or services which may appear on any linked web sites. Hostgator.
.