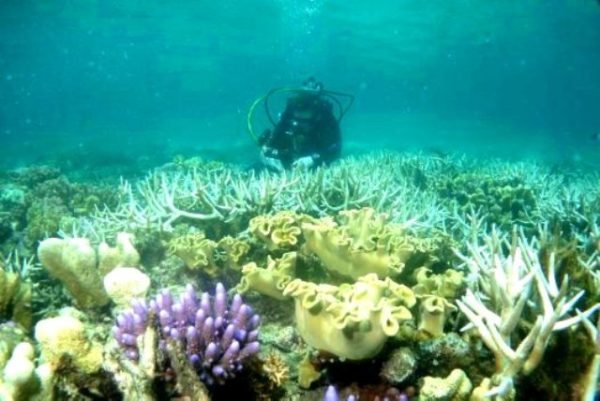 The AM’s Lizard Island Research Station (LIRS) is located in the far northern sector of the Great Barrier Reef, around 240 kilometres north of Cairns. Running since 1973, it annually supports more than 100 research projects by 350 researchers and their assistants. As the recent wave of coral bleaching is occurring in that very region, it has been of great concern to visiting scientists as well as those based at LIRS.

Having initially stated in his blog on 11 March that the bleaching event is the worst since 2002, Dr Lyle Vail, a director of the research station, has concluded it has become more severe due to the current climactic conditions (high UV and temperatures).

“This is by far the worst bleaching event to hit Lizard Island that we’ve seen,” he said.

“Virtually 100% of corals in shallow water sites (0 to 3 m) around Lizard Island, and not just in the lagoon proper, are mildly to severely bleached. Mortality in this depth range is at least 20% overall for all corals (hard and soft). In some species like branching corals more than 50% have already died. There is even significant bleaching down to 15m, although rates of mortality at this depth are currently low (probably less than 5%).”

Despite this immensely worrisome report, there is potentially some positive news on the horizon. The water temperature is gradually starting to go down, with 28 March being the first day that all Australian Institute of Marine Science monitoring stations reported temperatures below 30°C. The National Oceanic and Atmospheric Administration bleaching forecast site is predicting the peak of the bleaching has been reached and that conditions will continue to improve for corals over the following weeks.

“Undoubtedly more corals will die before this is over as they are significantly stressed. We’ll have a better idea in 6–8 weeks about the percentage that have pulled through,” said Dr Vail.

The reef has shown its resilience to recover during previous bleaching events and cyclones. In order to protect the reef in future, the human induced impacts of climate change will need to be minimised.