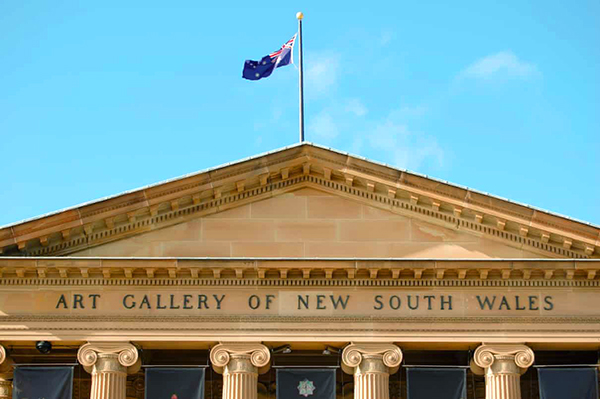 Art Gallery of New South Wales is among many NSW institutions looking to reopen on 1 June, when coronavirus restrictions are further lifted. Photograph: sourabhj/Getty Images/iStockphoto.

Elissa Blake, Coronavirus NSW: galleries and museums scramble after unexpected lifting of restrictions, The Guardian, 20 May 2020

Several institutions were taken by surprise when the premier said they could reopen on 1 June.

Art galleries and museums in NSW are scrambling to prepare for visitors again after being somewhat taken by surprise by Gladys Berejiklian’s announcement that they could reopen from 1 June.

The announcement, which came alongside an opening up of travel restrictions across the state, came sooner than expected for the gallery and museum sector, which on Tuesday was still waiting for the NSW government to provide clear protocols on how institutions could operate with social distancing.

Visitor numbers will be capped according to the 4msq-per-person rule. Movement through spaces will need to be tightly managed to prevent people pooling around exhibits. Group tours will not be permitted, and gallery and museum eateries will have to observe the same social distancing regulations that apply to cafes and restaurants outside.

More detail was expected in the next 24 hours.

Liz Ann Macgregor, director of Sydney’s Museum of Contemporary Art, received word of the premier’s announcement only a few hours before it was made.

“It’s been pretty … interesting,” she said. “We knew there were discussions going on in government and so it wasn’t totally unexpected. The surprise was the timeframe and what we have to do to get there. 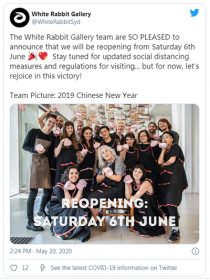 “Will we be opening on June 1 or sometime after June 1? To be honest, I actually don’t know right now. My guess is that it’s unlikely we’ll be able to open before mid-June.”

The MCA had already implemented social distancing protocols before its closure in March. MCA capacity will be limited to 500 people across all floors and spaces. “At least we’ve had a rehearsal of a sort, we have plans ready to roll,” Macgregor said, but she was reluctant to adopt pre-booking of viewing slots.

“For us, it’s not the technology required, it’s the philosophy,” she said. “We’ve always operated on the idea that the doors are open anytime. We want office workers to pop in during their lunch break. But if the government instructs us to do timed tickets, then of course we will.”

In the north of the state, the Lismore Regional Gallery is planning to reopen on 1 June with an exhibition devoted to the work of Queensland-based artist Ross Manning. However, if the Queensland border remains closed, Manning won’t be able to attend his own opening night.

“We got the double whammy of regional tourism opening up and being able to reopen the gallery,” director Brett Adlington said. “But we are really waiting for the border to reopen so we can get the day-trippers from south-east Queensland. At least we are only 30 minutes from Byron Bay, so we’re hoping to attract people who are coming to the area to visit family they haven’t seen for weeks.”

There is a lot of work to be done before then. Many regional galleries rely on volunteers, most of whom are older and may be vulnerable, Adlington said.

“They are keen to come back because they love it. But we need to keep them safe. We will have Perspex sneeze guards at the front desks and we will remove all the floor sheets and brochures that people pick up to read about the artists and take home.”

The art-making area for children will also have to go. “It would be impossible to keep that clean,” Adlington said. 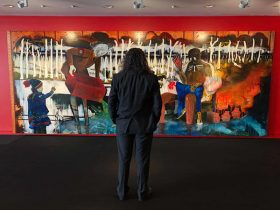 Some of Sydney’s big institutions are closed for renovation or relocation. MAAS/Powerhouse is unlikely to reopen at its current Pyrmont site. The Australian Museum is closed until November. Carriageworks recently went into voluntary administration. The National Maritime Museum plans to open from 15 June. Sydney Living Museums, including Hyde Park Barracks and Museum of Sydney, is still finalising reopening plans.

In Western Sydney, the Casula Powerhouse Arts Centre and Campbelltown Arts Centre are both ready to open from 1 June.

The Art Gallery of New South Wales will also open on that date, its director, Michael Brand, said. The 22nd Biennale of Sydney: Nirin and the exhibitions Shadow Catchers and Under the Stars (which opened briefly before the gallery closed on 23 March) will reopen alongside a new exhibition, Some Mysterious Process, which Brand has curated during the shutdown.

“The main goal is to make our visitors feel like they’re coming home,” Brand said. “It will be a little different. There will be timed ticketing to control the numbers of people in the building and we’re still working out the social distancing required – and there won’t be any cloaking. But the beauty of an art museum is that visitors tend to wander around the space and you can take multiple paths and directions. If you see three people standing in front of a painting, you can come back to that one. There is already some self-policing.”

Esther Anatolitis, executive director of National Association for the Visual Arts, said it was exciting to imagine spaces reopening, but there was a lot of work to be done.

“Not every gallery has the capability to implement timed ticketing – but more importantly, that’s quite a significant shift away from the welcoming, inclusive spaces that galleries offer.

“Visual art, craft and design spaces are freely open to everybody – there are no barriers. There needs to be good risk management in place, but for months now everybody’s been able to walk into a supermarket and touch anything they like without leaving their name at the door. So we need to be able to respond to public demand while applying safe practices that are consistent across industries.”