June 28th, 2017 | Browse other: News. | Tagged with: counting culture to death, the value of cultural organisations and events | 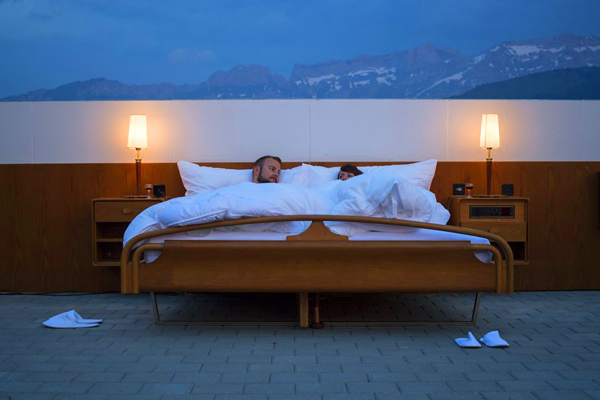 An installation by the conceptual artists Frank and Patrik Riklin: From the bunker to the countryside – with ‘rooms’ without walls or a roof. Ennio Leanza/EPA.

Julian Meyrick, Are we counting culture to death?, The Conversation, 22 June 2017

It’s a strange thing when the re-entry of genuine choice into political contests is framed as “anti-politics”. It feels more historically accurate, and logical, to see it the opposite way. For the past 30 years, a somnambulistic quality has hung over the West’s selection of its governments. This has been underpinned by the ascendancy of neo-liberalism and a battery of statistical techniques that have attempted to reduce fundamental social and moral questions to cost-benefit algorithms.

The wheels started to wobble in the Brexit vote. The hubcaps flew off when Trump occupied the White House. Now, with the recent UK election, the car is bumping along on a broken axle. Another seismic political event has confounded the purveyors of psephological predictive plausibilities.

Hence the conclusion something strange must be happening, rather than the more obvious one that an ideological realignment is in the offing.

For culture, it is also potentially a moment of reappraisal. For the past two years Laboratory Adelaide, an ARC Linkage project looking at the value of cultural organisations and events, has collected aggregate data and used the results to argue that in the affectless, distanced, hyper-functional policy process governments think of as hard-headed and objective, culture has some call on the public mind and purse.

But any measure of value is only as good as the collective understanding behind it. When this is warped, thin or non-existent, the numbers bend like a pool noodle, or reflect hidden agendas.

Sometimes, not so hidden. For the past 30 years, Australian governments have conflated the nation’s cultural creativity with its economic prosperity. This has promoted a mood of metrical madness – the measuring of anything and everything in a way that is methodologically suspect, morally insidious and not a little daft.

At Laboratory Adelaide we spend half our time reeling at what the debate about culture’s value has become: a tar pit of instrumental arguments, decontextualized data, and political opportunism. Even when it is well-intentioned, the techniques used seem at variance with the reality of what it is trying to capture.

Personally, I wonder whether all the industry reports, comparative analyses and impact studies are worth the reading of one book, the seeing of one film, or the hearing of one piece of music. Whether our attempts to replace the experience of culture with numerical proxies are self-defeating, even delusional.

Short of coming up with an alternative to metrical assessment – and Laboratory Adelaide can’t yet, but we’re on the trail – the least we can do is limit the value claims we attach to our numbers, and make stronger efforts to relate them to a cultural context.

In turn, governments can admit that the gains neo-liberalism has generated have led to more, not less, inequality, and a fall in standards of living for many, given wage stagnation and the stratospheric cost of housing. That’s the deal I’m offering: no more inflated multiplier formulas when making the case for culture, in return for no more pretending that current economic policies benefit most Australians when they don’t.

My concern is less for the fate of Australian democracy than the health of Australian culture, and finding a language in which we can meaningfully assess what we do in the sector. Language, not formula. There’s a place for quantitative data, just like there’s a place for election trend analysis, but trouble starts when the results are not underpinned by a genuine historical, social, and cultural knowledge of what is going on.

A phrase I came across early in my research into the problem of value – which is a problem as in “life is a problem”, i.e. it is one that cannot be solved, only better managed – is “multi-attributional policy outcomes”.

Which means not reducing everything to money. Money is important, in cultural policy as in every other area of executive action. However, money is rarely the point of culture. The endless attempts to justify investment in the sector by correlating outcomes with the number of hotel beds sold, or restaurants visited, is a downward spiral of evidentiary disintegration wherein our collective understanding of the activity in question is lost.

I don’t mind a metric. But our obsession with them in respect of culture is undermining societal decisions about it. Another way of saying this, is that you have to have a sense of value before you can have a measure of it, and not the other way round. You can’t work back from a number to tell you what that number means.

Or you can’t in culture, at any rate. And you can’t in elections, I’d suggest. You have to get away from graphs, tables and algorithms, and actually look at what is happening in the world.

This month, Laboratory Adelaide publishes two articles in the journal Cultural Trends, “Culture without ‘World’: Cultural Policy in the Age of Stupid” and “Counting Culture to Death: an Australian Perspective on Culture Counts and Quality Metrics”.