You are here: Home » Articles filed under: 'News' » Article: 'Countries demand their fossils back'

Countries demand their fossils back 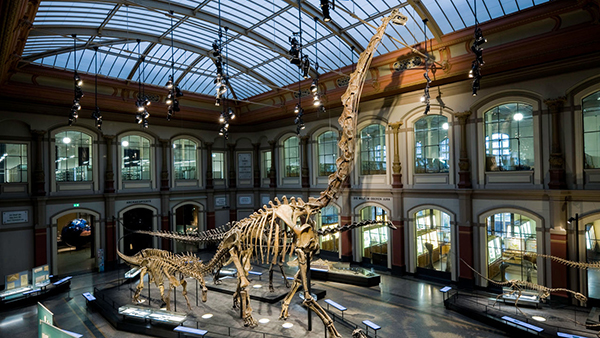 The story of Giraffatitan’s discovery in eastern Africa long ignored the crimes of German colonialism and the scientific contributions of local residents. Antje Dittmann/Natural History Museum.

The story of Giraffatitan’s discovery in eastern Africa long ignored the crimes of German colonialism and the scientific contributions of local residents.

BERLIN—Step into the main hall of the Natural History Museum here and you’ll be greeted by a towering dinosaur skeleton, the tallest ever mounted. Nearly four stories high and twice as long as a school bus, the sauropod Giraffatitan brancai was the largest dinosaur known for more than a half-century. It has been a crowd magnet since it was first displayed in 1937.

But the tidal flats Giraffatitan bestrode 150 million years ago weren’t in Europe. It lived in eastern Africa, today’s Tanzania, much of which was a German colony when the fossil was unearthed in the early 1900s. Now, some Tanzanian politicians argue the fossils should return to Africa.

Berlin’s Natural History Museum isn’t the only one facing calls for the return of fossils, which echo repatriation demands for human remains and cultural artifacts. Many specimens were collected under conditions considered unethical today, such as brutal colonial rule that ignored the ownership rights and knowledge of indigenous people. “Natural history museums as we know them wouldn’t exist without the colonial period,” says Holger Stoecker, an African studies expert at Humboldt University here. He says repatriation requests are prompting new questions about the stories of “discovery” that many museums have traditionally told. The discussion “is escalating right now,” and highlights that natural history isn’t “apolitical and neutral,” says Ciraj Rassool, a historian and museum studies expert at the University of the Western Cape in Cape Town, South Africa.

Although German paleontologists have traditionally gotten credit for discovering Giraffatitan, it was in fact local residents, who knew the bones and used them in religious rites, who guided the foreigners to the find, Stoecker says. He was part of a 3-year project to document the history of the “Tendaguru expedition” that shipped 225 tons of fossils to Berlin between 1909 and 1913. The project reveals how local residents’ contributions were erased. For example, expedition documents call another dinosaur “Nyrorosaurus” after Seliman Nyororo, a local man who led the 1909 excavation of the skeleton. That dinosaur is now on display here, but is named Dicraeosaurus sattleri after a German mining engineer.

Many of these objects were sent to Europe without much thought given to who might own them. The first Neanderthal discovered, for example, was unearthed in 1848 by a British lieutenant stationed in what was then the U.K. military base of Gibraltar. Some 70 years later, British archaeologist Dorothy Garrod found a Neanderthal child’s skull in a Gibraltar cave and also sent it to England for study.

At the time, Gibraltar lacked facilities to house the bones, says Clive Finlayson, a paleontologist and director of the Gibraltar Museum. Today, Gibraltar is still formally part of the United Kingdom, but it has significant autonomy and its own government. It’s also home to several Neanderthal experts, and part of the territory has been named a World Heritage Site because of its rich evidence of Neanderthals.

“These individuals should return home,” Finlayson says of the skulls. “They were discovered here. They were humans who were living here and died here.”

The London Natural History Museum declined to comment on any ongoing cases, saying only that it makes its collections available “through tens of thousands of items loaned each year, hosting thousands of scientific visitors to use the collections” and via online data repositories. Negotiations are ongoing, Finlayson says. “I remain optimistic.”

Chile is making a similar claim for the Mylodon remains. European explorers found them in the 1890s and shipped them home without permission from local authorities. They have ended up distributed among half a dozen museums in Europe. Chile retains a few smaller Mylodon bones and dung, but the spectacularly preserved skin specimens are a key part of its natural heritage, says David Rubilar-Rogers, director of paleontology at the National Museum of Natural History in Santiago.

The Chilean museum has successfully retrieved other fossils, Rubilar-Rogers notes. In 2008, the Senckenberg Museum in Frankfurt, Germany, helped Chile repatriate a specimen of Pelagornis chilensis—an extinct bird that is the largest known, with a wingspan of more than 5 meters.

Hendrik Poinar, a paleobiologist at McMaster University in Hamilton, Canada, who has sequenced DNA from Chilean sloth material in London, isn’t worried about the possibility that museums might have to give back key specimens. “The key is that [objects] are accessible for scientific study,” he says.

Giraffatitan, for its part, will likely stay put. Rather than press for its return, the Tanzanian government has said it would prefer support for excavating new fossils, training local paleontologists, and strengthening its museums. The Natural History Museum here will host two museum staffers from Tanzania as visiting scholars this year, says Director-General Johannes Vogel.

Meanwhile, Stoecker and Ina Heumann, the museum’s staff historian, are working on an expanded display documenting the dinosaur’s history. Stoecker also hopes to study the origins of the museum’s mineral collection, much of which was taken from Namibia during Germany’s violent colonial reign there.

Vogel says the collaboration with historians has paid off. “We want to encourage others to see what rich science there is in all of this,” he says. “There is more than just a natural science story to be told.”

*Correction, 28 March, 1:30 p.m.: This story has been updated to clarify the London Natural History Museum’s response to Science.