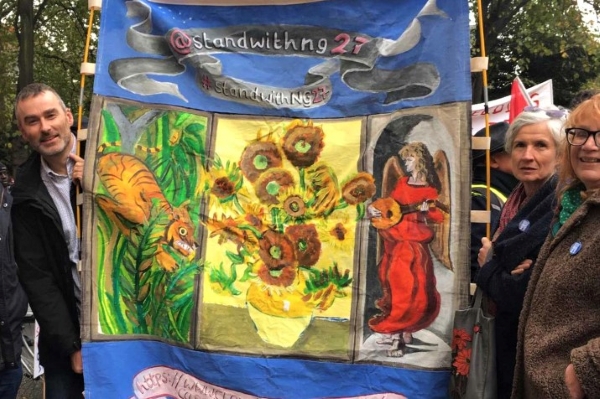 NG27 at the “Precarious Workers’ March” on October 30 (all images courtesy NG27).

The judge ruled that the group should be classified as “workers,” a role which entitles people to more rights than freelance contractors but fewer than full-time “employees.”

LONDON — A group of art educators has won a legal bid against the National Gallery to be recognized as “workers” rather than self-employed contractors in what is being called a landmark ruling on the public sector’s “gig economy.”

The claimants — 27 artists and art historians formerly employed at the National Gallery, now known as “NG27” — were dismissed in October 2017. They launched a crowd-funded legal campaign against the National Gallery, alleging unfair dismissal and discrimination and asking to be recognized as employees, or “workers.”

In yesterday’s ruling, the judge of the Employment Tribunal rejected the claim that the educators were unfairly dismissed. However, he concluded that it was “unsustainable” for the National Gallery to maintain the position that the educators were self-employed. He ruled that the group should be classified as “workers,” a role which entitles people to more rights than freelance contractors but fewer than full-time “employees.” Workers and employees enjoy benefits such as minimum wage, holiday pay, and protection from dismissal, which self-employed contractors do not.

The group members, many of whom ran workshops, public tours, and courses, claimed that they were required to fulfill responsibilities normally required of employees. They stated that they were paid through the National Gallery payroll and taxed at source, as well as being required to attend staff training and receiving formal reviews of their work. Between them, the 27 claimants collectively worked for the National Gallery for over 500 years — one claimant had worked at the institution for 45 years.

In a statement released on their crowdfunding page, NG27 said: “We are ecstatic to have received this judgment and of course are so grateful for the amazing support we have received over the last 17 months.” However, they added: “This isn’t the end of our fight and we still need to ensure that our full rights are acknowledged as a result of this judgment.”

Richard Stemp, one of the 27 claimants, said in an email to Hyperallergic:

We are, of course, delighted at the ruling. It’s hard to describe how it feels to have an institution that you have cherished, worked with and worked for for years treat you as if you had never really existed, but the recognition of our status goes a long way towards a recognition of the important role we played.

Many see this ruling as having broader implications for those in insecure employment, in the arts as well as other industries. Marie van der Zyl, a partner at Ince Gordon Dadds LLP and the claimants’s legal representative, wrote in a statement, “This is an important case for all those who have unconventional working arrangements. The world of work is changing and there will be many individuals who are unsure of their status and rights. This case gives those individuals hope.”

The National Gallery saw the ruling as a victory in favor of the gallery on the basis that the judge had ruled that the educators were “workers” rather than full-time “employees.” In a statement emailed to Hyperallergic, the institution said: “The Gallery welcomes the clarity provided by this decision, namely that the claimants in this case were not employees of the Gallery.”

The National Gallery, one of the world’s leading museums of Western European art with works by Rembrandt, Michelangelo, and Cézanne, is one of the most popular museums in the UK. It hosts around two million annual visitors and is predominantly funded by the Department for Digital, Culture, Media, and Sport, receiving £24.1 million (~$31.6 million) in grant-in-aid funding in 2016–17.

The National Gallery also forcefully rejected comparisons with other “gig economy” cases, such as recent lawsuits brought against Hermes, Uber, and Deliveroo. A spokesperson for the Gallery told Hyperallergic:

It is important to state that this case should not be likened to the ‘gig economy’ debate…In fact, the National Gallery situation is exactly the opposite. The ‘gig economy’ cases have arisen out of organisations’ opting to offer people ad hoc employment, zero hours contracts and no opportunity for job security. We have taken a deliberate choice to move towards a model that offers people secure employment, with additional pension and worker benefits.