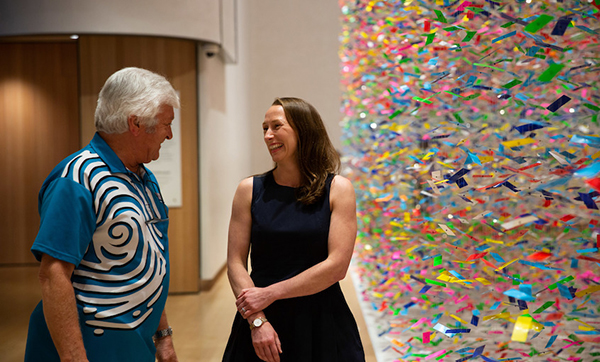 Jeremy Rose, Courtney’s Place: Te Papa’s CEO on leading the national museum out of Covid, The Spinoff, 16 May 2020

When Te Papa reopens shortly, it’ll mark the end of the first big test of new tumu whakarae/chief executive, Courtney Johnston. Jeremy Rose spoke to Johnston about her vision for the museum, the impact of the pandemic, the return of taonga and making good on the Treaty.

In 2016 a Hawaiian delegation came to collect two of the rarest, most precious items from Te Papa’s collection: an ‘ahu’ula (a cloak made from more than four million feathers) and its matching mahiole (helmet) gifted to Captain James Cook by the high chief Kalaniʻōpuʻu, aliʻi nui in 1779.

Officially the taonga are now on loan to the Bishop Museum, Honolulu, but at the handover ceremony Marques Hanalei Marzan, a cultural advisor at the Bishop, told me the cloak and helmet were going home for good.

Courtney Johnston, who took over as Te Papa tumu whakarae/chief executive in December, agrees that’s likely. It’s the way things should be, she says. 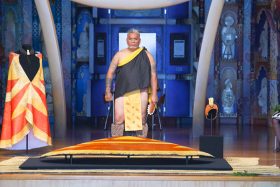 A SCENE FROM THE POWHIRI FOR THE HAWAIIAN DELEGATION DURING THE HANDOVER OF THE HAWAIIAN TAONGA AT TE PAPA, MARCH 16 2016. (PHOTO: NORM HEKE/TE PAPA).

The return of taonga is a sign of just how much New Zealand museums are changing, and how they are now at the forefront of an international movement for museums to rethink their relationship with their collections.

In March I sat down with Johnston to talk about those changes, her vision for Te Papa and the wider museum and gallery community. The full impact of Covid-19 hadn’t yet hit. Preparations were underway for what looked like a period of extra hygiene vigilance, but nothing like the coming shutdown.

Six weeks later, it seemed a good time to resume the conversation and take a look at what the post Covid-19 world might look like for museums. As a former director of Dowse Art Museum in Lower Hutt, a past chair of umbrella group Museums Aotearoa, and an astute thinker and writer on the arts and museums, she’s uniquely well placed to explore the topic.

The epidemics of the 19th century transformed the world’s cities, as town planners and architects responded to public health disasters. I asked Johnston: will the pandemic have similarly long lasting impacts on museums and art galleries?

“There’s a lot of international chatter about the move over the last 20 or 30 years towards the more interactive hands-on participatory museum and whether that will or won’t stay a feature of museums [post Covid-19],” she says.

“There are some people who very definitely say ‘it’s over, you’re going to have to think of something else’ and then there’s others who say ‘humans are humans are humans and they want to do things like this.’ So that’s the crystal ball gazing my design team is already thinking about.”

For Johnston, the most important change won’t be physical but philosophical. “What we do now shouldn’t be just about the next six months but about adapting in such a way it will take us forward for the next 10 years. It has to be bigger than hand sanitiser and cleaning regimes.

“The language of the last 10 years has been about return on investment and that’s usually in terms of numbers through the door, hotel nights – your economic benefit. If return on investment can look more like partnership and shared outcomes, then the investment that’s going on at the moment becomes about making everything and everyone better. That would be a positive outcome for me.”

That might, she seems to be suggesting, require a rethink of how galleries are funded.

“At the moment wherever you are in New Zealand your access in terms of physical spaces to our culture is very dependent on the mood of your local council. So it’s really uneven. You have some cities and towns that do amazing jobs and others that are quite strongly anti art. If some sort of evening-out can come out of this that would be kind of amazing.”

The reality right now is that museums and art galleries around the country are seeing their budgets slashed. Johnson says she’s hearing of museums and galleries being asked for budget cuts of between 10 and 20%.

New Zealand is lucky, she says, with most cultural institutions receiving the bulk of their funding from the public purse, be it local or central government. But that core public funding varies “from, say, 20 to 80%”.

And the philanthropic and sponsorship funds that make up the bulk of the difference are drying up. Airlines, for example, have been enthusiastic sponsors in the past. It’s hard to see that funding returning any time soon.

Johnston says drops in core funding combined with falls in other revenue means some galleries are facing budget cuts of up to 50%. “It would be a rare museum that’s not facing some sort of economic pinch at the moment.”

With slashed budgets, pandemic hygiene requirements, and the prospect of a very different visitor profile for the foreseeable future, Johnston thinks there will be a trend towards more locally focused exhibitions.

In a normal year 50% of Te Papa’s visitors are international tourists, 20% New Zealanders from out of town, and the remainder Wellingtonians. At this stage Te Papa hasn’t cancelled or postponed any shows, but it still might, Johnston says, suggesting the much-hyped Surrealist exhibition set to arrive from Rotterdam in December could still be pushed back.

Freight could prove a problem, but Johnston says the bigger issue is the restriction on crowd sizes. “It’s not just the economic side of it, it’s also the social side. I’m aware of projects that are about celebrating the life contribution of senior artists, so you kind of don’t want to do that under level two when people from all over the country can’t fly or drive to congregate somewhere and share in that moment. So projects like that are getting pushed out further.

“Every museum is shuffling its programme around at the moment. Extending shows, pushing shows out, going for cheaper shows rather than more expensive shows.”

On a positive note, Johnston thinks creative people often like having to work with limitations. “There’s something quite nice about not having the pressure of having to put a blockbuster on and instead go ‘OK, what can we do within these parameters?’”

Before the Covid storm 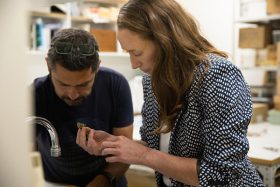 TE PAPA CEO COURTNEY JOHNSTON EXAMINES AN OBJECT IN ONE OF THE MUSEUM’S MANY BACK ROOMS (PHOTO: JACK FISHER/TE PAPA). 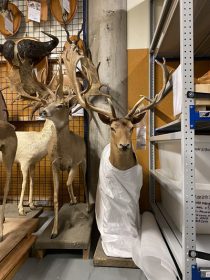 Before the Covid storm hit, Courtney Johnston was plainly enjoying herself in her new role. In January, happily tweeting from the vertebrates storeroom, she sounded like a kid finding herself in charge of a lolly shop.

“Collections are magical,” she says now. “And the people who work with them are pretty magical too. When I was out at the Dowse I had all the access I liked. If I was having a bit of a shit day often I would go down to the collection store and kind of fossick around and find something that would lift me outside of what was going on inside my head – and reinforce that feeling of being a temporary part of what’s here to last forever: here to sustain a community and a public for a long time.”

There’s a sense of wonder and delight that animates Johnston’s conversation. It’s a common quality in artists, but not so much chief executives. Knowledge and thoughtfulness about the place of museums and galleries in the world also sets her apart from her immediate predecessors, Geraint Martin and Rick Ellis, who came to Te Papa from jobs at a DHB and a telco respectively.

Her appointment is a hopeful sign that others share her view that museums aren’t just another business.

From tour guide to chief executive 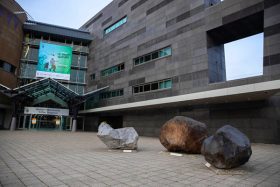 Twenty years ago, as a university student, Courtney Johnston had a part-time gig as a visitor host at Te Papa. It was then she first became aware of the significance of the three boulders that stand outside the entrance.

Johnston says Te Papa is in a continuous process of returning taonga to their iwi. “A taonga gets its mana – its power – from its connections to its people. Which is different from how museums were set up, where objects get their power from the authority that researchers place on applying their knowledge to that object.”

Te Papa’s Māori collection is now considered to be on loan. “The hapū or iwi have easy access to whatever they want to. And Te Papa is negotiating all the time about repatriating taonga back to their communities.”

The Hawaiian ‘ahu’ula and mahiole are far from the only taonga being returned to their rightful owners. Te Hau ki Turanga – Aotearoa’s oldest wharenui and a masterpiece of carving – will be heading home to Tairāwhiti in the near future, more than a century and a half since it was stolen from the Rongowhakakaata iwi by James Richmond, the minister of native affairs, and placed in the Colonial Museum in Wellington.

The Ministry of Culture and Heritage is even facilitating the return of an Egyptian mummy, gifted to the Colonial Museum in 1885.

It’s a major point of difference with one of Te Papa’s tīpuna, the British Museum in London. Famously, that museum insists it is the rightful owner of the Elgin Marbles taken from Greece by a British nobleman in 1801. So if the Elgin Marbles had found their way into the Te Papa collection? “I’d return them home,” says Johnston.

“The British Museum will say, ‘no actually the best place for all of these things from all over the world is here. Because we can create the context from which people can understand them.’ And you’re like: ‘What about the context that they were made in and the people they were taken from?’.”

Johnston notes that the legislation behind Te Papa, unlike that for Auckland Museum, does not mention the Treaty of Waitangi. “I think in some ways our bicultural kaupapa – the way that it was baked into our foundation, the structure of the building, our co-leadership model, which is not legislated – is something that was opted for.”