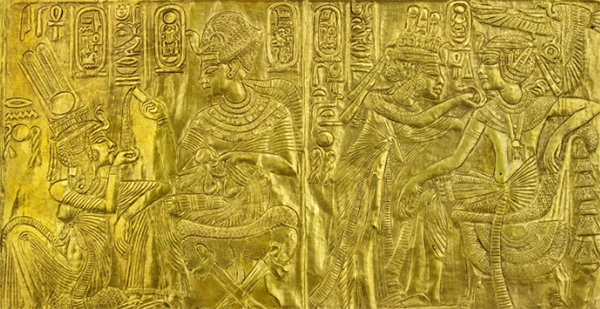 A gilded wooden shrine with scenes of Tutankhamun and Ankhesenamun that was due to be part of the exhibition coming to Australia. Credit: Laboratoriorosso, Viterbo, Italy.

Linda Morris & Melanie Kembrey, Curse of the Pharaoh: Sydney’s summer of blockbusters is over, The Age, 5 June 2020

The highly-anticipated King Tutankhamun exhibition that was set to be the crowning glory of the Australian Museum‘s $57 million renovation has been postponed due to the coronavirus pandemic with no future date set.

The shelving of the blockbuster means that Sydney’s summer of big-ticket exhibitions is over, with the Museum of Contemporary Art and the Art Gallery of NSW confirming they are seeking to reschedule their exclusive end of year exhibitions.

Tutankhamun: Treasures of the Golden Pharaoh was to have opened in Sydney in early 2021, the fifth destination in a 10-city world tour to mark the centenary of the discovery of Tutankhamun’s tomb in 1922 by British archaeologist Howard Carter.

The show was billed as the “largest and most impressive” Tutankhamun exhibition to ever leave Egypt, and the last time the objects would travel globally before they became part of the permanent collection of the new Grand Egyptian Museum in Giza.

But the exhibition has been in lockdown at the Saatchi Gallery in London since early March, and the Egyptian Ministry of Antiquities is keen to have the artefacts return home as construction of the Grand Egyptian Museum nears completion.

Exhibition organisers IMG confirmed the artefacts were being stored in London and the Boston and Sydney openings would be postponed due to the health concerns and uncertainty caused by the global health crisis. 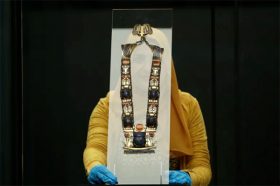 Restorer Olfat Mohamed with an artefact that is part of the Tutankhamun: Treasures of the Golden Pharaoh exhibition at the Saatchi Gallery in London. Credit: AP

“As you can imagine, staging an exhibition of this stature is very complex, with the schedule planned years in advance,” IMG said.

“We are in discussions to determine next steps with our partners at the Ministry of Antiquities, as well as those in host cities including the Australian Museum.”

In a statement, the Australian Museum and Destination NSW said they were working with IMG and hoped to confirm more details as soon as possible.

More than 2.7 million visitors went to see Tutankhamun’s treasures in LA, Paris, and London before the lockdown. As many as 800,000 visitors were expected to flock to the Sydney show, which was cited as a prime reason for a $57.5 million upgrade of Australia’s oldest museum, including alterations now underway to the Crystal Hall and the central circulation space that are on track to open in spring.

The museum’s Pacific collection was controversially relocated as a result of the expansion. Former arts minister Don Harwin declared the exhibition a game-changer.

“The safety of our visitors, partners, staff, and these priceless artefacts remains our top priority, and we are working hard to be able to confirm more detail as soon as possible,” producer IMG said in a statement.

The Australian Museum is trying to lock in another exhibition to take it place but coronavirus has shrouded forward schedules in uncertainty as international border closures, mandatory quarantine and health concerns are making it difficult to bring significant works and artists into the country.

Such blockbuster exhibitions are often several years in the making and galleries and museums rely upon them to bring visitors through their doors each year.

The Sorrows of the King by Henri Matisse (1952) was due to be on show in Sydney in November.

The AGNSW said it was in discussions with France’s Centre Pompidou to find a new date for its exclusive Matisse: Life & Spirit, which was due to open in November and would have been the largest single exhibition of Matisse’s work to be held in Australia.

The MCA has pulled the pin on its Doug Aitken exhibition, which would have been the American artist’s first major survey of his artwork in the Southern Hemisphere. To take its place, the MCA plans to bump its major survey of Australian artist Lindy Lee from July to October, with the hope of reviving the Aitken show for winter next year.

Both exhibitions were part of the state government’s annual Sydney International Art Series, which has been a regular fixture on the cultural calendar since 2010 and has attracted more than 2.3 million visitors to both galleries and 219,000 overnight visitors to the city.

The death of the blockbuster, at least in the short term, is likely to result in more Australian-focused shows, and greater loans between Australian institutions.

The NGV has rescheduled its exhibition of French post-impressionist painter Pierre Bonnard exhibition, due to open on Friday, to 2023.