You are here: Home » Articles filed under: 'News' » Article: 'Creative economy accounts for 23% of GRP'

Creative economy accounts for 23% of GRP

April 21st, 2022 | Browse other: News. | Tagged with: Creative workers accounted for nearly one quarter of California’s economy in 2020 report finds, latest edition of the annual Otis College Report on the Creative Economy | 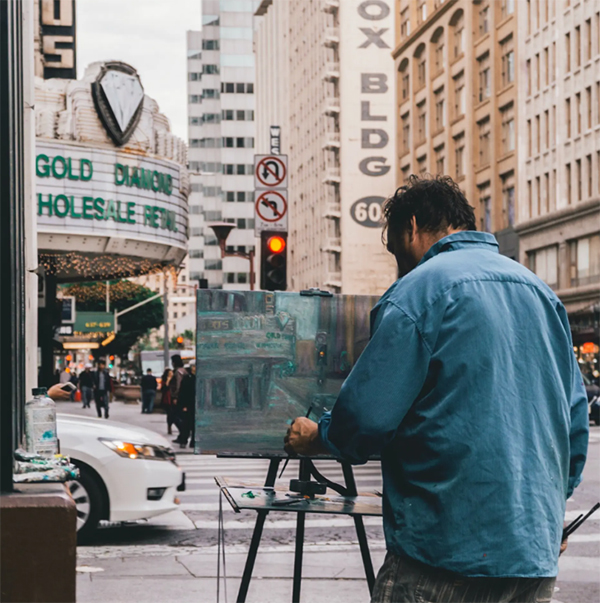 An artist paints on the streets of Los Angeles. Photo by Brian Gordillo on Unsplash.

The latest edition of the annual Otis College Report on the Creative Economy makes the point that even as California’s arts sector bounces back, long-term support is needed to ensure it truly thrives.
The Otis College Report on the Creative Economy—an annual report that looks at the economic impact of the creative sectors across California—was released today, and despite dire early pandemic statistics, such as Los Angeles losing nearly one fourth of its cultural workforce as a result of Covid-19, the 2022 report paints a picture of the sectors’ resilience and of their disproportionately large impact on the state’s economic well being.

The five creative industries studied in the report are entertainment and digital media, fine and performing arts, architecture and related services, creative goods and products, and fashion. The report points to varying degrees of hardship across all five. Fine and performing arts—which had been the fastest-growing of the five sectors prior to the pandemic—was the hardest hit as it saw a loss of nearly 20% of its workforce amid pandemic shutdowns, while architecture, for instance, lost just over 2% of its workforce.

Similar to trends seen across the nation, California receives a remarkably outsized percentage of its overall economic output from the arts—the report says that, after accounting for business-to-business transactions and employee spending, the 7.8% of statewide workers who occupy the creative sectors accounted for nearly 23% of the state’s gross regional product (GRP), or $687.6bn, in 2020.

“Yes there are things we get from arts and culture that are beyond their economic value, but at bare minimum let’s also articulate what that value is so that we’re taken seriously rather than something that’s just nice to have if we can afford it,” says Adam Fowler, a partner at CVL Economics, the economic research and planning firm that authored the report. “How do most states approach the arts? It’s a line item to fund some nonprofits. And that funding is very important, I don’t want to dismiss that, but that is just scraping the surface of the kind of economic development value that is in these creative economy sectors.”

A number of these sectors have still not gotten back to where they were prior to the Great Recession that began in late 2007, when the first of these annual reports was commissioned and when state and federal arts funding were often among the first things on the cutting board.

“So much of our dialogue across sectors of the economy is trying to understand what we peg recovery to. The monthly jobs report will give you some sort of percentage of the jobs that were present in February 2020 that have been recovered, and we peg our goals to those pre-pandemic months, but you can see the policy decisions after the Great Recession never allowed some of these creative sectors to recover,” says Fowler. “So while we may say that it’s a win to paddle our way back up to the levels of employment found in February 2020, for some sectors of the creative economy that’s not necessarily the best benchmark for health. Looking back over the last 15 years, there are sectors that never fully recovered from the Great Recession, so we shouldn’t be bound by jobs numbers of February 2020 as the goalpost for a healthy recovery.”.”

Fowler believes that a great deal of the hardship at play in such a picture may stem from a latent skepticism as to the viability of creative trades.

“If I were to go to the government’s office of business and economic support and look at trade, I probably would not find any of the words that would signal creative firms or industries there. There’s a big question as to why that is, because the creative sector could use that support, especially the small businesses, just as much as any other industry sector,” he says. “We’ve got to invest as a country in opening up those workforces and other opportunities for folks to engage in those creative activities in the economy, because they’re just so important.”

The report ultimately paints a picture of the arts as an undeniably vital part of California’s financial health, despite being continually treated as an economic afterthought. And while funding from the CARES (Coronavirus Aid, Relief and Economic Security) Act kept these sectors afloat, an investment that returns the arts to their pre-pandemic state of treading water remains insufficient.

Among its many recommendations, the report suggests investing in future talent and minimizing the obtuse gatekeeping that has kept individuals out of these sectors by taking actions such as investing in community colleges and supporting small businesses and entrepreneurs across the creative landscape. It recommends aiding arts nonprofits in their digital literacy as one’s online footprint continues to grow in importance, and reserving space for the arts by expanding the supply of affordable housing and commercial space available.

The report implies what might be most vital of all is a shift in thinking that acknowledges the arts as a bedrock of society and invests accordingly. “We need to get away from the idea that the arts are some sort of luxury,” Fowler says.