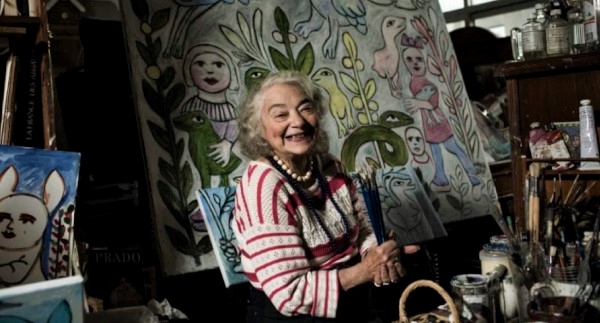 Mirka Mora in 2014 in her Richmond studio. Photo: Josh Robenstone.

The artistic director of the Heide Museum of Modern Art says she is overwhelmed by public donations enabling the purchase of key artworks and personal items of the late artist Mirka Mora.

Mirka’s family have approved Heide’s purchase, before Sunday’s auction at Leonard Joel, of 31 pieces from the contents of Mora’s Richmond studio.

It will mean that a permanent display on the much-loved Melbourne figure will go ahead at her beloved Heide at Bulleen.

Heide’s purchases include one of the auction’s highest valued pieces, a Sidney Nolan painting on slate, Figure With Flowers, valued at up to $60,000, that had been unknown before it was discovered in a studio drawer.

A crowdfunding campaign titled Mirka For Melbourne, started by blog The Design Files last Friday, hoped to raise $100,000 to keep some of Mora’s most treasured possessions in public hands. It smashed its goal, raising over $177,000, so far.

Also purchased by Heide are Mora’s last painting, some of her dolls, her easel and palettes, a paint box and a pair of boots.

Heide artistic director Lesley Harding said: “We have been overwhelmed by the response and the fondness with which people have spoken about Mirka, and their desire to see her legacy preserved for the future. It’s been very touching.

“I’m absolutely thrilled that the public have come to helps us to acquire this amazing material, so that Heide can represent Mirka in a really full and beautiful way, for future generations.

“We’re a public institution, a not-for-profit. We don’t have bundles of money to go out and buy things as they come up.”

Mirka’s son William Mora said he was delighted with the result.

“To have our dream of a Mirka museum at Heide realised by the people of Melbourne is as humbling as Mirka being the only woman artist to be offered a state memorial.”

“Mirka can now take her deserved place amongst the great artists of the Heide era.”

The campaign also purchased for Heide the 1970 painting When the Soul Sleeps, considered one of Mora’s most significant works, and her letters, diaries and photos, all of which hadn’t been included in the auction.

More than 700 lots of Mora’s art, other artists’ works, a bicycle, furniture, dolls and books will still be auctioned at Leonard Joel in South Yarra on Sunday.

An initial Mora display at Heide will open within months at the former house of Mirka’s friends, Sunday and John Reed, situated on the museum premises.